What? A new blog entry? And a new Lohr Woodworking sign? Yes.

Hey kids, I've missed ya! After a brief lapse in blog upkeep, I am back and ready to update you guys on the regular. Are you ready? 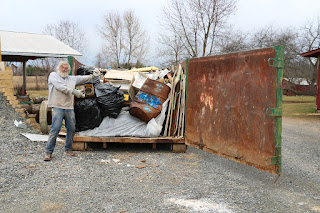 To summarize the past two and a half months: The tail end of winter was cold. There was more snow than we/anyone would have liked. We did a massive spring clean of the barn/slab storage space, show room, and shop (we brought in a 4 ton dumpster and everything). It got a little bit warmer and then it got hot. It's still very, very hot.

I must, of course, take the time to acknowledge our ever-wonderful and most recent Lohr Woodworking School graduates that have joined us over the past few months. We have been grateful to spend time with three new Practical Woodworking classes, one Advanced Joinery class, and the second-ever Veneer & Cabinetwork class all since the start of the year. Thank you, as always, to our students for being motivated, excited, skilled, interested, and oh-so fun! 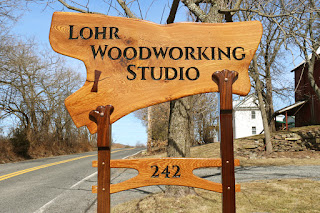 Another mission accomplished during the first few months of this year: A new sign at the road for the Lohr Woodworking Studio! Starting with an oak crotch slab, we began by using our router sled jig to level and flatten the faces. Then, after some sanding, we took to our usual repairs and split-strengthening with an inlaid dovetail bone and some sawdust-infused epoxy. After the repairs were complete and dried, I took over the lettering while Jeff & Rob started in on the base. 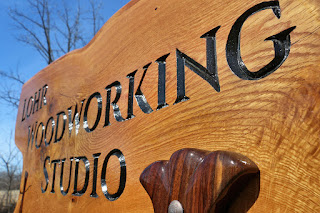 As far as the lettering goes, let me just say that this project deeply strengthened my ever-lasting relationship with plunge routers. First, we collectively decided on the lettering, spacing, and layout and then used a video projector to shine the words up onto the slab. I traced the text with a dark colored pencil onto both sides and made sure to trace those same letters onto a spare piece so I could practice and get the adjustments on the router just right before committing to the real deal. 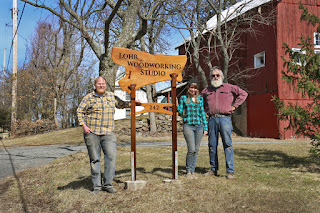 I used a 60-degree v-groove bit and set a maximum plunge depth where the heaviest weight-of-line was in the lettering. So, basically, I picked out the thickest part of all the letters (I think it was the lefthand side curve of the 'G') and plunged the bit down until it was cutting the entire width between my traced lines, then set the depth stop there. From there, it was all free-hand routing. Without using guides or jigs, I relied on a somewhat steady hand, a lot of light, my dark lines, and some patience to cut the letters into both faces of the slab. I never locked the router at any certain depth; Instead, I plunged and lifted the bit gradually as I pushed forward and the weight of the lines changed. For sharp pointed corners, like in the 'N', I started at the smallest outer tip of the point and gradually plunged the bit deeper while moving it forward to create the pointed slope. It took a few hours and a bit of touch up with a chisel afterwards but, it's legible so I'm content with the results. Who needs a CNC right? You can watch me tackle this routing endeavor in the timelapse I shot to condense the few hour process into 2 minutes. Watch it here or scroll down to the bottom of this entry! 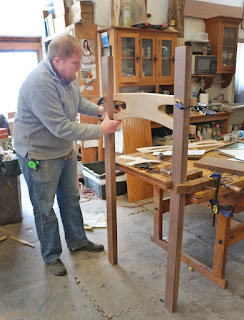 Meanwhile, Rob & Jeff were designing the base. The first obstacle was to find a means to display the house number in a way that was clear and married well with the live edge of the oak slab. Naturally, they nailed it. With a shaped and curved piece that keeps the legs parallel as well as looks awesome, obviously! Then, Jeff took over shaping some seriously cool, organic looking clamping pieces to hold the slab at the top. A carved clamping upright was attached to both the front and back at the top of each leg. They extended above the legs so that the slab could slide between them, rest on the tops of the legs, and a bolt could be fastened through-and-through each side of the clamping pieces as well as the slab to hold it firmly in place. 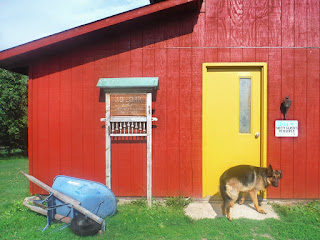 The finishing touches included applying boiled linseed oil to the whole project, letting it dry for a week, and then starting the finishing process. For a project like this, that will face all the natural elements, extreme weather, and live beside the road, we opted for marine varnish to create a strong, waterproof barrier and extend the life of the vibrant sign. After the first coat of clear finish dried, we painted the inside the lettering with black paint to make it easy to read from afar. We waited after the first coat of finish was applied so that it was easy to wipe away any paint that may find it's way outside the lines in the process. After the paint dried, the next two coats of finish were applied and it was ready for action!


No worries, folks, this doesn't mean goodbye to the classic JD Lohr Woodworking sign that we all know and love; It has found a new and distinguished home next to the door as to welcome us all as we enter the Lohr Woodworking shop.


Here's the timelapse of me routing the 'Lohr Woodworking Studio' lettering into our new sign: