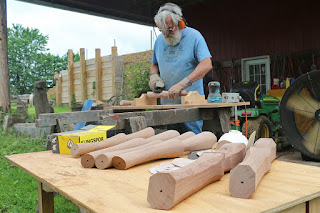 The story of this Lohr Woodworking Studio made live edge walnut table begins with the legs. Inspired by a photo of a unique table he stumbled upon in a book last year, Jeff has been hard at work creating his own take on this organic style, angled leg. After weeks of experimenting, he produced one in the shape and style he wanted, so the next step was to come up with a system to make groups of four matching legs in a timely manner. As each leg must be hand-shaped and the angle cut mid-way down each leg must be maintained (to remain matching and consistent), it hasn't been the easiest task. But, this is Jeff Lohr we are talking about here so of course he did it. With the initial cuts made on the table saw, he then crafted a lathe-style holder to be able to rotate the leg as needed as he did the initial shaping with a disc grinder. Then, he used a random orbit sander to really achieve that smooth, rounded, organic look he wanted. 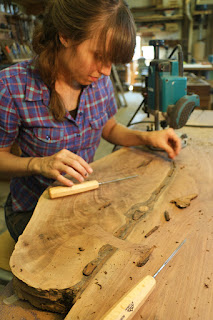 Naturally, what better matches these finely shaped stem-looking legs than a funky live edge slab top? Coincidentally, we had a kind gentleman swing by the shop a few months ago with a couple of live edge walnut slabs that "he had had for years with the intention of making something with but never got around to it" so he thought we might be able to put them to good use. What a thoughtful and kind donation! And, yes sir, we absolutely can. Here was our perfect chance.

As with all of our live edge slabs, there are always splits and voids to be repaired and strengthened so they don't worsen over time with the expansion and contraction of the grain. So, as is my favorite thing to do, I took to the router and inlaid some dovetail bones across the crotch and end splits (more detail on bone inlay here). Then, I had to tend to the space between the separated split where bark had partially filled in over the years of growth but in the milling process had been left with some voids. The voids and holes needed to be filled in order to stabilize the space between the split so that the rest of the natural bark didn't crumble and fall out over the lifetime of the table. 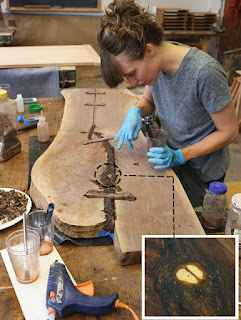 One of the things that caught our eye most about this particular free form slab was the walnut that had fallen and gotten itself captured within the bark as it continued to grow between the split. When the log was cut apart into slabs, the nut was cut in half and a perfect view of the inside of the light-colored walnut was exposed amongst the dark bark. Based on the annual rings from the outer edge of the slab, the walnut fell into the crotch of the tree around 17 years before the tree was cut down and remained cozy, trapped within the bark pieces until the log was made into slabs. And, thus, the table was destined to carry the name "Buried Treasure", coined by the ever-genius Linda Lohr.

To accent this unlikely (and awesome) detail, we tested various combinations of saw dust with epoxy until we arrived at a proper walnut color to fill the empty spaces within the shell and create the gem pictured to the left. Jeff even added some glitter to maintain the crystallized sparkle effect that the petrified nut had left behind. As the only girl in the shop (and to feed into a definite stereotype with no shame), I am psyched about the idea of including sparkles in our furniture. As for the remaining voids within the bark, I carefully chose chunks, slivers, and crumbles of walnut bark to patch the areas as precisely as possible. The rest of the tiny spaces were filled with an epoxy/bark/sawdust mixture that would cement all the contents of the split together and bind it to the slab itself. 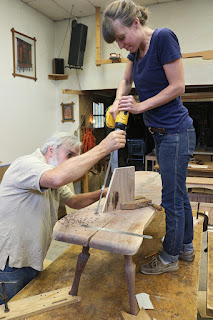 When the top was finished and complete with bones and a stabilized, bark-filled split, it was time to attach the all-new Jeff Lohr legs. For the initial attachment, we drilled 1/4" holes through the table top and into the tops of the legs at the same angle at which the legs splayed. Then, we used epoxy to attach the legs to the bottom side of the slab with 1/4" dowels as the connecting joint. Of course, 1/4" dowels aren't strong enough to support the weight of the table top (and whatever contents it is destined to hold) for long but, the idea was to then drill 1" holes through the top and deep into the legs and use stronger dowels to attach the two.

Once the epoxy had cured for 24 hours, we used a spade bit with the aid of a plywood angle guide to drill the necessary angled holes down through the top and into the legs. I must say, this was the most nerve wracking part for the girl holding the drill because I could have easily ruined the top and/or blow through the side of the legs instead of hitting it centered on the top. Thankfully, all things went smoothly- mostly because we quickly learned how necessary it was to have rests clamped to the table (as seen in the photo) for the splayed legs to push against as the force of the drill and the weight of the table top pushed downward. 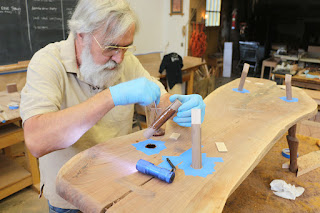 Jeff then took the 1" walnut dowel rod, cut sections to length to fit the length of the hole we drilled, and cut kerfs down into the top ~2"of each length. The kerf allowed for a place to drive a maple wedge down into the top of the dowels as they were tapped down into place. The wedge effectively locked the dowels tightly into place so they would maintain the joints' strength over time. As you can see in the photo, Jeff used epoxy to ensure these guys were held in tight- he coated the hole down into the leg as well as the dowel. Then, with the wedge in place, the dowels were tapped all the way home and sanded down to be level when the epoxy had cured. 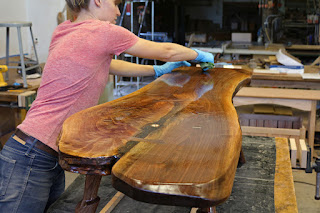 Then, the always-fun part: boiled linseed oil! The whole table was sanded down to 220 grit and coated in a mess of BLO. The funk-tastic grain patterns around the crotch as well as the the color value in the straighter walnut grain was perfect. I am always a huge fan of the reds, golds, and deep browns of air dried walnut and how it fades so nicely into the lighter toned sapwood out toward the live edges. In this case, we were all most excited to see how the contrast between the walnut carcass and the dark bark inclusions would pop. If I have learned nothing else from my few years so far in the trade, it's that nature will always produce wonderful and beautiful things that we are damn lucky to be able to preserve and put in our homes to admire. 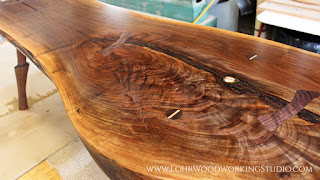 And, the clear film finishing process begins today. This beaut will be finished up just in time to show the greatest people in the world- the Long's Park Arts & Crafts Festival goers! We are always excited to bring new pieces with us to mix in with some of our classics so, if you live in the area, be sure to schedule the festival into your Labor Day Weekend plans and see "Buried Treasure" up close and in person. If you live far away... well... you should schedule the festival into your Labor Day Weekend plans too. Take a trip. Treat yourself! See some art, buy some furniture, listen to some music. All the cool kids will be there!