We all survived Veneer & Cabinetwork! 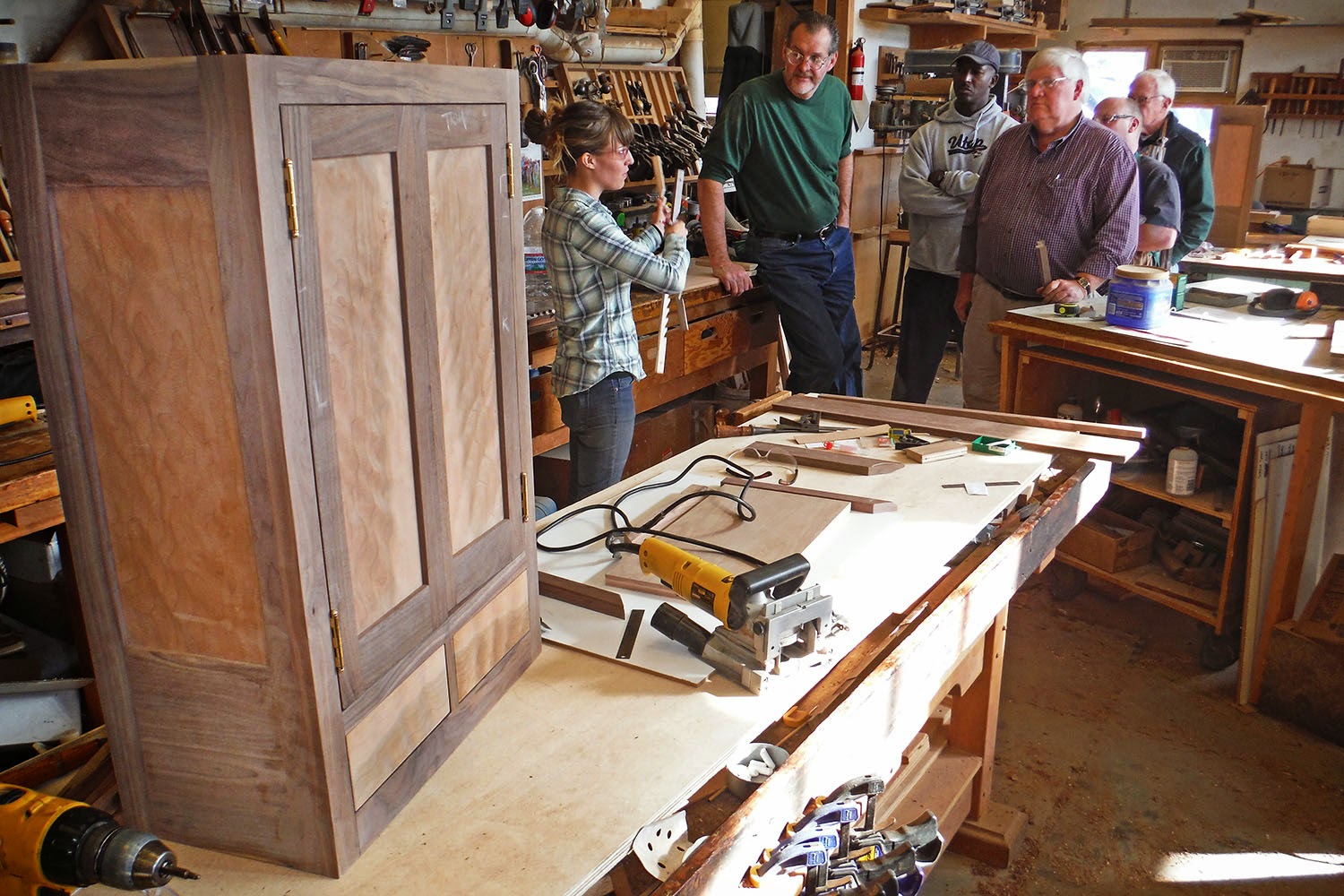 Last week was the official launch of our Veneer & Cabinetwork, third-level woodworking course! After weeks of building and rebuilding the veneer wall cabinet in order to organize lessons and procedures for the class, we were excited to open the doors on Monday morning to welcome back our eight, lottery-winning alumni. A huge applause goes out to these gents for pioneering the course and persevering through such a complex and challenging project with us. The week was jam-packed and a new experience for all, but there's nothing quite like a Saturday afternoon with a shop full of new and beautiful veneer cabinets ready to find their way home. 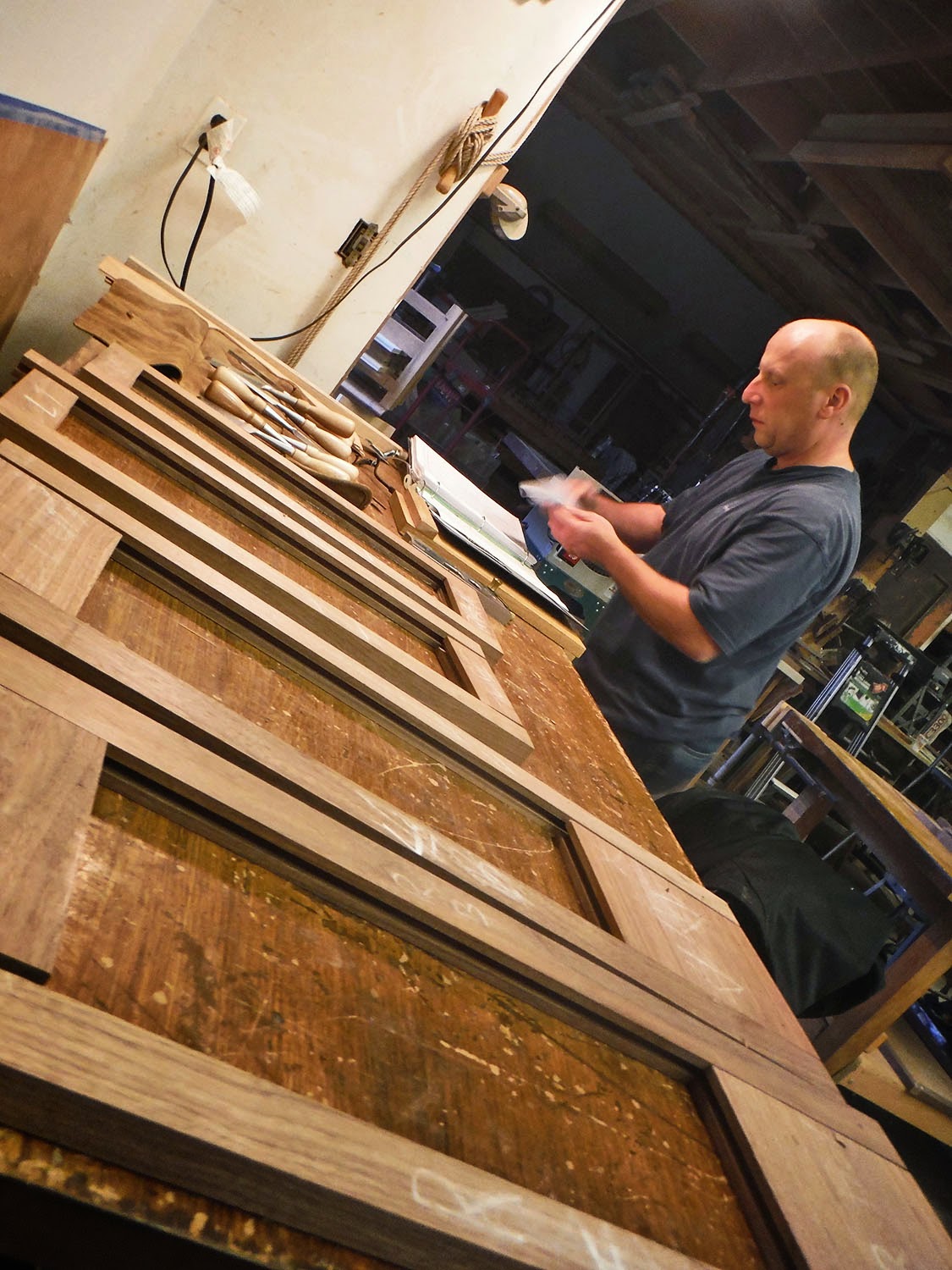 The week started with the basic cabinet carcase layout and joinery. As I said in my last post, we had prepped a pre-milled pack of walnut parts for each student during the weeks prior. Students returning to us for a third time are expected to know how to mill and square parts with relative ease, so to save the time, we do some of the dirty work for them. This is in no way a paint-by-number type of course so the parts they received were roughly sized and without any assigned placement in their project. The first task for students was to tackle the layout. They had to consider the grain patterns and color tones of the walnut parts as they decided where each rail, stile, and mullion would live within the cabinet's carcase. Which faces would look best and should be presented toward the front? Which pieces match best to serve as stiles for the cabinet doors? Are there any knots or flaws that should be hidden toward the inside or back of the cabinet? When all elements were considered, students then labeled their parts and moved onto plows (to accept the panels) and joinery. The complexity of the mortise and tenon joints in a project like this one required the bulk of Monday to machine cut, hand cut, and hand fit but, the sides, doors, and face frames came together. 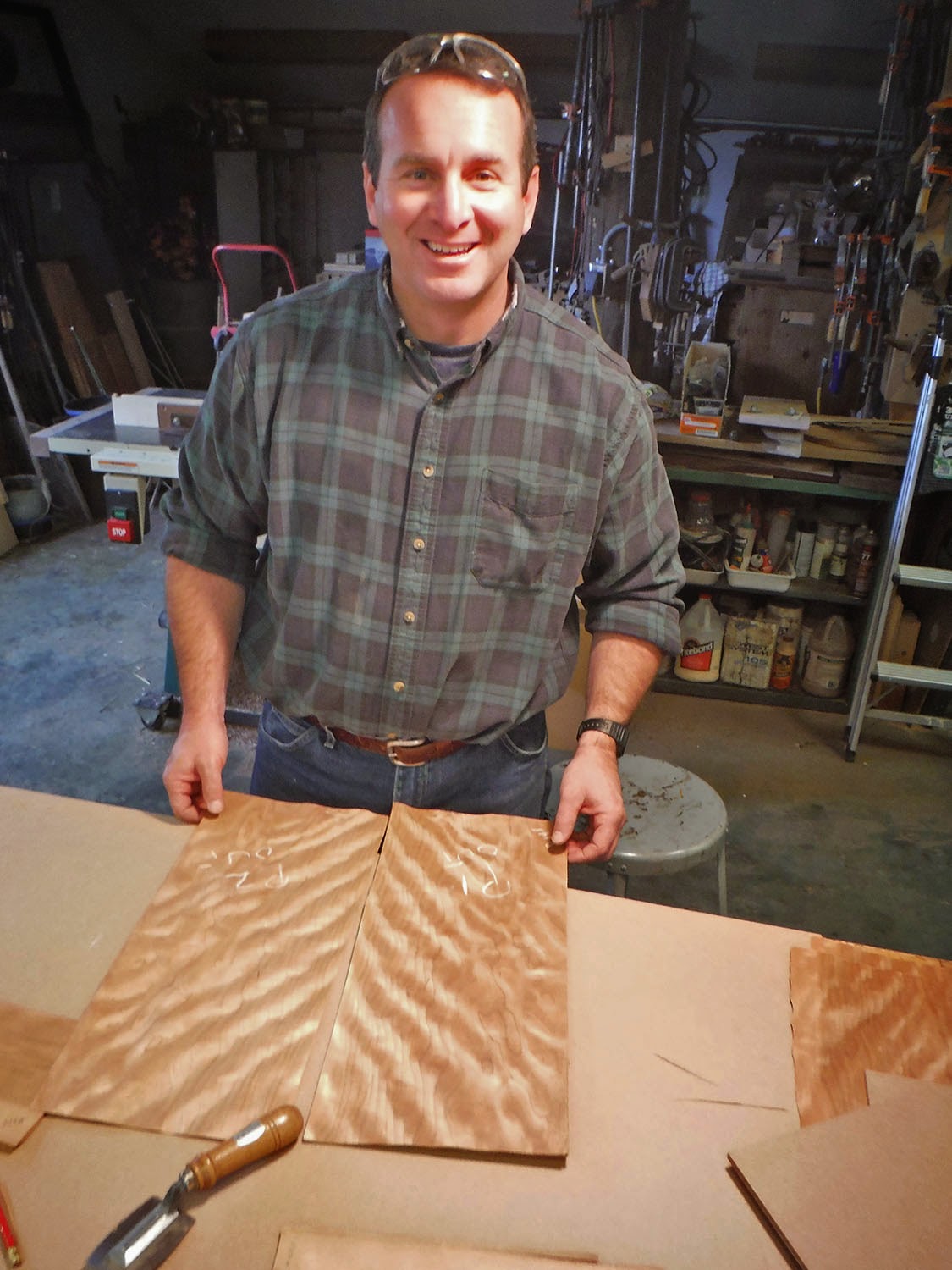 Next, it was onto playing with veneer! Starting with long sheets of highly figured cherry veneer, Jeff cut sets of rough lengths for each student to flip through, book match, and assign to their door, side, and back cabinet panels. The students quickly learned that keeping the stacks of veneer numbered and in order is key to achieving book matching perfection. The goal was to book match the veneer so it looked cohesive all the way around the cabinet while also using matching sets to glue to the inside and outside of each panel so that it appears as the same solid piece of wood through to the inside of the cabinet. Using their assembled door and side framework as guides, they chose which portions of the veneer sheets they wished to see on their panels. From there, they carefully measured, marked, and cut the veneer to fit the MDF substrates for each part. 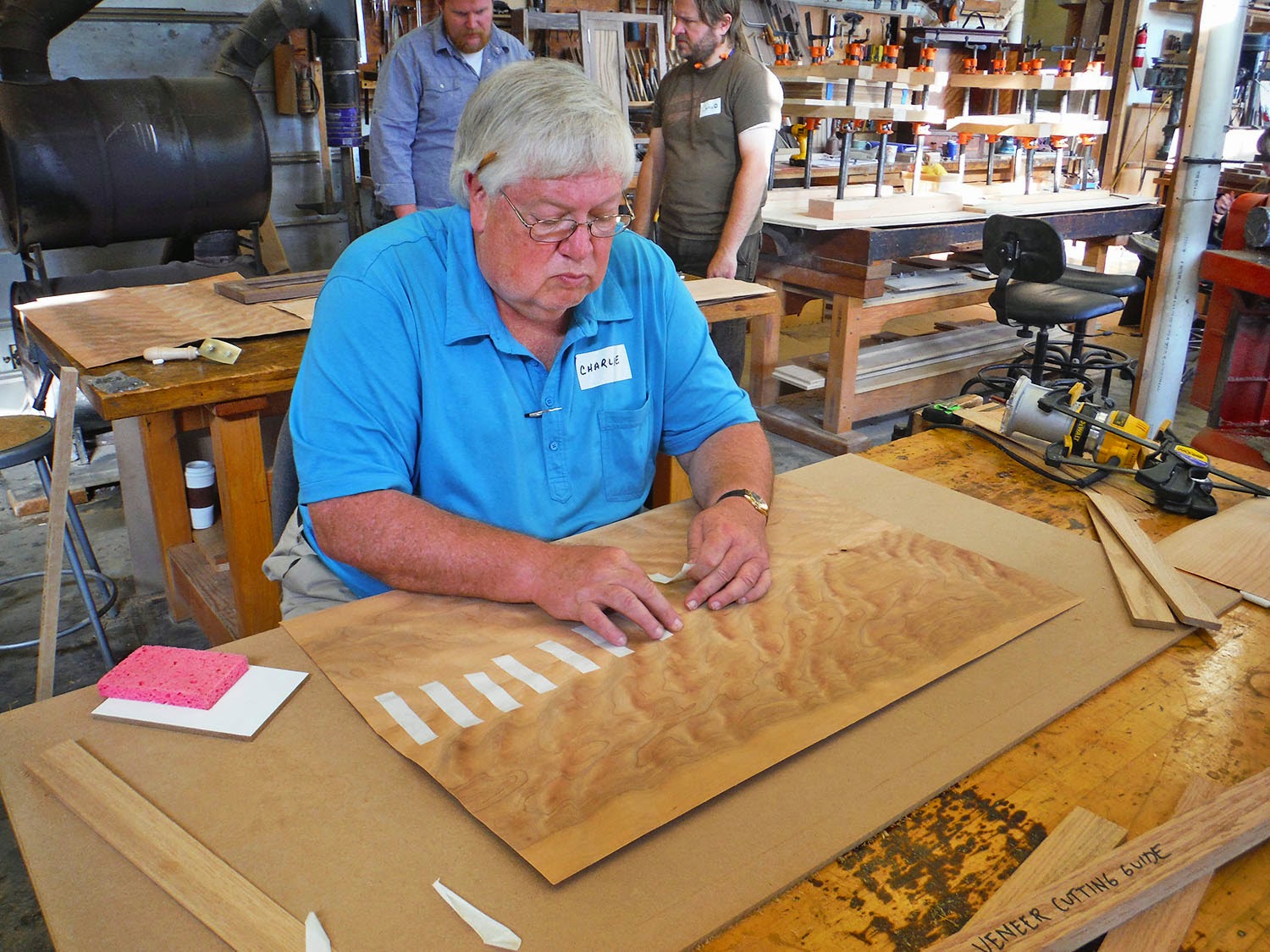 For the back panel, we needed to join two pieces of veneer together in order to cover it's entire width. To do this, we used a jig which clamped the two sheets of veneer stacked, flat, and tight with only 1/16" of their soon-to-be-joined edges protruding. With a trim router and a fluted pattern-cutting bit, students were able to cut a pair of smooth, straight edges that would create a perfect seam when they were glued to the substrate. When the edges were jointed, we broke out the veneer tape! The veneer pieces were held together tightly as short strips of damp veneer tape were applied like stitches down the length of the joint. The final step was adding one long length of tape down the entire seam to keep everything in place for glue up. 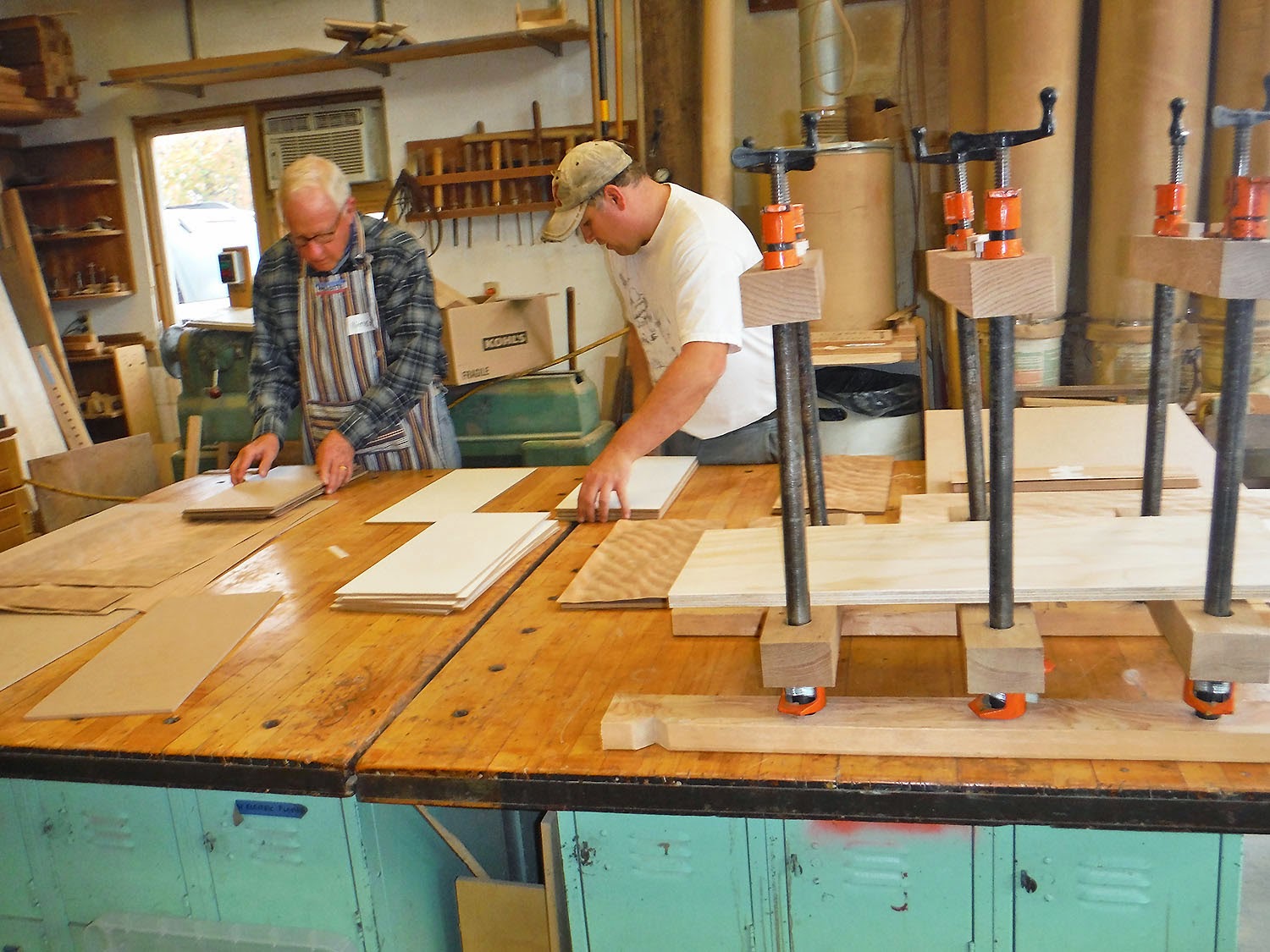 For gluing veneer, we use Titebond Veneer Glue and apply it with small foam rollers to ensure an even spread of glue over the surface of the substrate. One side of the 1/4" MDF substrate was coated with the veneer glue and then the veneer sheet was applied. The opposite side of the substrate was coated in glue, and then the other sheet of veneer for that panel was applied. In between each panel set (veneer-substrate-veneer), we placed a piece of lightly waxed melamine to keep the panels from being glued to one another. When each student's complete stack of door and side panel sets was glued up, they used painters tape in each corner to hold the entire bundle from shifting too much during it's move to the press. 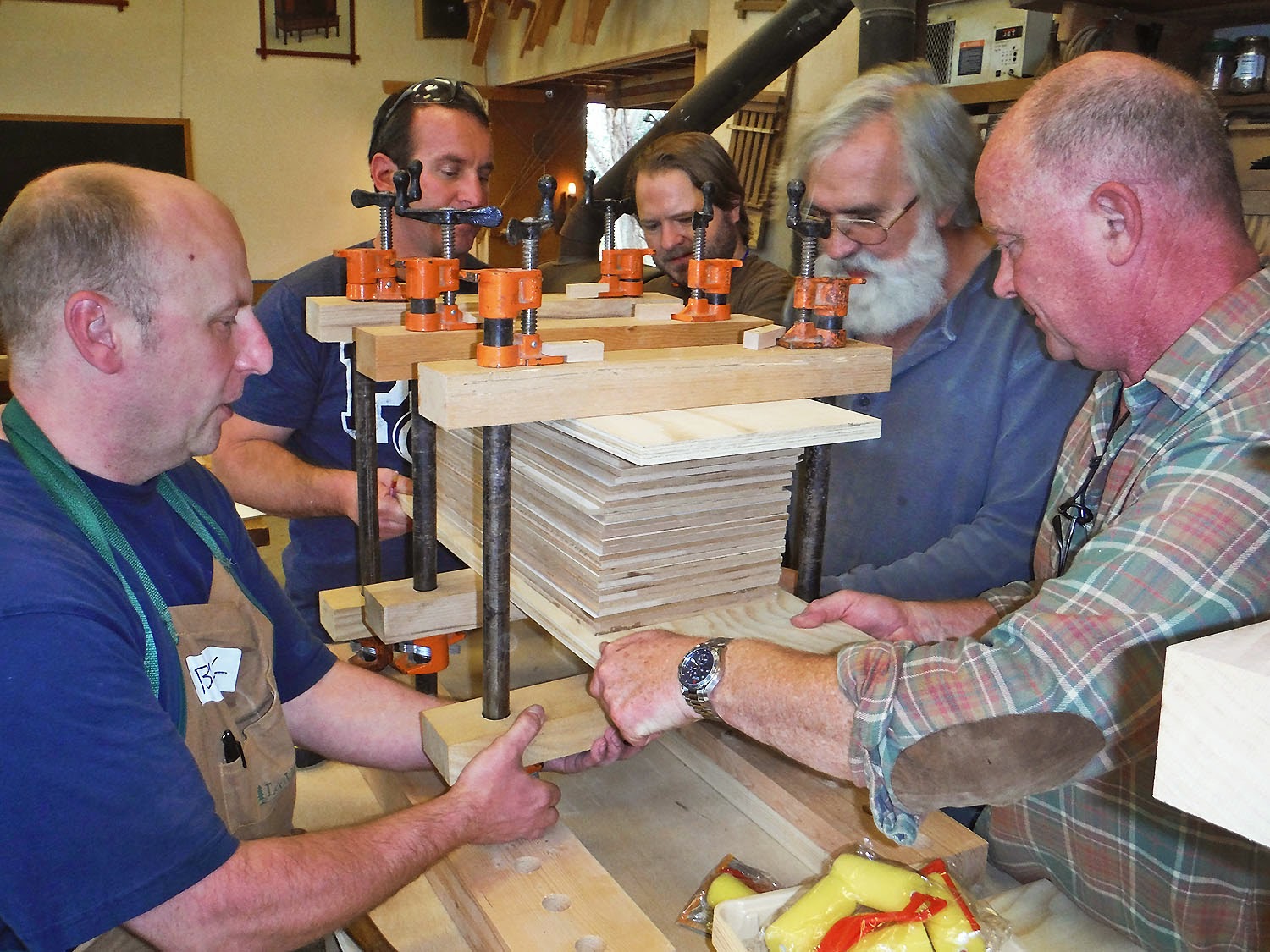 There is more than one way to press veneer and, as is the Lohr School of Woodworking way, we introduced students to more than one method. The first approach we took was bar clamp presses we had made here in the shop. We like this system because it can be recreated by students in their home shops relatively easily as it's just pairs of 3" thick hardwood boards with bar clamps slid through at either end. The clamps are held vertically while a piece of 3/4" plywood (bigger than the size of the panels we were gluing up) was placed between the hardwood clamping boards to create a platform. The stack of panel sets sits on the 3/4" plywood platform while another sheet of thick plywood is placed on top. These two pieces of heavy plywood serve as a caul to disperse the pressure of the clamping boards evenly across the entire surface(s) of the panel sets. By tightening the bar clamps, the top hardwood clamping boards lowered onto the stack and we were able to put immense pressure across the stack. 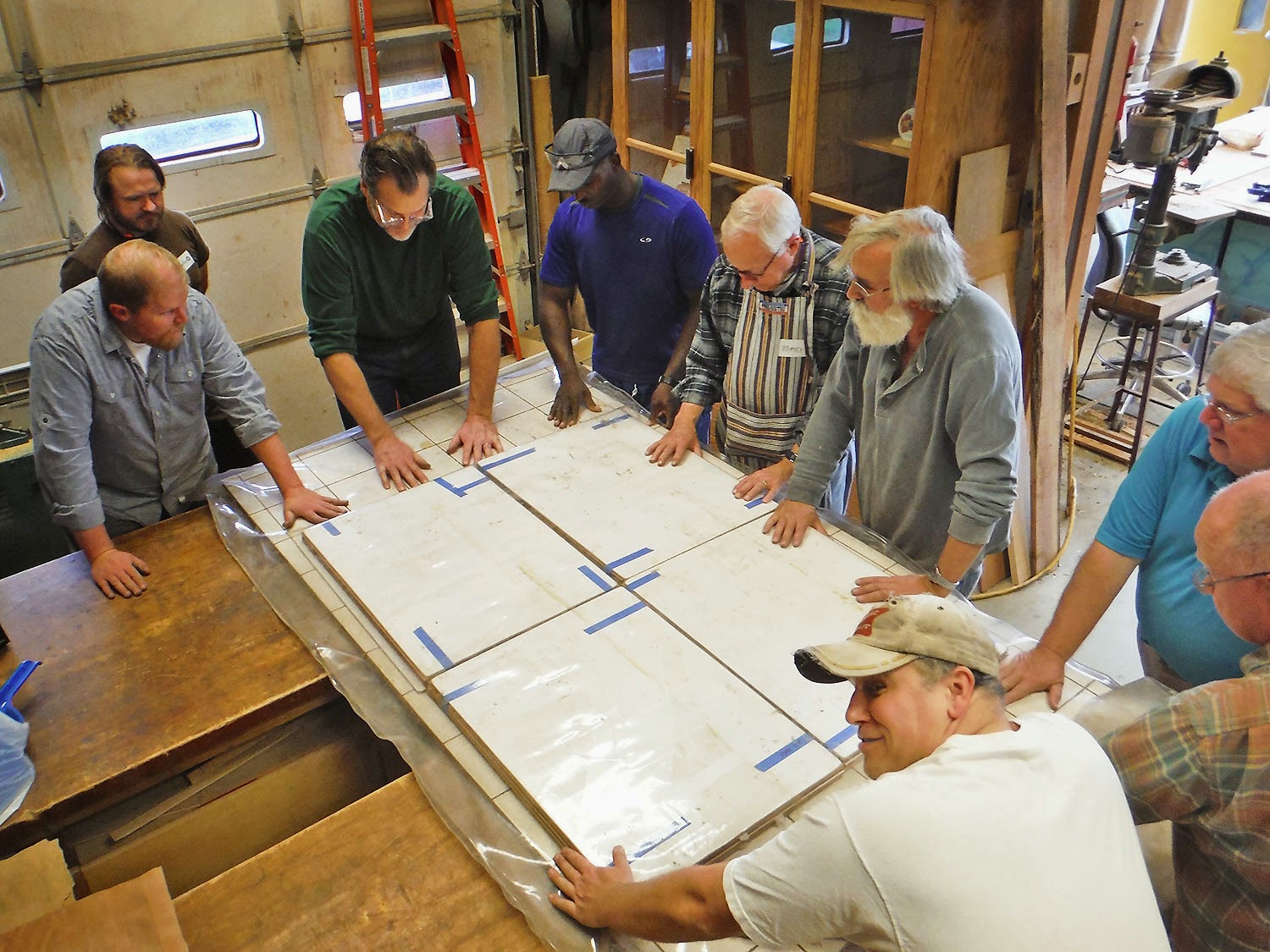 For the back panels, to ensure the veneer would be pressed flat across the larger substrate surfaces, we took to the vacuum press. As before, each panel set was separated with a lightly waxed melamine sheet (to prevent gluing unwanted things together) and the top melamine piece was sanded to have rounded edges. With a big, heavy, flat piece of melamine coated particle board underneath, the back panel sets were placed into the vacuum bag. The vacuum sucks out all of the atmospheric pressure and air from the bag thus pressing the veneer to the substrates with no chance of bubbles or bumps. Both veneer presses were left for an hour or two to let the glue tack and set before the pressure was removed. 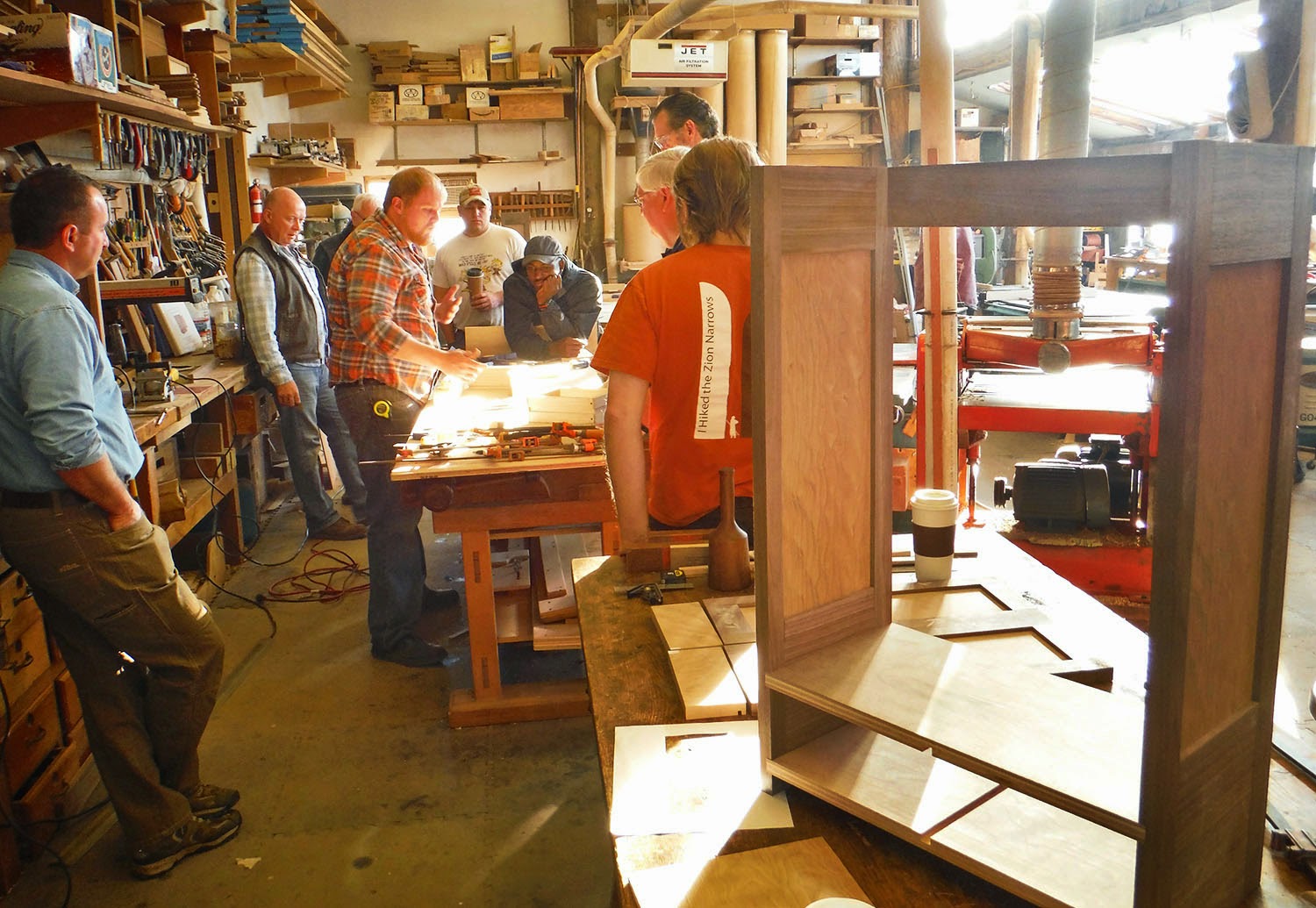 As the week pressed on (see what I did there? Veneer press, time pressing on... no, you're right, that was a bad one), we tackled some more joinery within the cabinet carcase and how to glue it all together. Then, we attached the face frame to the carcase with carefully planned biscuit placement. We mitered and glued some decorative molding for the top of the cabinet and used another set of jigs to make sawtooth shelf supports. The hard parts peaked again toward the end of the week when it was time to hang the doors. The students used their trim routers and some careful layout to cut hinge mortises into the face frame and door edges. When the mortises were successfully cut to fit their hinges perfectly, extreme care was taken to plan how they were to create an even reveal all the way around each door. In some cases, it was just a slight trim here and there using the table saw. In other cases, students took to the router to cut a clean, straight edge at an angle to make a top/bottom edge parallel to the face frame. And, just when they thought it was over, it was time to do the same for the drawers! The runners had to be carefully attached inside the cabinet to hang the drawers in such a way that the reveal around the edges of the drawer front was the same. This is the part when every woodworker smiles to themselves as they know how painstaking it is to tend to the finest, finishing touches of a project like this. Frustrating and time-consuming as it may be, it's the attention to detail that makes or breaks the cabinet you've been working on for 40 hours. 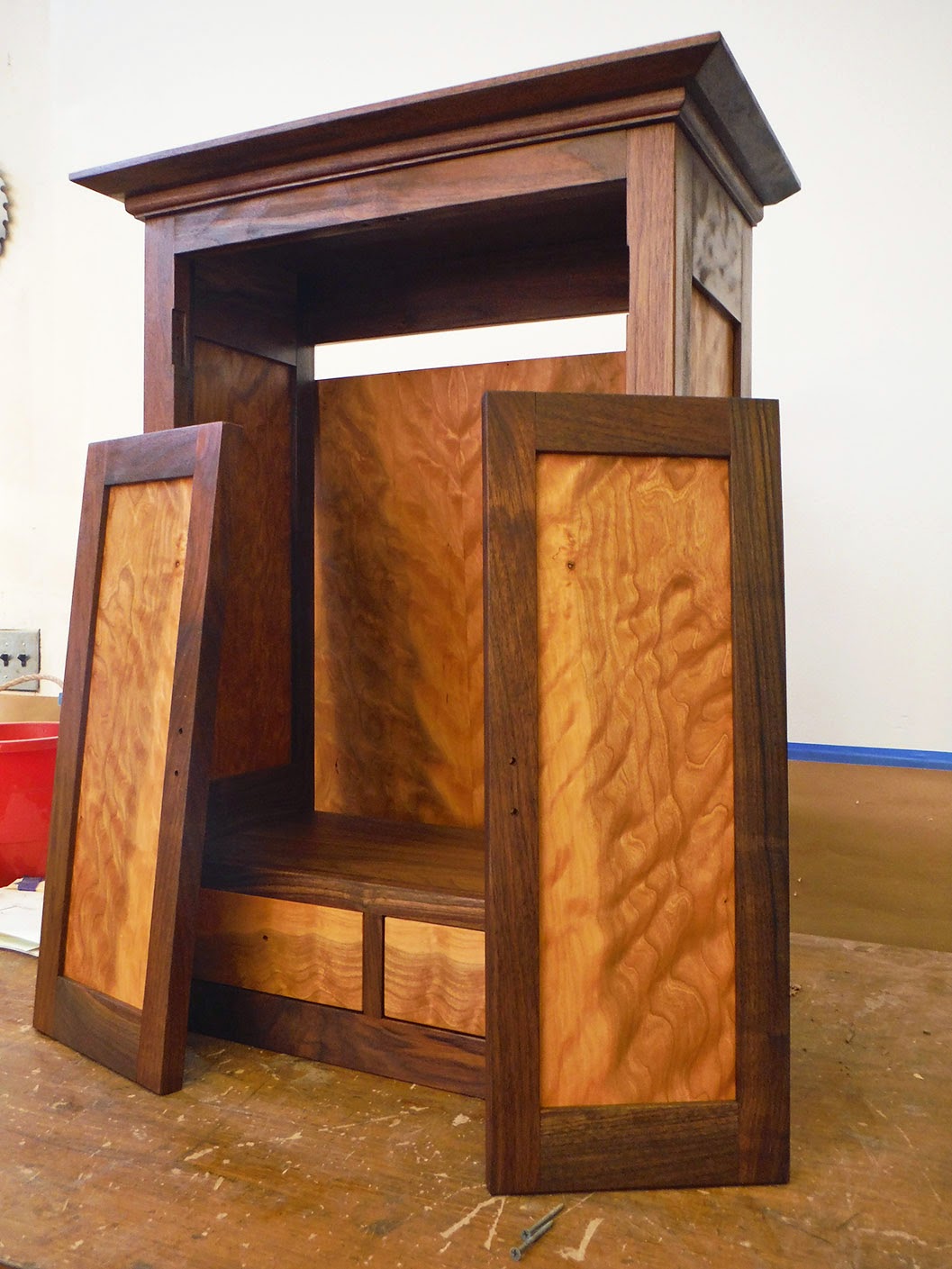 Good news for you, recent grads, Rob & I took the afternoon yesterday to finish up the last little details on our cabinet. Shaping the pulls, drilling their clearance holes, cleaning up the sawtooth shelf supports, drilling the holes for the bullet catches, attaching the top molding, sanding everything down once more, breaking all edges, and applying the boiled linseed oil only took us around 3 hours to do. So, fear not, we are living proof that you can finish it up in little time! Take a few hours, crank some tunes, break out the course guide, and finish up your seriously stunningly-figured cabinet if for no other reason than so you can brag to your friends and impress your family.

After six long, busy days, all eight gentlemen had a nearly-complete veneer wall cabinet sitting proudly upon their bench. Pat yourselves on the back, men, you did a phenomenal job! We were, and continue to be, thoroughly impressed by your ability to keep up with the pace, face any challenges that arose, catch on to techniques, and persevere with laughs and smiles. And now, we're preparing to welcome our very last class of the year- Advanced Joinery 201 folks, we're gettin' ready for ya'!
Posted by Unknown at 3:02 PM No comments: