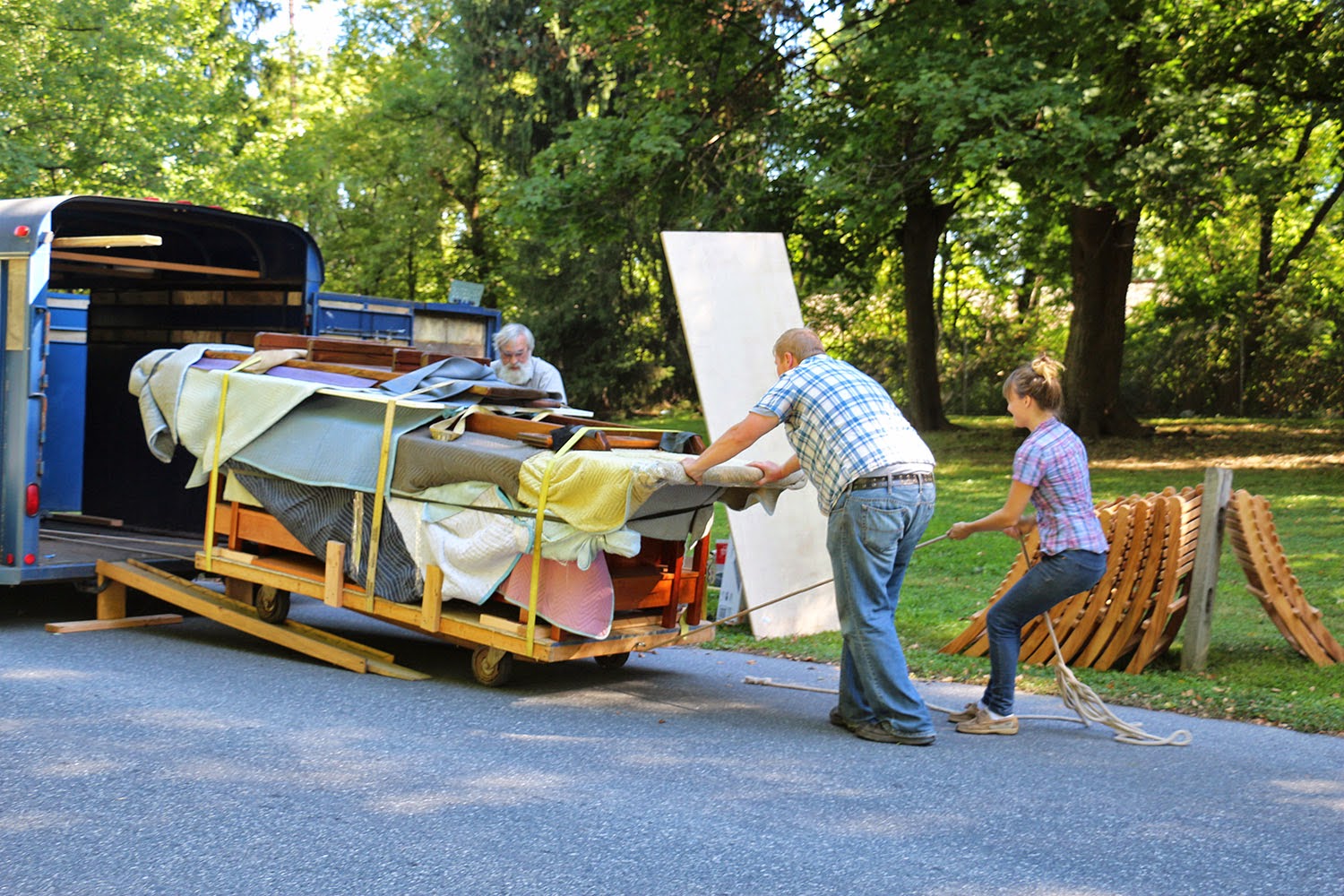 Fun was had by all at Long's Park this year... until a monsoon rolled in... but, I'll get to that part later.

As makers of large and heavy things, we had to arrive bright and early on Thursday morning to ensure we could get everything assembled and ready for Friday's show open. First things first, remove the giant cart of furniture from the horse trailer. Again, with the aid of a block-and-tackle and some ramps, we wheeled that sucker out with relative ease. Lucky for us, the weather was perfection for move-in day. We set up over 30 pieces of our furniture in our booth, enjoyed a nice packed lunch on one of our new desks, detailed the pieces, lit everything, and were on our way before the sun set. Yes, that includes the moving and set up of the 11'6" long live edge brown oak table and our just-finished live edge walnut desks. 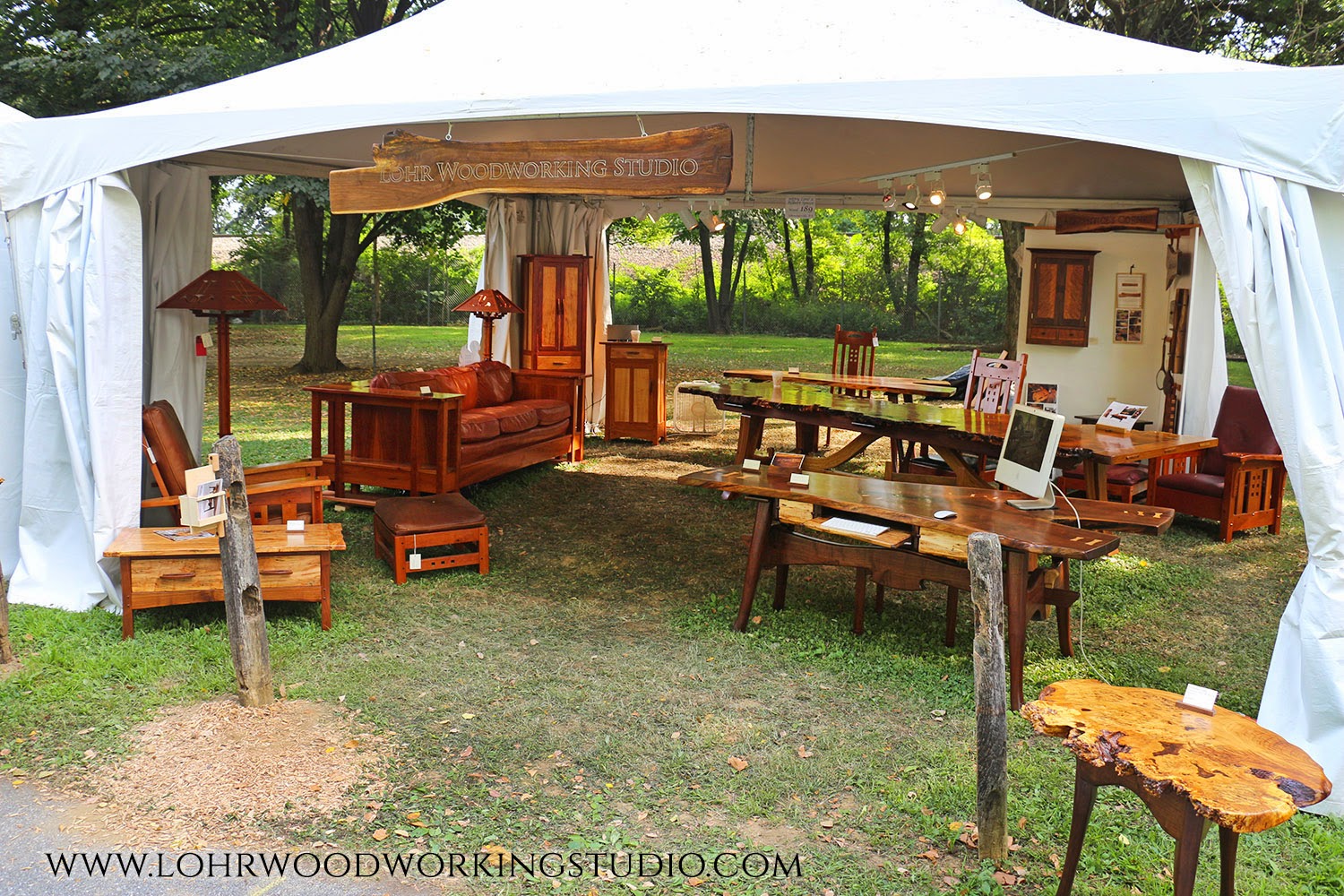 The park opened it's metaphorical doors at 10am on Friday and the Lohr Woodworking Studio team was ready for visitors! I was particularly excited (and nervous) because it was my first-ever show. What I learned? People are so nice! Seriously, if you want to talk to really pleasant, interested, and happy people, go to the Long's Park Art & Craft Festival because that seems to be where they all are- both visitors and exhibitors. With a steady flow of foot traffic through the show and our tent all weekend, I got the chance to meet and talk with so many wonderful people. Everyone wanted to know about the materials, the designs, and process that goes into making our pieces and we were all more than happy to tell them all about it. It was fantastic! 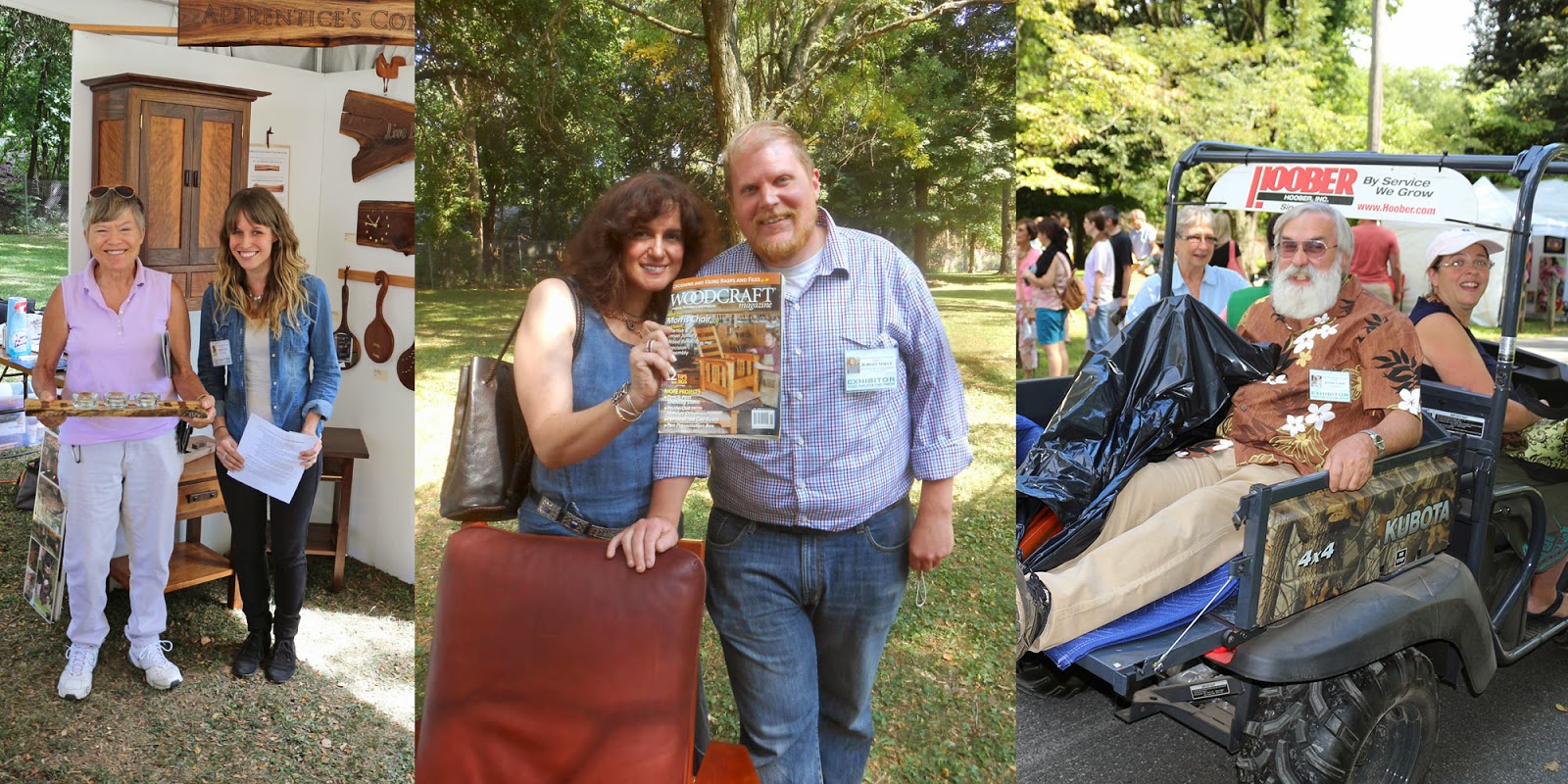 What makes any show even more fantastic is finding those people in the world that love something you've made so much that they want to take it home to keep as their own. I was the first to make a sale and, beyond being completely surprised, I was flattered and appreciative that Sandy couldn't imagine her new mantle without my live edge maple candle holder atop it! So, Friday marked a landmark moment in my woodworking career- confirmation that people like the things I can make enough to buy them; I'm still smiling, two weeks later! Jackie came to Long's Park to find Rob specifically after seeing his article in Woodcraft Magazine. She and her husband are now the proud owners of a mini Lohr Woodworking Studio collection of their own including two Morris chairs, an accessory table, and one of my cherry hand mirrors. Elaine couldn't leave the show without one of Jeff's last remaining floor lamps (likely never to be made again). Above and beyond all that, we were proud to sell out of our easy-storing red oak deck chairs! What a show, what a show! 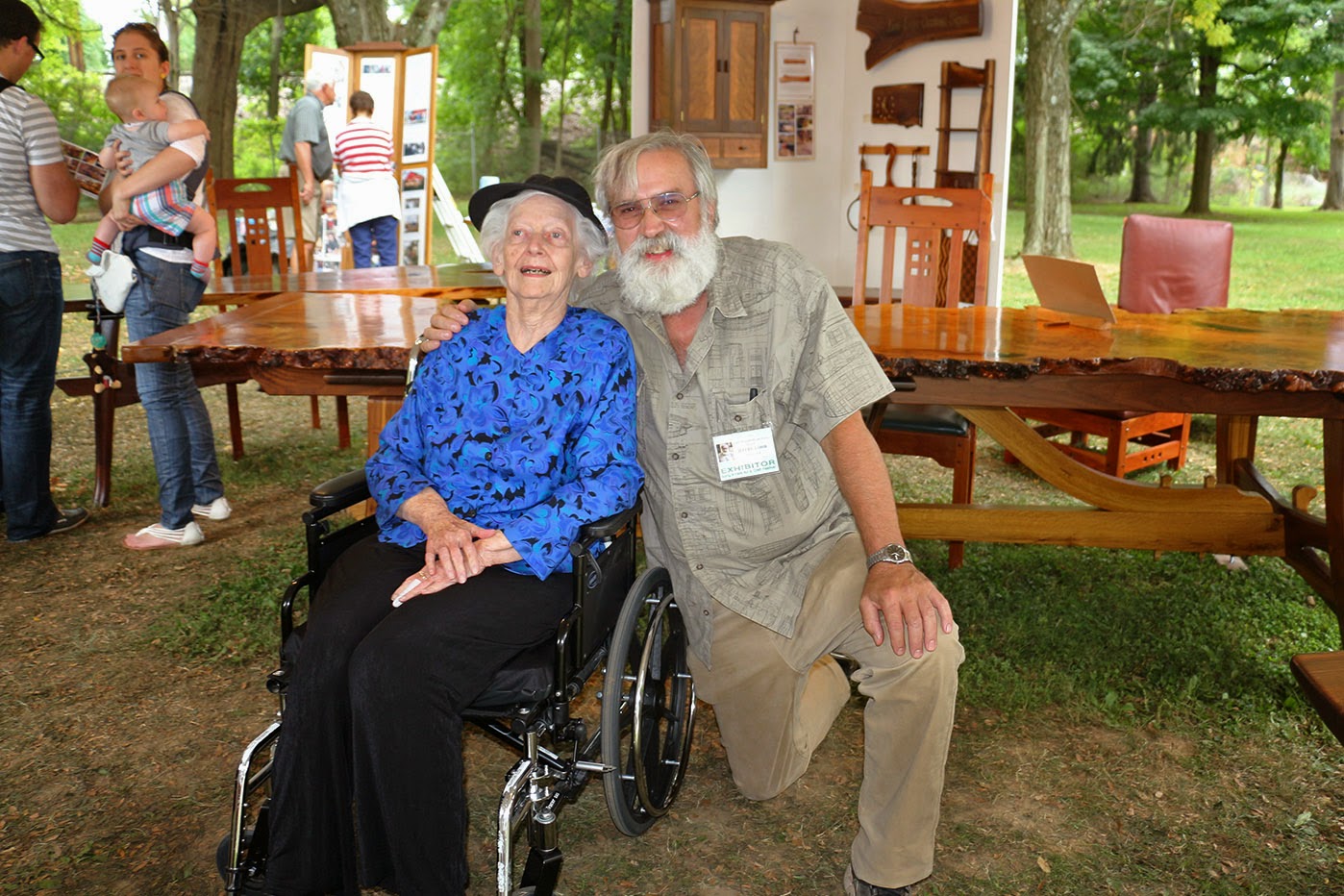 One of the major highlights of this year's Long's Park Art & Craft Festival was getting to meet Marion Faulkner. Marion's husband, Dick Faulkner, founded the Long's Park show in 1979 and their son Rick went on to serve as co-director with his father. He built the show from the group up and it now continuously reigns as one of the top fine art & craft shows in America. Despite the difficult terrain, she came into our booth and posed for a photo with Jeff. It's thanks to the Faulkner family that artists from across the nation are able to share their art every Labor Day weekend at Long's Park so we considered it an honor to have the chance to meet her! 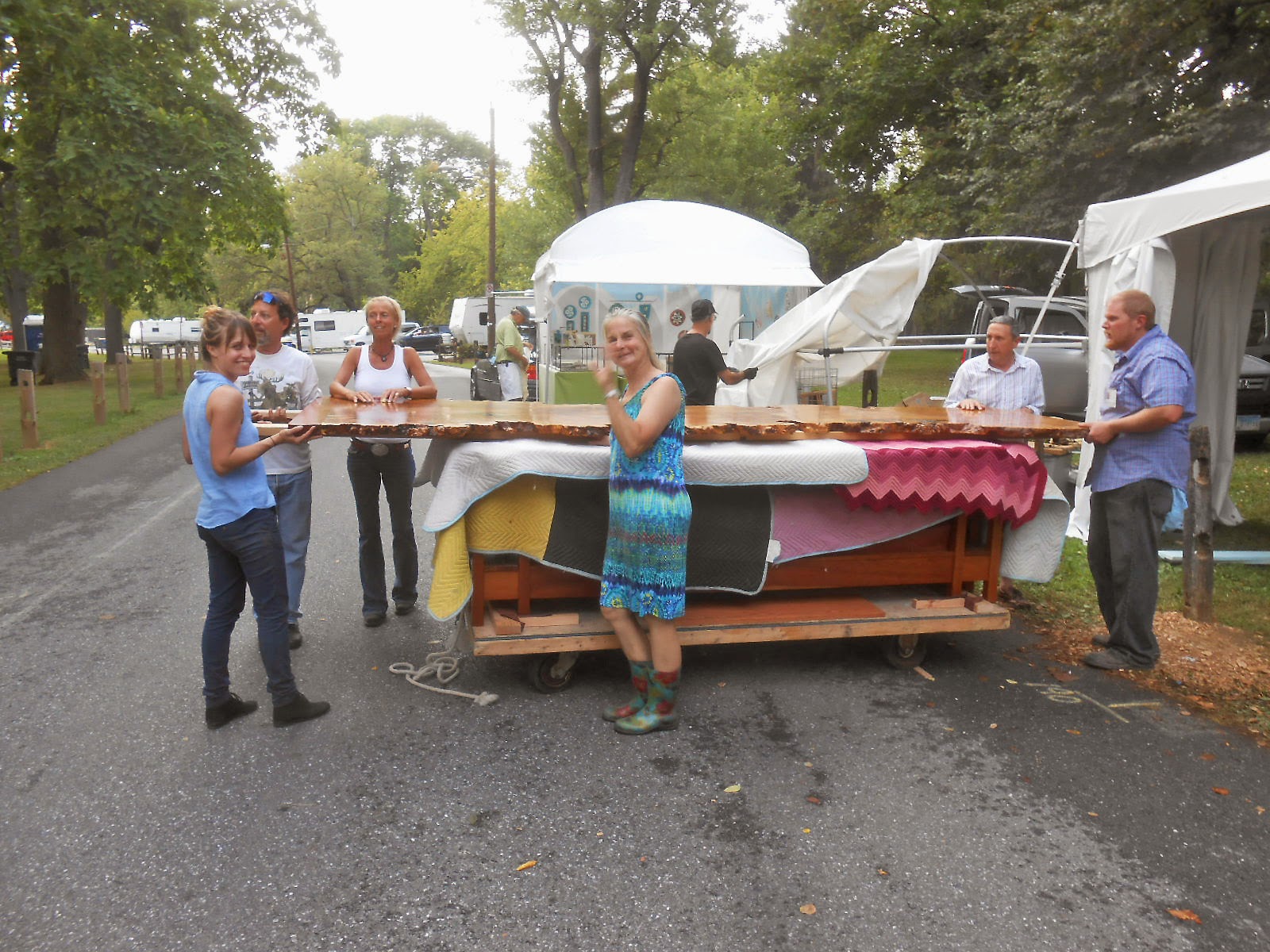 After a long and enjoyable three days of perusing all kinds of art, talking with all sorts of people and artists, and showing and selling our furniture, it was time to pack it in and head back to Schwenksville. Out came the cart and the horse trailer, and in came roughly 50 packing blankets. With the threat of 'severe thunderstorms' lingering all day, Jeff & Linda brought in reinforcements to make the move-out happen as quickly as possible. With Jeff, Linda, Rob, myself, John, Paula, and Steve, 5 vehicles, and some celebratory beers, we got everything done in record time. It was all smooth sailing, the cart was in the trailer, we were breaking out the sheets of plastic to protect what we could inside of it from the threat of rain... and then the sky opened up. Smooth sailing quickly turned into a scramble to get anything left out into the trailer, drape some sort of plastic over the heap of furniture, and get the door closed before everything was soaked. Everything still got pretty wet but, thankfully, I think we got more soaked than the furniture. It was really the above-and-beyond efforts of Jeff and Linda pulling everything out into the shop to air dry the following day that ultimately saved the finish. 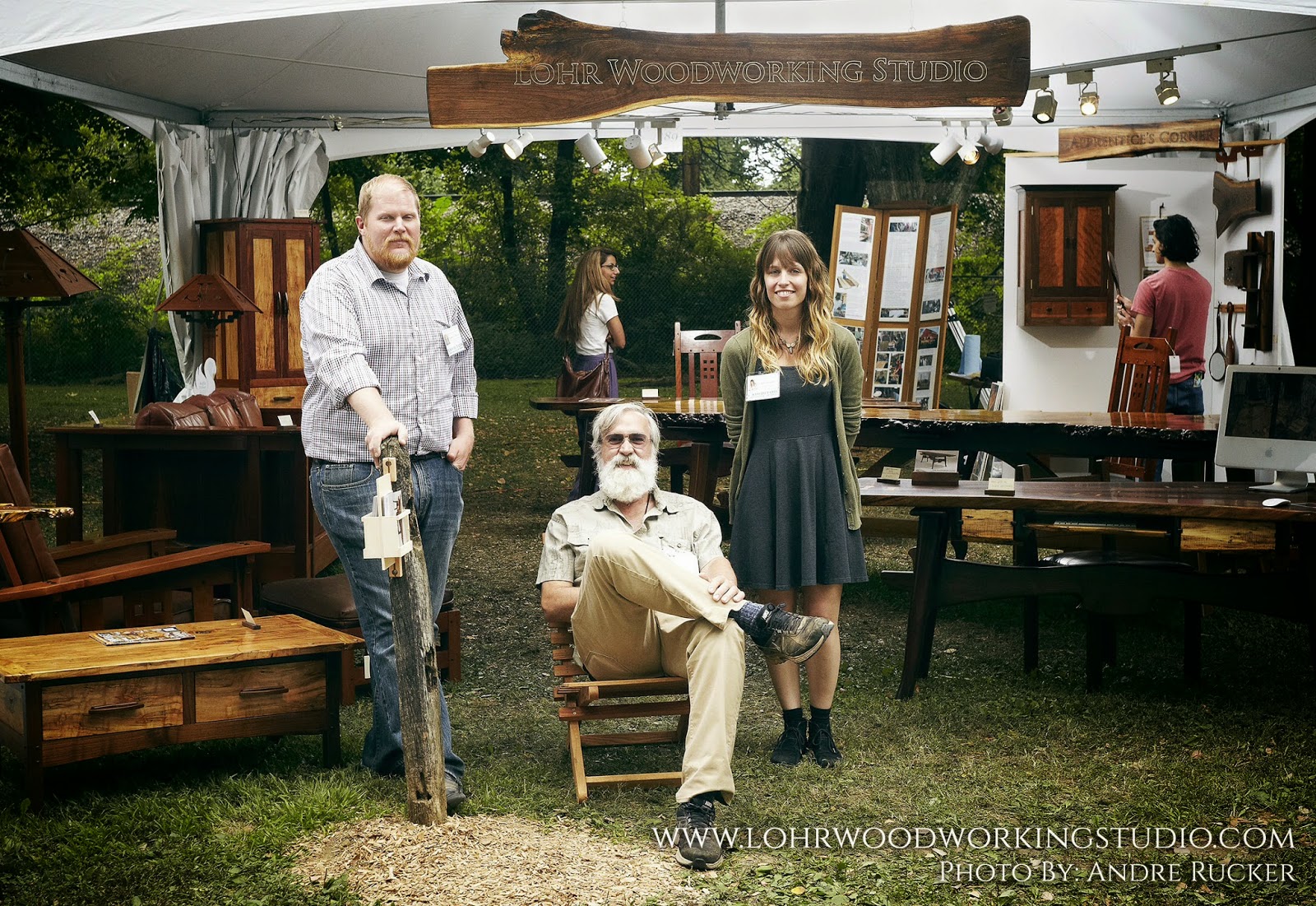 Now, we welcome the fall season and all the excitement, classes, and furniture-making it will bring!
Posted by Unknown at 11:44 AM 1 comment: