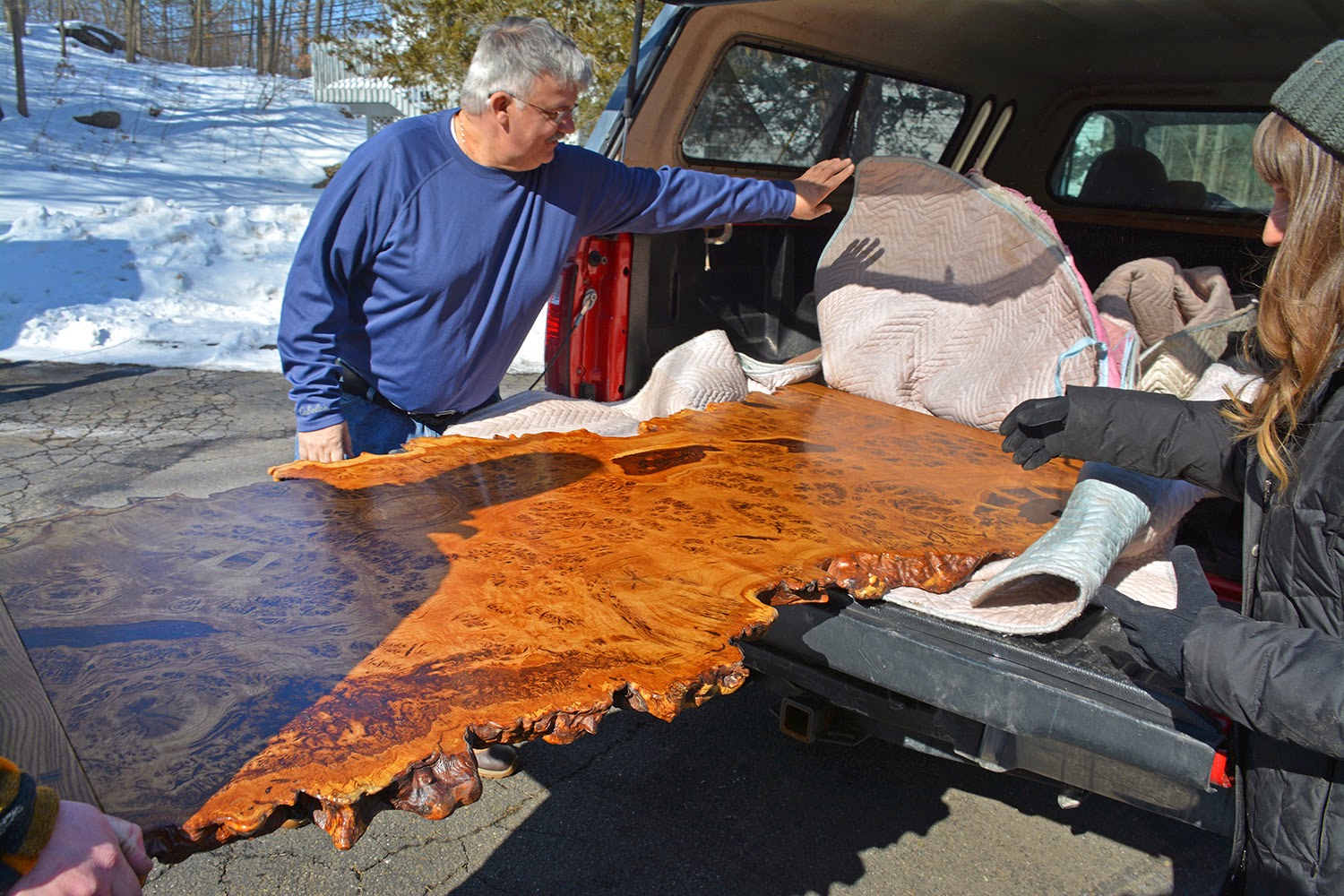 "Griffin", the recently finished live edge English oak burl dining table, has been signed, sealed, and delivered to the Pirro family. We have photo-guru, Chris, to thank for the documentation of the day- including all the photos you see in this blog entry! 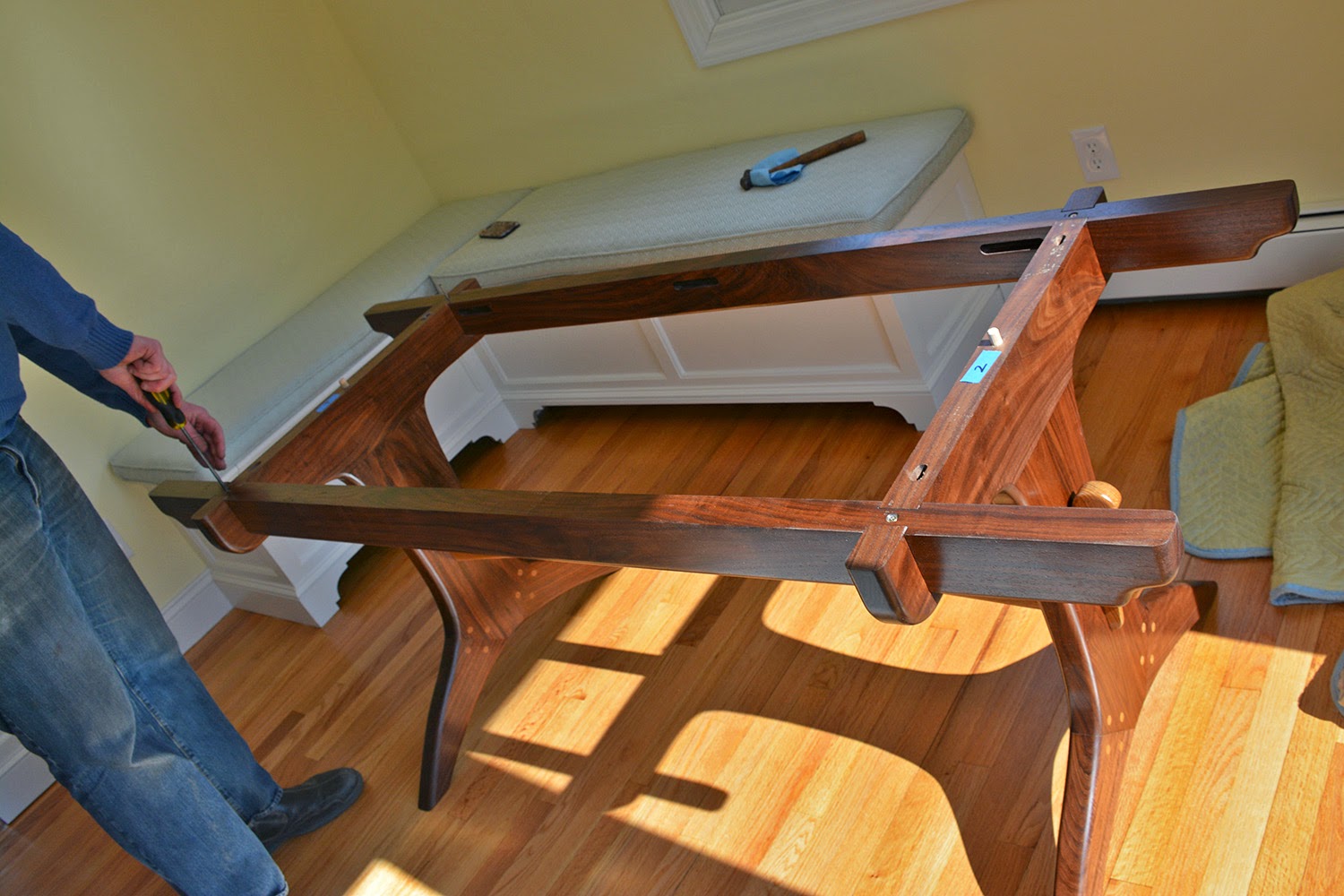 Because we make most things with a knock-down construction, it was quick and easy to break apart the base into it's five basic pieces, wrap 'em up in moving blankets and load them into our big red truck. The table top is, of course, one continuous slab, so it was wrapped up as one big piece. We loaded up the rest of the necessary toolage and several layers of extra clothing to keep frostbite at bay in the subzero temperatures that have been kind enough to grace our region with their presence. And, early Friday morning, Rob & I took to the road and spent some quality time with I-95 as we made our way from PA to CT.

Upon arrival, the first task was to get the base together. This walnut and white oak trestle base is a a quick assembly job; The trestle is pinned with two wedges at either end and the two stretchers drop into their (pre-fit and labeled) notches and are held in place with a single screw at each joint. As you can see, there is a dowel coming up from the top of either end of the base. The table top has holes drilled into the under side that fit the dowels to automatically center the top on the base. 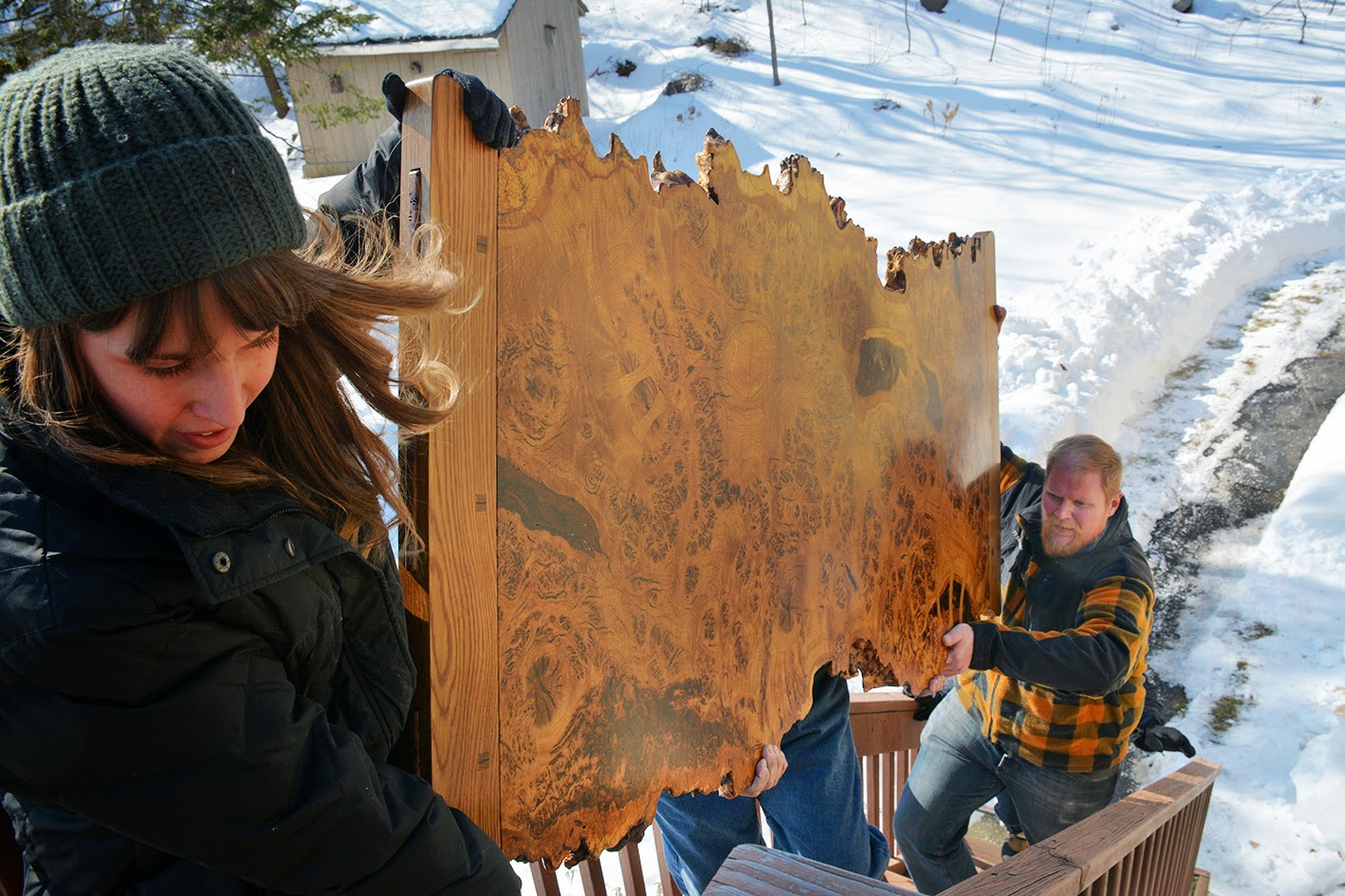 After there was an assembled base to hold it, we unloaded the table top slab. Before we arrived, Mr. Pirro had been so kind as to shovel and salt us a clear path to make the big haul around the house much less precarious. For those of you that live in the north east, you'll know I'm not exaggerating when I say that this winter has been no joke. There was a good foot of snow on the ground to accompany the -12 degree windchill for this move-in so we were especially grateful for a slip-less path. With Rob, Mr. Pirro, and myself, we were able to tote the table top from the truck, around the house, up the stairs, and into the dining area with relative ease. 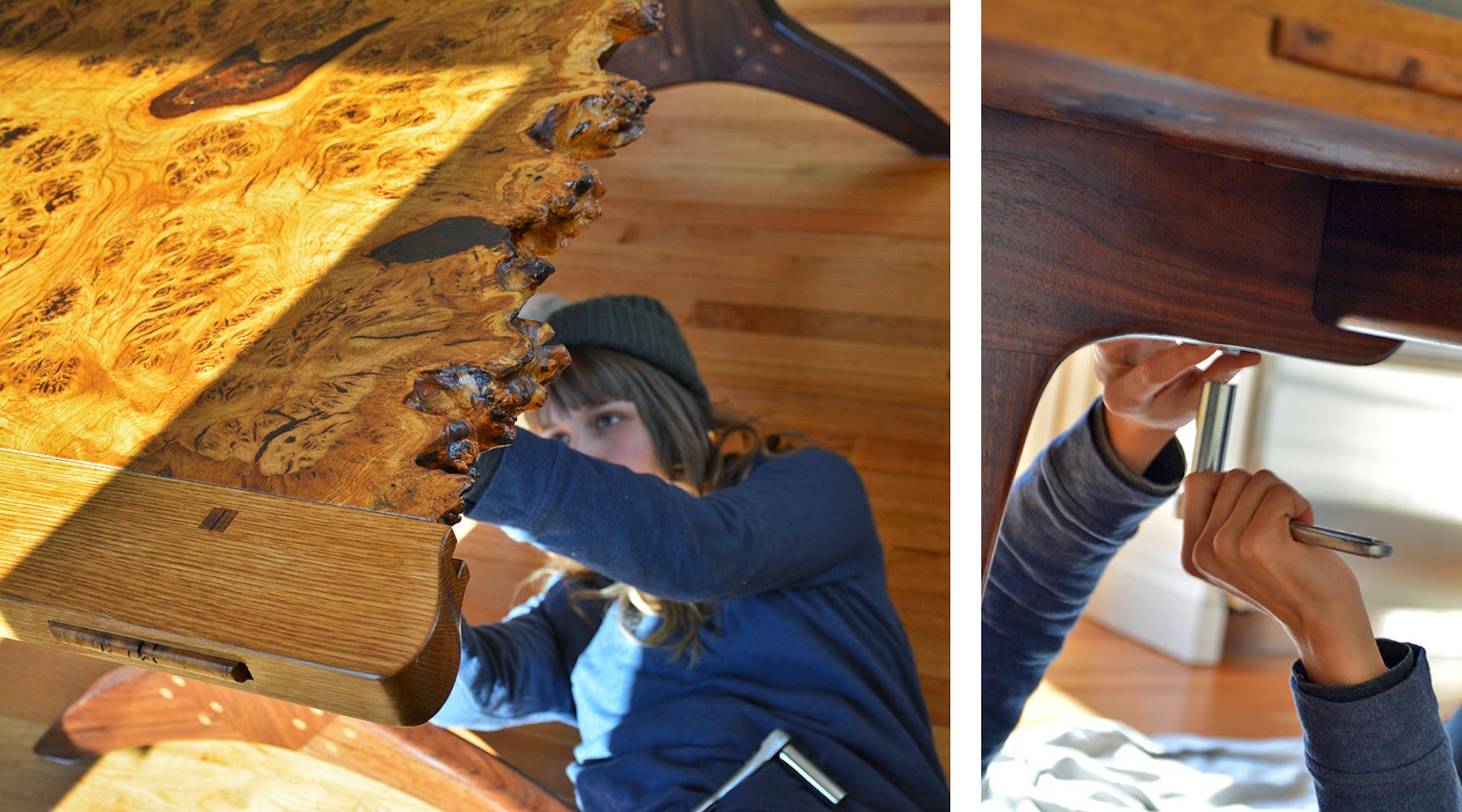 When the top was lowered and found it's place onto the dowels (therefore centered) on the base, I broke out the 3/8" bolts to pull the tabletop tightly to the base ends. Each end of the base has two elongated clearance slots drilled through it to allow the bolt to move back and forth with the tabletop and prevent any splitting of the slab as the temperature and humidity changes throughout the year. To keep the table top snug against the top of the stretches, we used six large hold downs. There were six slots cut into the inside face of the stretchers longer than the width of the hold downs themselves, again to allow movement. The hold downs were hooked into the slots and bolted into the table top with 5/16" bolts. 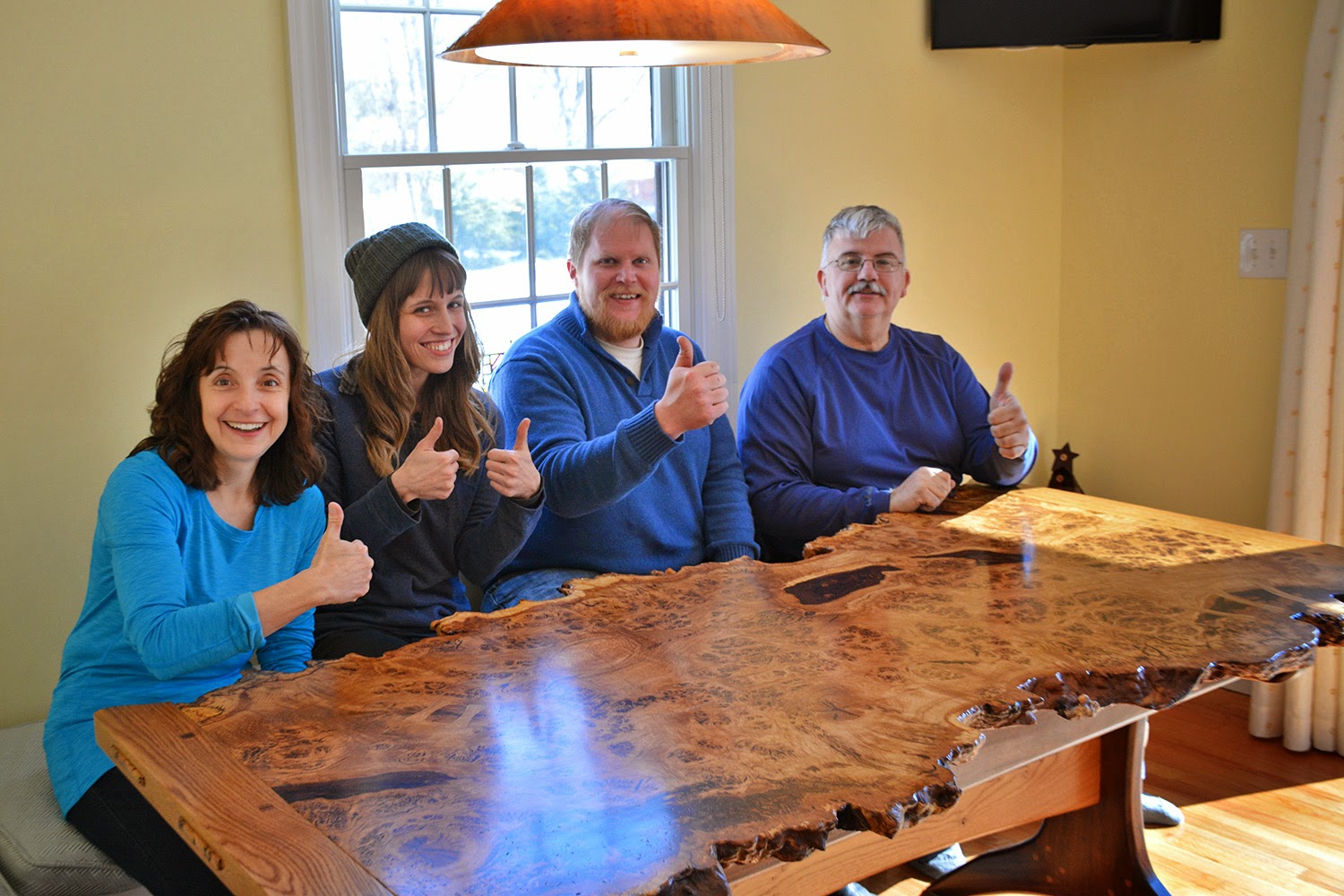 And, with that, the Pirro's are ready to wine and dine on the live edge English brown oak dining room table made just for them! Rob & I were honored to be invited to be the first to christen the table as we feasted on some delicious "grinders" (which in PA we know as "hoagies" and in FL we know as "subs").

A huge thank you to the Pirros again for giving us the opportunity to make "Griffin" and for making the delivery day warm, easy, and happy! An additional thank you to Chris for snapping so many great moments throughout the afternoon and letting me steal a few to include in this post.