A new Lohr Woodworking live edge table is in the works! 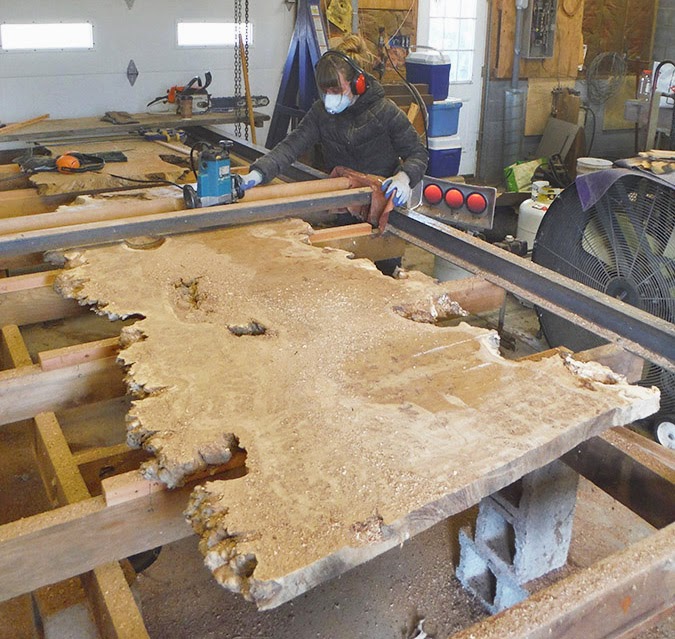 There's another all-new, all-original Lohr Woodworking live edge table in the works, kids, get excited! The Pirro family needs a dining room table and we're hard at work to make that "need" into a "have". This dining table will be the very last to be made from the famous 300 year old English brown oak burl log that resulted in the "Frontier" and "Resurrection" dining tables. 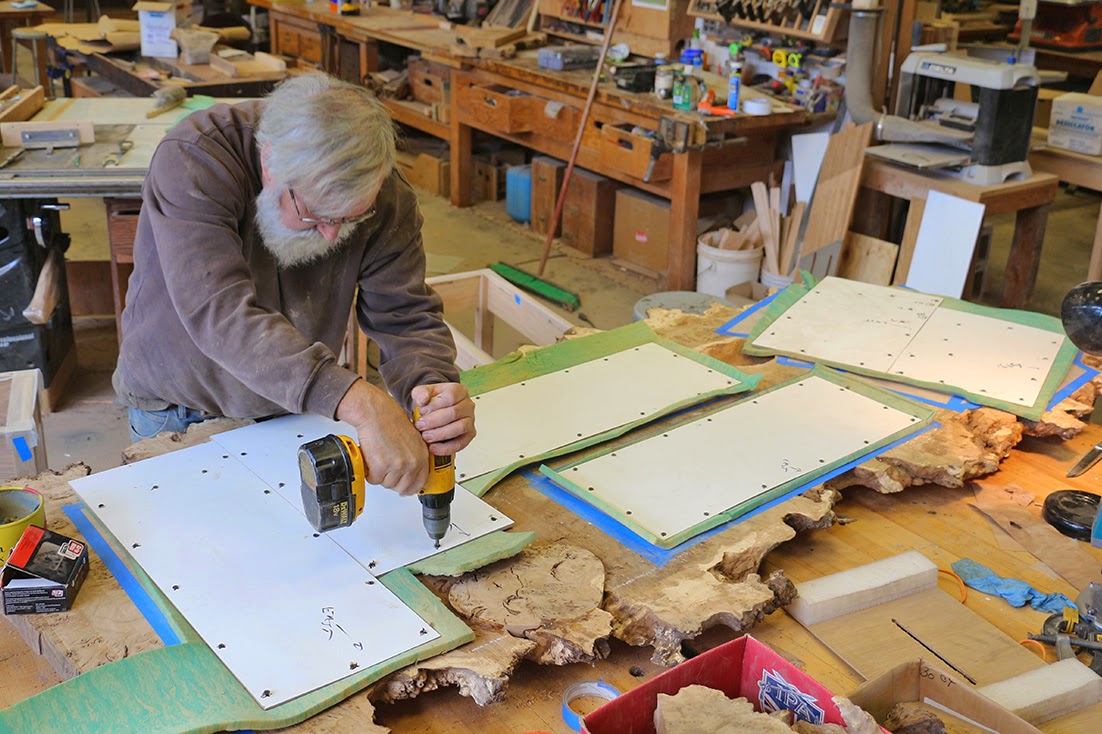 First things first, we used a router loaded with a bottoming bit and our massive router sled to level and smooth both faces of the slab. When the slab was milled, we brought it up to the shop where it was prepped for void repair. The log that this slab was cut from was covered in burl clusters from top to bottom. Because of this, the grain is highly figured, colorful, and beautiful to look at. The downfall? The slab is completely filled with natural voids, splits, and knots.


In many cases, we would opt to leave the natural flaws as they are (much like George Nakashima) however, in this case, as it will be used as a dining room table, the voids need to be filled for ease of cleaning and to provide a consistently smooth surface. To prevent the epoxy mixtures from draining through the voids, Jeff created a setup that seals the holes from the bottom- it's plastic, carpet padding, and melamine stacks that are screwed to the underside of the slab to create a damming system that conforms to the voids. We can then flip the slab over and fill the voids from the top side while the damming pieces allow the epoxy to pool and fill the spaces until it has time to dry. 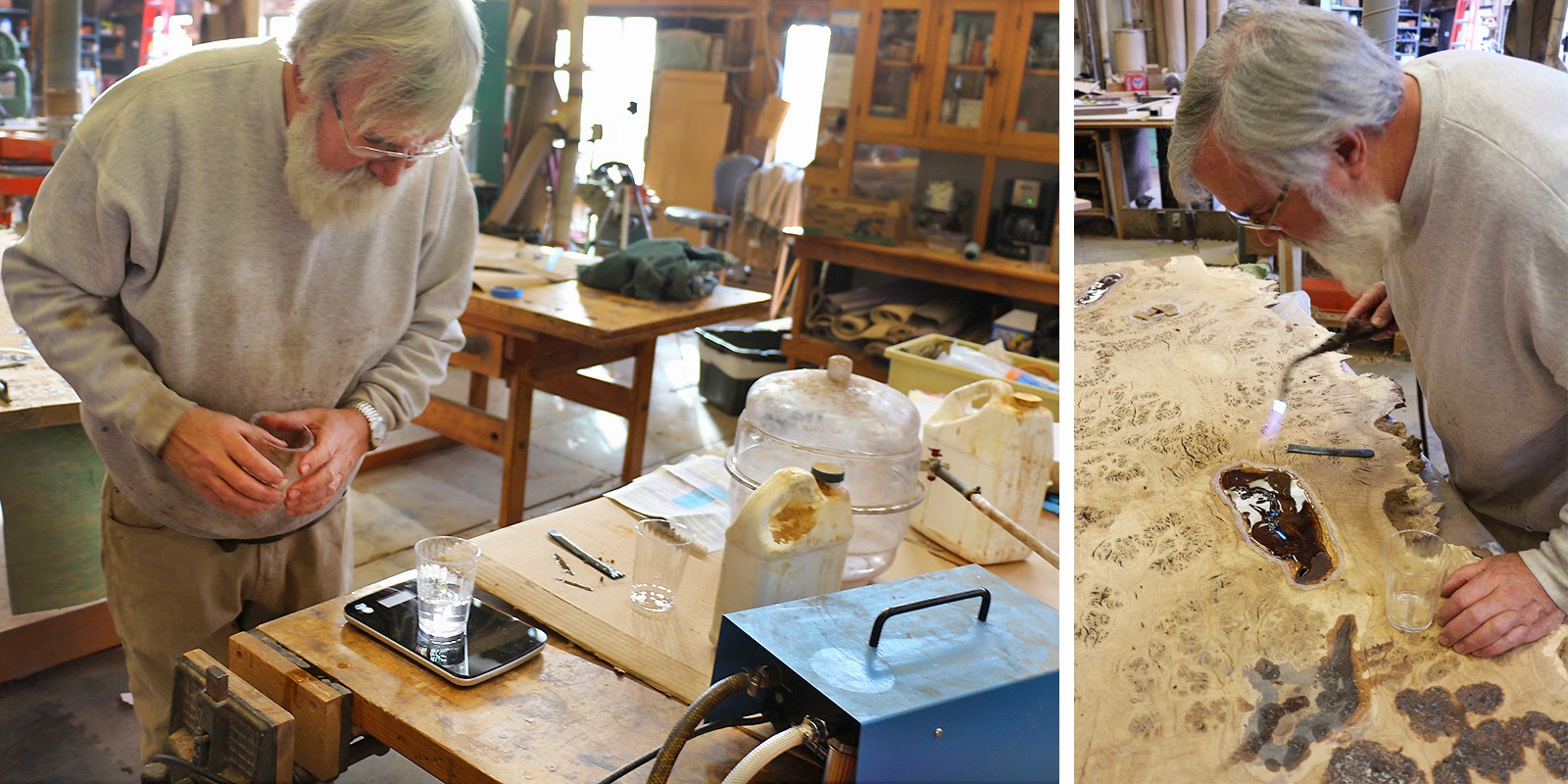 This highly figured slab was not your average epoxy void repair job. The size of each void/split/knot and its location with respect to the edges of the slab, determined which kind of epoxy and filler we chose to use. 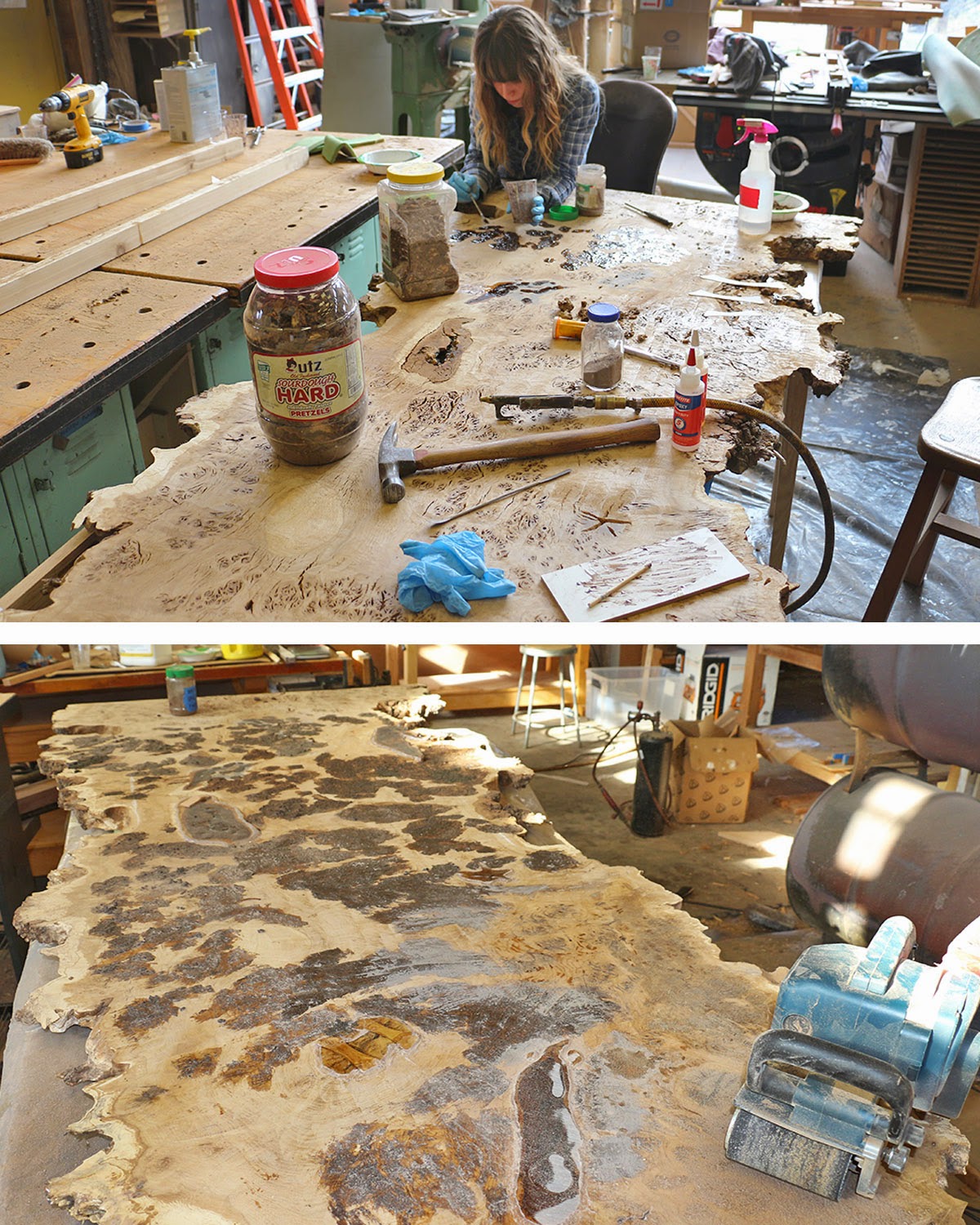 For the larger bark inclusions and knots, we used some serious chemistry skills (with massive aid from the ever-genius Linda Lohr) to mix up clear EpoxAcast 690 casting epoxy so that the natural bark can be seen through the filled void. The casting dries completely clear and maintains somewhat of a flexible property that allows it to move with the wood as it expands and contracts with changing humidity. Mixing the casting epoxy required some careful weighing, a desiccator vacuum chamber (to remove bubbles before pouring), and a blow torch to rupture any bubbles that collect on the top of the poured casting.

The clusters of smaller splits and voids were filled with a West System epoxy, sawdust, and crushed bark mixture. The sawdust and bark were taken from along the live edges of this slab so the color would remain a natural match. Each batch of epoxy mixture has about 7-12 minutes of open time so to ensure each individual void was filled, one batch was mixed to fill one cluster at a time. For larger voids, we would search for a piece of the natural bark from the same tree to fill the space as best as possible.

Needless to say, filling the voids that covered the entirety of the table top took about a week. When all the voids were filled, whether it was epoxy-and-sawdust or EpoxAcast, it was left to dry for 24 hours. After the damming materials were removed from the bottom of the slab, both faces were smoothed with a belt sander. As you can see from the photo to the left, the filled voids are brought to life and add an exciting element of contrast when they are filled with the natural bark pieces. The base will be made of walnut so the colors match perfectly throughout the entire table. 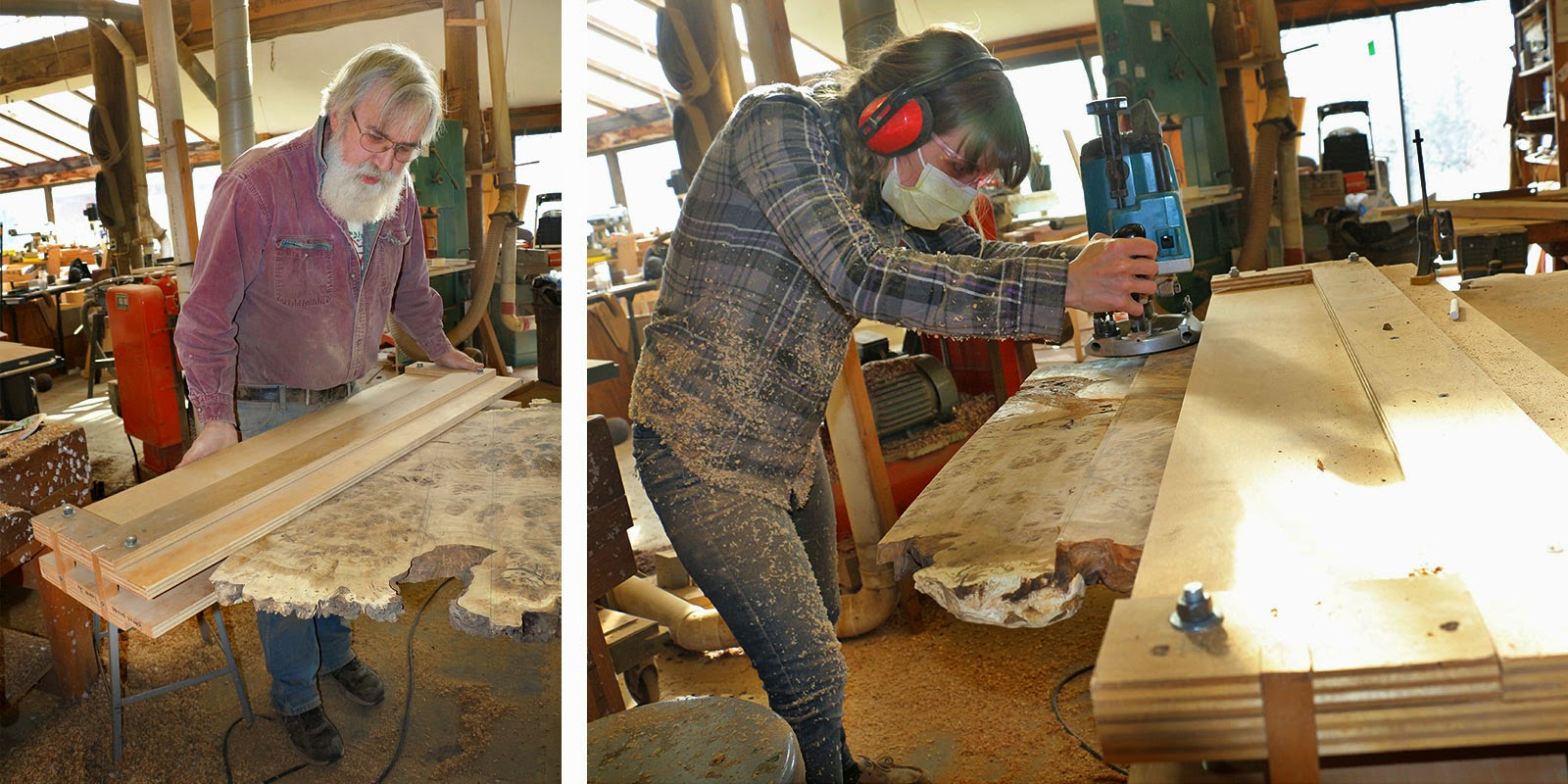 Now, how to keep such a long, continuous slab from warping and cupping as the humidity levels change throughout the year. The table will be attached to the base which will offer a certain degree of stability but, to ensure the table top stays flat for all time, we will add some breadboard ends. 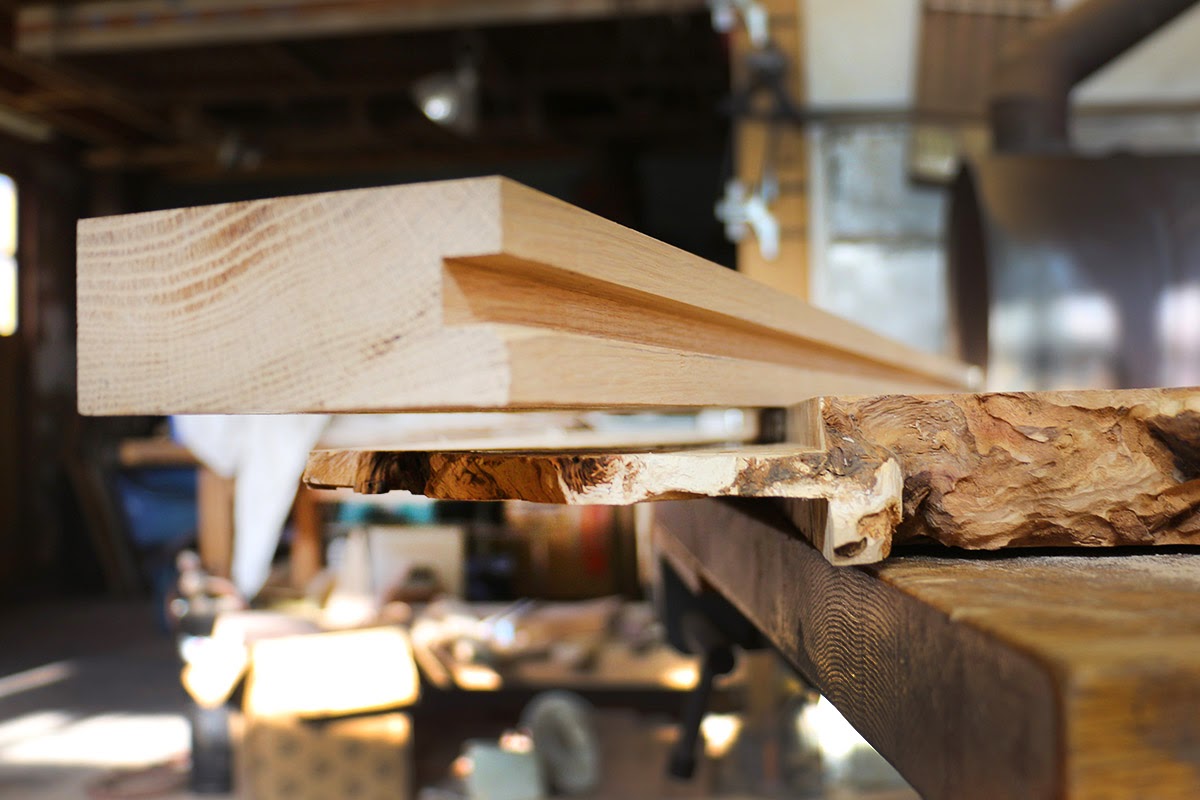 We used a fence jig that clamps onto the end of the slab from both faces to ensure that the cut is exactly the same on both sides. Then, we used the router with a straight-cutting bit to carefully create a long 1/2" thick tenon across the ends of the slab by cutting down from both faces. The tenons were cut to be longer than the breadboards are wide so that we can make tongues that go all the way through the breadboard ends for strength and to accent the joinery. 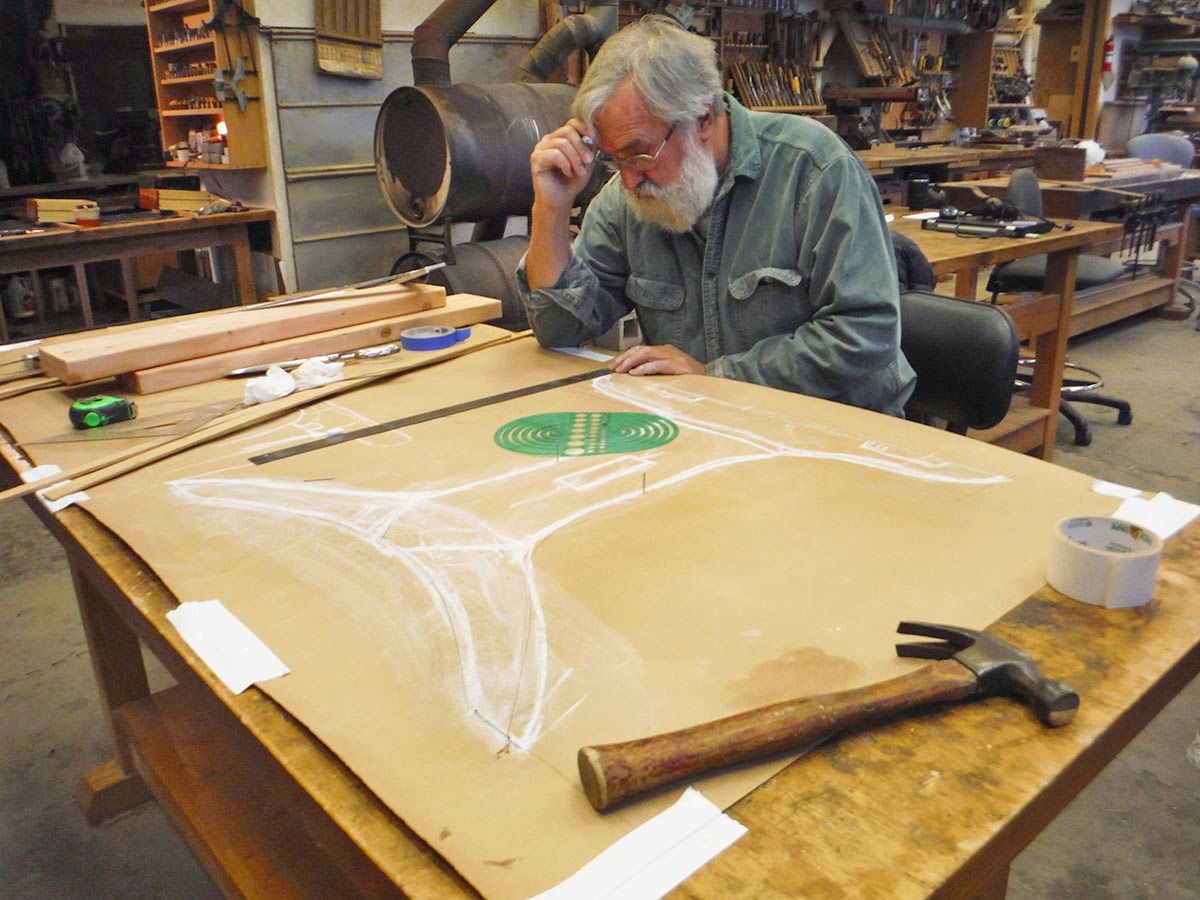 Meanwhile, brainstorming of the base was underway. As the table will accompany a built-in banquette style seating arrangement, we needed a base that was easy to slide in around and provided leg/foot room from at either end. While searching and sketching up ideas for a simple, curved, trestle-style base, we broke out our Sam Maloof book for inspiration. If you are unfamiliar with Sam Maloof, do yourself a favor and treat your eyes to some of his beautiful woodworking. Ultimately, plans and patterns were decided and drawn up for Jeff's sketch you see to the left. 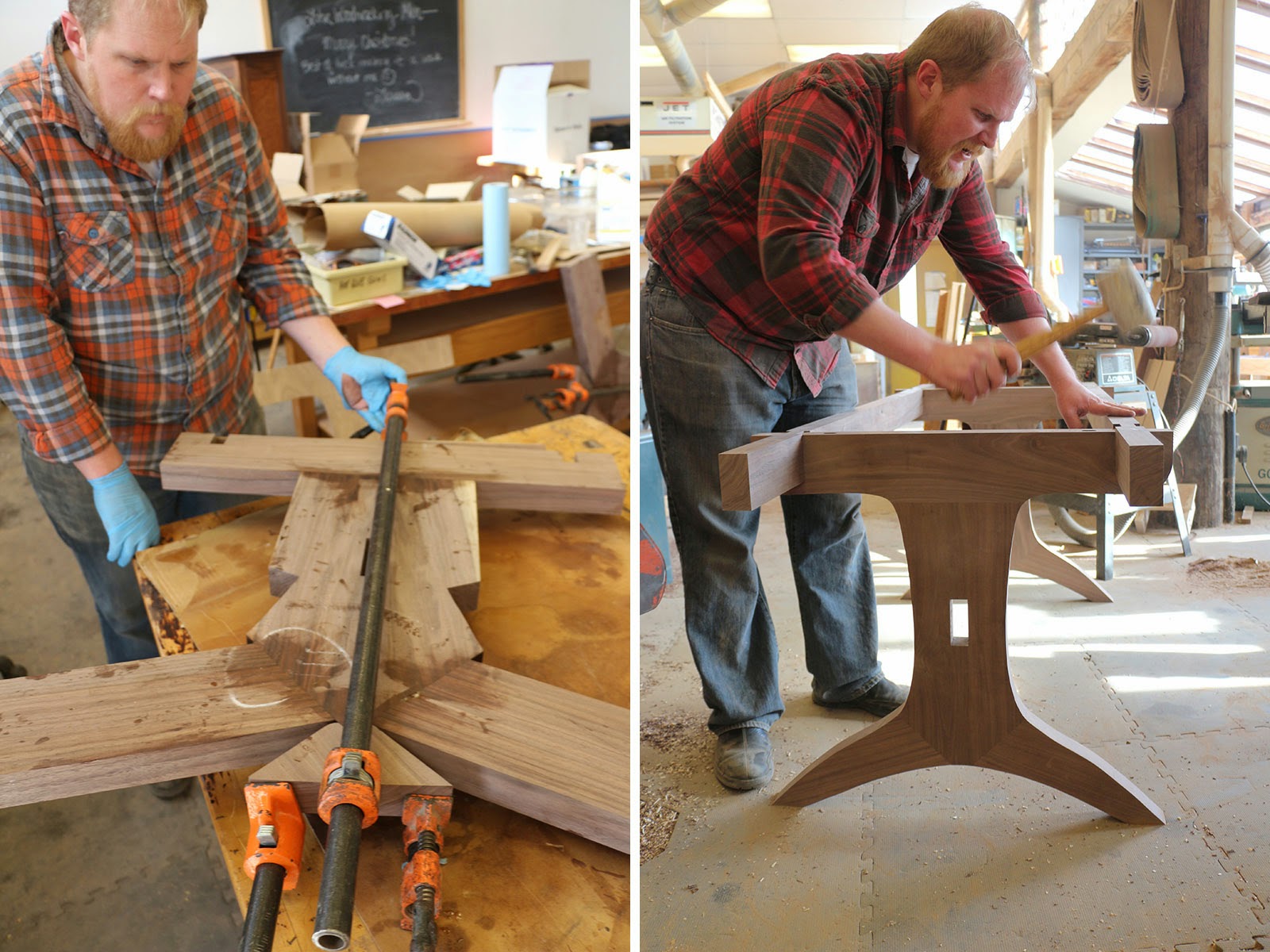 Using the patterns to ensure they were identical, each piece of the base was cut to shape, then joinery for the top rails and the mortise for the trestle was cut into the base ends. From there, the individual pieces were glued together with floating tenons and plenty of epoxy.

The long rail supports that connect the ends, and soon attach the table top, were cut to rest perfectly into the top edge of the base ends. And, already, the base stands on its own. Today, work begins on the trestle itself that will run through the middle of the base ends.

With that, you are officially caught up on our progress on the Pirro Live Edge Brown Oak Burl Dining Table. Taking only a brief hiatus to welcome 2015, we will otherwise be hard at work on this project so look forward to another update soon on how it comes together! Until then, Happy New Year to all! Cheers to a new year, new adventures, and new woodworking projects!