Greetings and a belated Happy Thanksgiving from us at Lohr Woodworking! 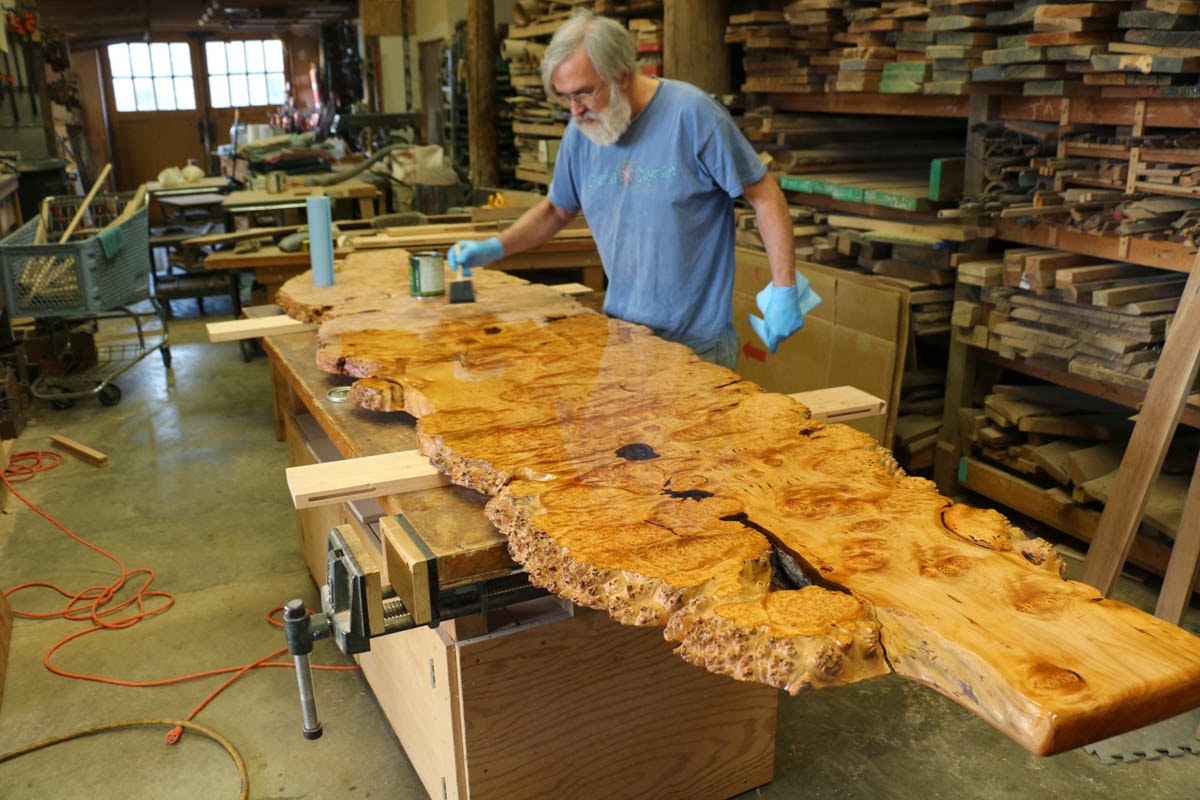 We are hard at work on the three live edge tables we have been commissioned to make for a Vik Hotel tucked in the hills of Chile. In my last update, we had joined two Bigleaf Maple slabs creating a coffee table with a curved joint held together with floating splines, dovetail bones, and West System Epoxy. Then we removed the bark and sanded her down. Since then, the 12' slab has been treated with boiled linseed oil to bring the unique, detailed burl grain patterns to life. The oil was left to absorb into the wood for a week before we started the finishing process. Jeff is using General Finishes Arm-R-Seal semi-gloss applied with a foam brush to the surfaces of the slab. The top of the slab will have 4-5 coats when all is said and done to ensure that it will protect against the plentiful wine glasses that are sure to grace it's surface. In between each coat, we carefully sand with 400 through 1500 grit to smooth and even the surface before applying the next coat. 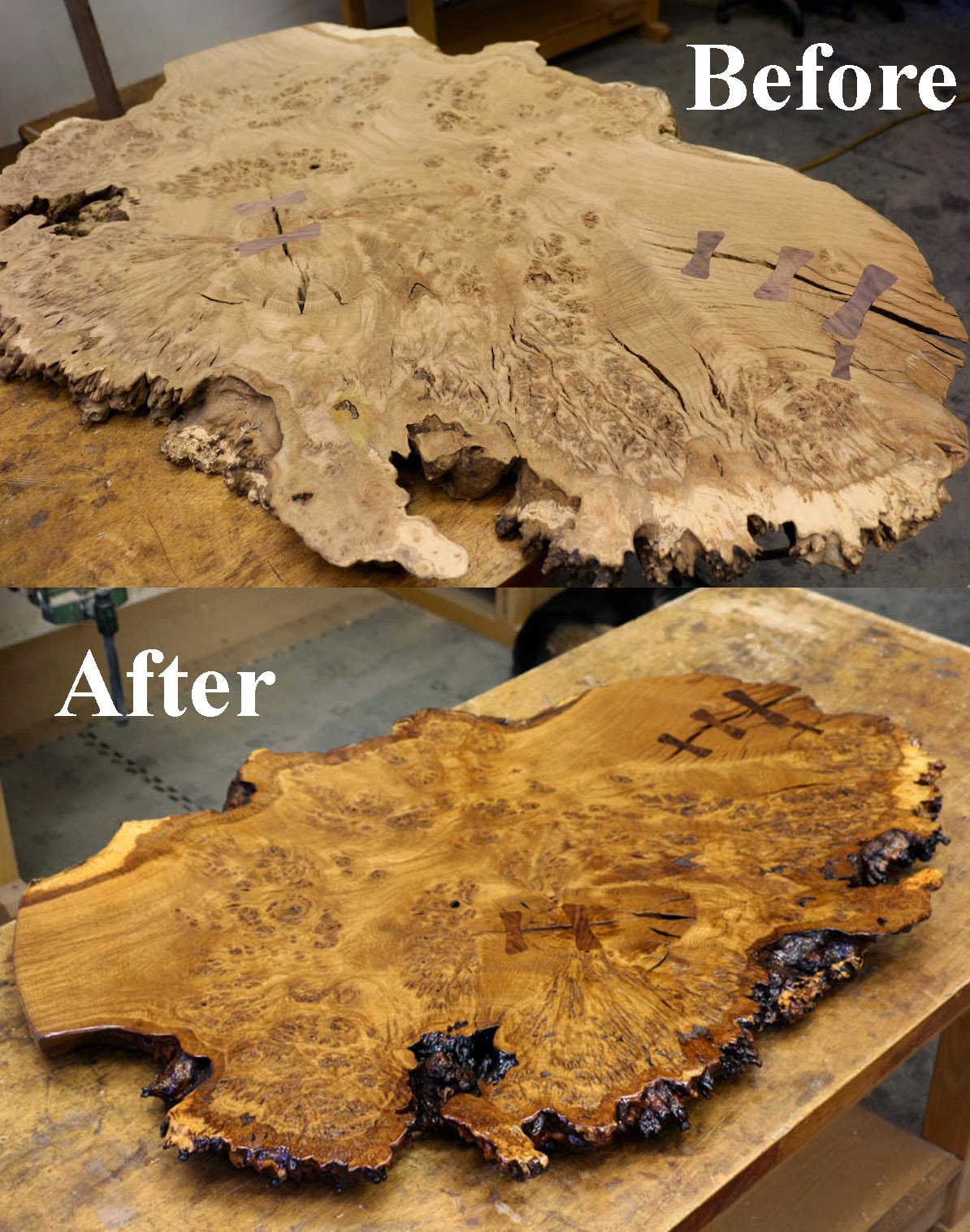 Aside from the coffee table, we have been in the midst of creating a small table for the library at the hotel. Another burl slab provides such interesting and lively grain patterns. We tended to the natural splits with a series of small walnut bones.

You can see in the photo to the left, the slab has such a beautiful shape and live edge. In the vein of George Nakashima, we have chosen to leave the natural voids and crevasses as they are. The alternative would have been to fill the voids with epoxy and crushed bark but it was decided that the textured spaces marry too well with the splits to fill them.

This slab, like most of our furniture, was treated with boiled linseed oil. You can see in the 'before' and 'after' photos to the left what a world of difference the oil makes. The slab was then finished with gym seal finish and is currently awaiting the final rub out (using 0000 steel wool and mineral oil to smooth and reduce the shiny/glossy appearance) and the construction of it's base! 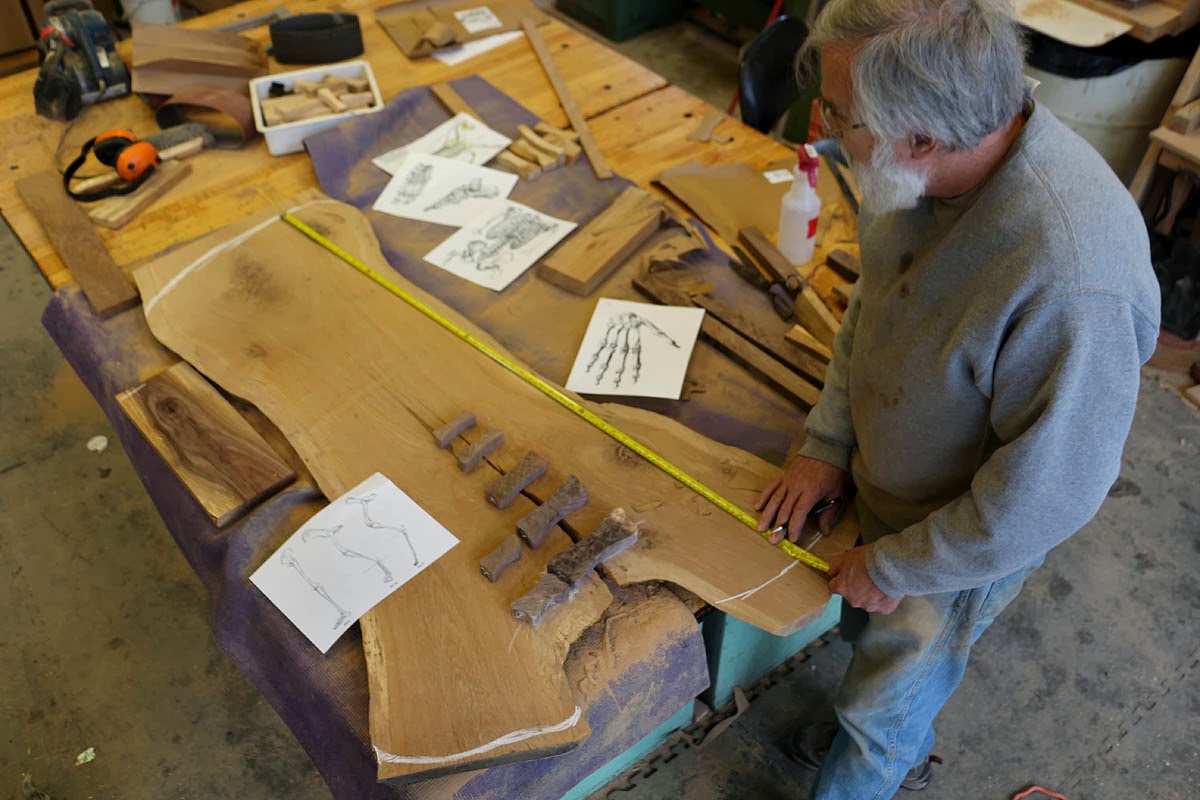 The third and final table in the works for this project is a Pennsylvania Brown Oak crotch slab. As the slab was dried, it developed a large split down the center of the crotch but the shape and size were right so, we got the chance to be creative with more bones! Jeff printed some inspirational, skeletal images so we could cut bones in shapes as true to life as possible. As they are structural additions to the 'flesh' of the wood, it is important that they are beautiful and strategically placed. He carefully selected pieces of figured walnut to cut the bones from and designed their shapes and placement. 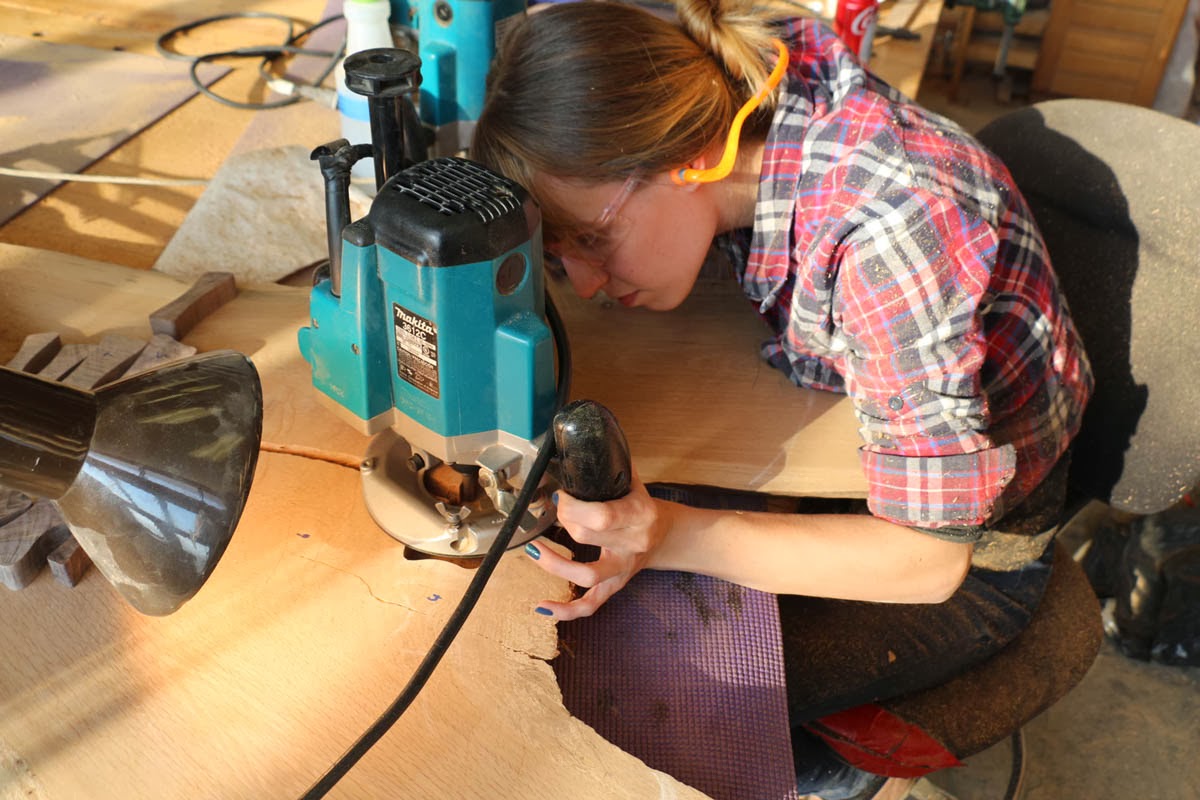 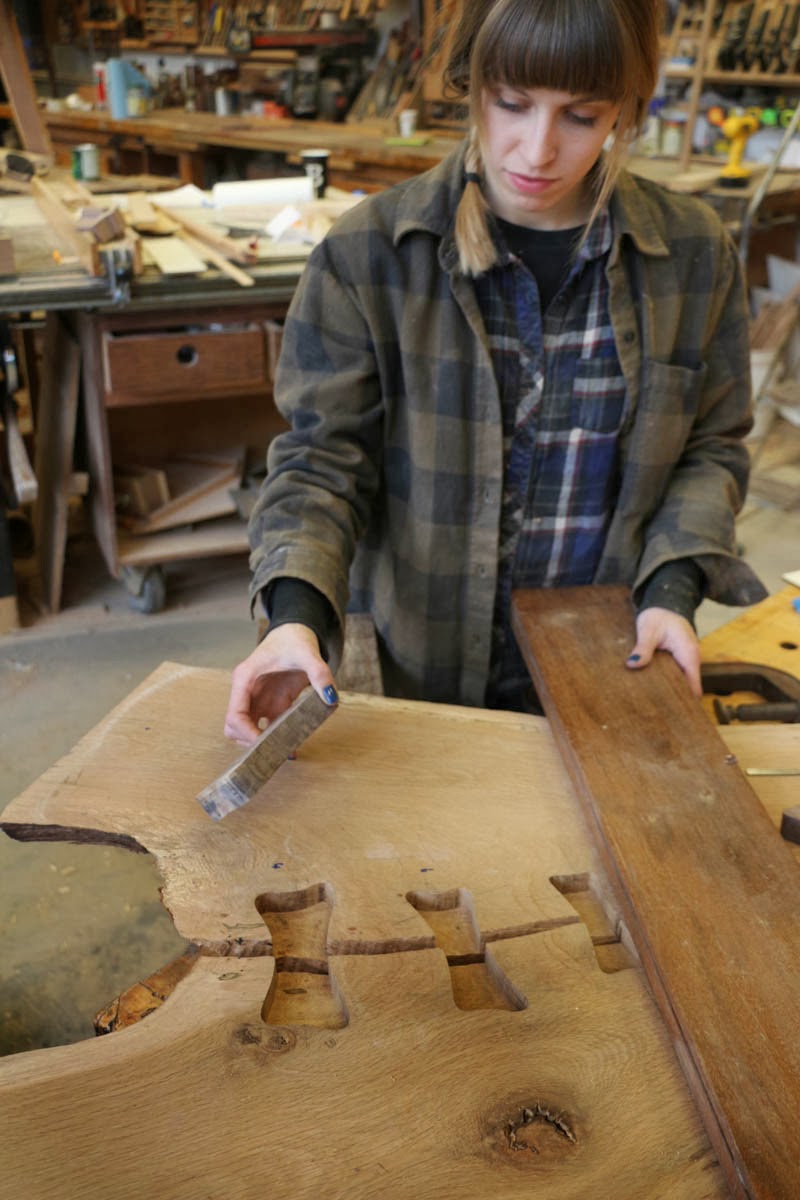 Next, it was my job to take to the router! After the bones has been cut and shaped, I double-face taped them in place and traced carefully around their edges with a marking knife. When the outline was clear, I removed the bones and loaded the plunge router with a 3/8" plunge bit with the depth set to roughly 3/4 the thickness of the bone itself. I set up desk lamps so ensure that I had a most-than-necessary amount of light shining on my work area since the router cuts need to be incredibly precise. I then carefully routered out the space within my outlines, getting to within a 16th of the knife line.


My final passes cut out the material right up to the outline, watching carefully as the fibers split away from the knife lines but doing all I could to avoid going beyond them. From there, I would test the fit of each bone keeping in mind that the goal was to have them fit as close to perfectly as possible. The bones needed to be snug in their holes (enough that they should need to be tapped in with a brass mallet), but not so tight that they would split from the pressure of being glued in. 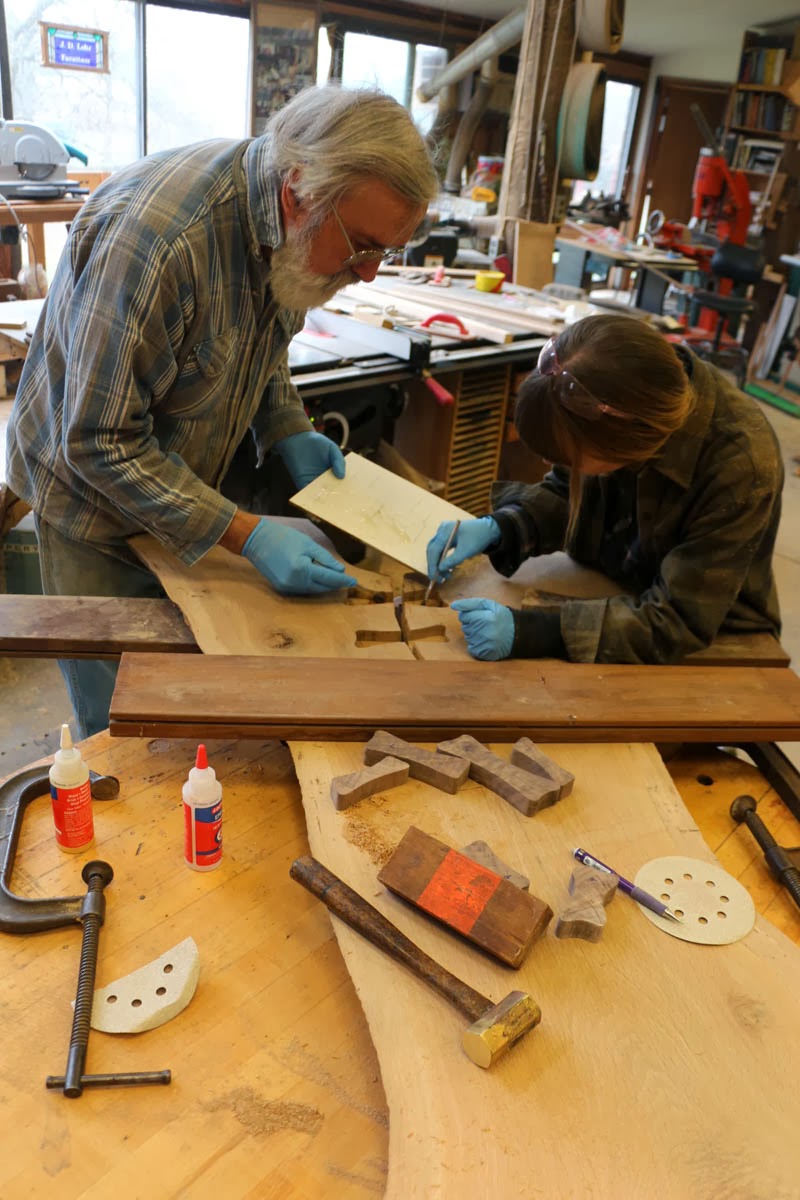 You can see to the right that when I was finished, the bone slots were shaped for each individual bone and didn't cut all the way through the slab. These bones will serve as a strong structural element to hold the split from getting wider with time and wood expansion/contraction. The board I am holding in my left hand was what we used to apply even pressure to the bone as we lowered it into the slot for the final glue-up.


And then came the glue! We used a two-part epoxy to hold the bones in place. After trying the 5-minute epoxy on the first bone, we realized that it was too thick and the open time wasn't quite enough for us to feel confident that each bone would be bottomed out and placed perfectly before it started to tack. Onto the West System epoxy we went! Although the dry time for the West System is longer, the consistency was much easier to work with and it allowed us ample time to set the bones just as we wanted them.

In the photo to the right, you can see our brass mallet and hammering block on standby to tap the bones into their slots. The two boards underneath and on top of the slab were pulled together (like a sandwich) with c-clamps and helped us to lower the bones toward the edge into place evenly and slowly. It was important that each bone bottomed out into its routered slot so that they fulfill their role as structural and strong additions to the piece. We want to make sure that 100 years from now, the split in this slab remains harnessed, un-extended, and beautifully treated. 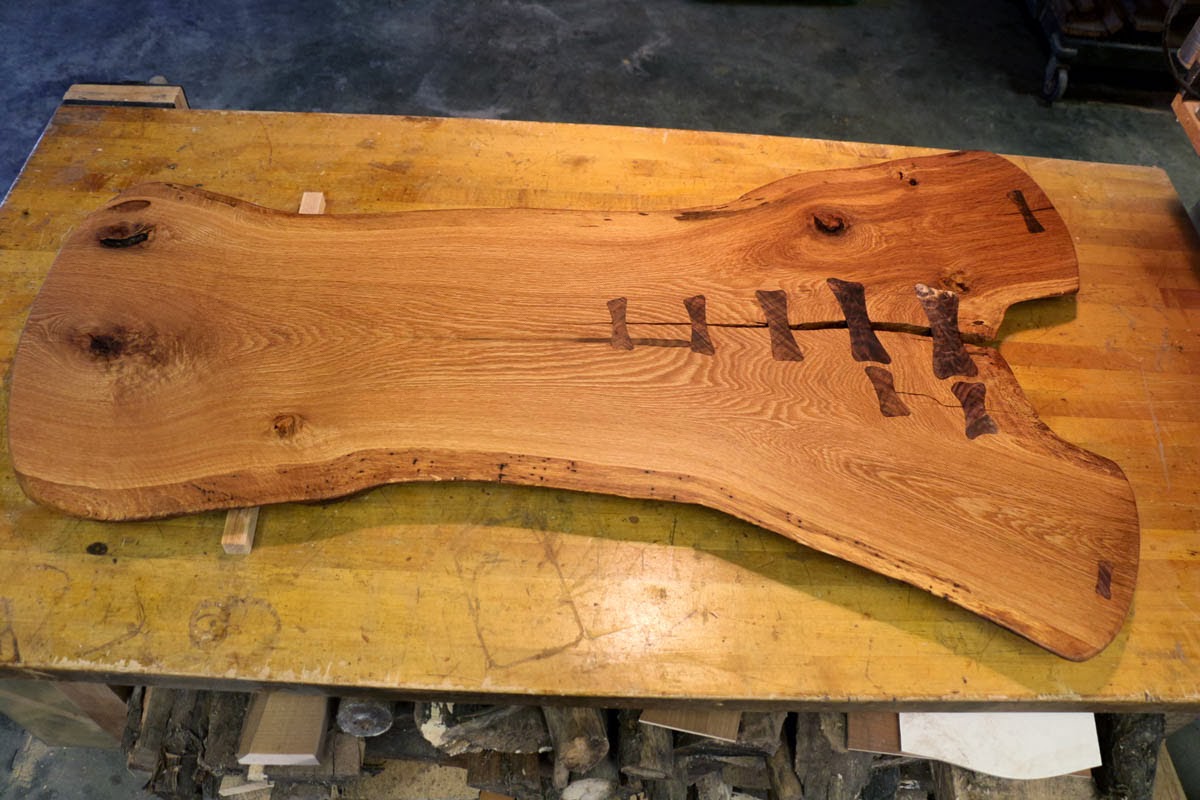 Finally, after the epoxy had a day to dry completely, we belt sanded the bones down to be level with slab's surface. The entire slab was then sanded with 80, 120, 180, and 220 grit sandpaper via a random orbit sander. The blunt ends were rounded with files and sanders as well to create the soft, round ends you see to the left. The live edge was de-barked and otherwise left in it's natural state.

And, for the third table in a few weeks, we treated the table top with boiled linseed oil. The brown oak slab now lays drying for the week before we jump into applying finishes to its surfaces.


Now that the table tops are nearly complete, we are onto the design and beginnings of their bases! Look out for an update soon about our current Practical Woodworking course as well as the base construction for these beautiful tables as they make their way to completion!
Posted by Unknown at 11:36 AM 1 comment: