By day 4 of class, I have learned so much it seems as if we have been submerged into a world of wood and I finally (sort of) know my way around it. It's nice to have classmates around learning and experiencing the same confusion, anxieties, increasing comforts and immense excitement with me. 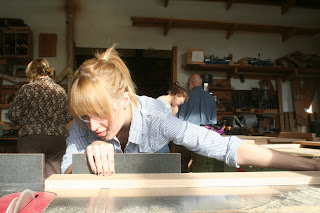 When Jeff says, "Today, you need to cross cut your skirt boards to their correct lengths and joint the edges to make sure they are right angles", I know exactly what he is telling me to do. To the right, you can see how the day began for me. Just as Jeff instructed, I used the table saw to cross cut my skirt boards. These boards will fit into my legs using the mortises I cut into them two days ago. It was important to make sure that the pairs of skirt boards matched perfectly in thickness, width, and length so that the table would be a proper rectangle. 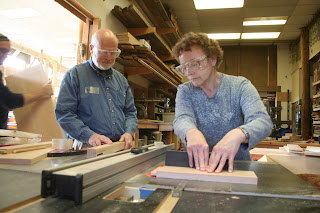 In order for them to fit into the mortises, however, we needed to cut tenons into the skirt boards. Celesta is doing just that in the picture to the right. Using the table saw again, we cut the male part of our puzzle pieces (formally and properly known as tenons) out of the edges of our skirt boards. This process was tedious only in the fact that we had to make sure that all the boards were cut the exact same way so they could fit into the exact same-sized mortise holes we drilled the day before. 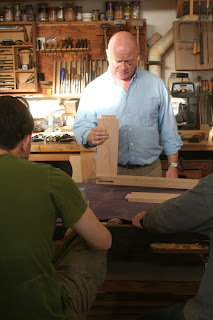 Eoin demonstrated how the tenon should fit snug into the mortise. Naturally, it isn't always so simple. Some tenons will be too thick, some too thin, and some too long to fit just right into their mortises. We were taught several methods for solving such problems. Using chisels we can shorten the length of the tenon if it is too long or if the cut along the shoulder is raised preventing the skirt board from fitting snug against the leg. We learned to use hand planers to lessen the thickness of the tenons but were advised to be weary of how much wood they take off because a tenon can go from too thick to too thin in a hurry. When we need to take off just a bit of thickness, we were taught to use the cabinet scrapers we had conveniently learned to sharpen the day before. It is a delicate process making a tenon fit properly into it's mortise, I must say. We made sure to fit each tenon to the mortise it will be glued into when we finally glue the table together. 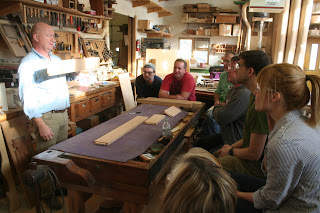 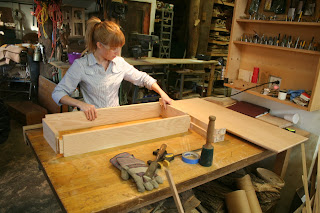 In order to know which tenon paired with which mortise, we needed to decide how we wanted out table skirts to be arranged. Here we are as a class (because the teachers are building a class table as we are building our individual ones to model how things should and/or could go as the process progresses) deciding which faces of our skirt boards we want to show from the front, sides, and back of the table. We talked about how grain is most appealing to the eye; tighter grain toward the bottom. We discussed how any flaws might want to be hidden towards the inside of the table so they aren't obviously visible when it's in our homes. Once we had decided on the arrangement of our faces (which I was doing in the photo), we labeled our tenons accordingly. Each tenon was marked with the leg number it would fit into and an arrow indicating which side was going to be up. Now, we could start fitting our tenons into their matching mortises. As I said, a delicate process. I am still not finished with fitting mine. I will be finishing that up today! 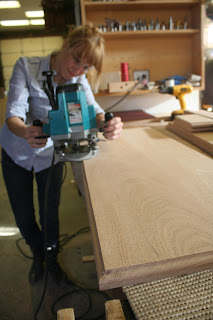 Now it was on to adding some flair to our table tops. We planed and jointed them to perfect rectangles the previous day so they were ready to look like table tops. After a lesson in varying router bits, we were sent on our own to decide what kind of shape we wanted the edge of our tops to have. By the time this picture was captured, I had already done my end grain cuts but, during Rob's lesson we were told to start with the end grain so that when we cut the length, any little fibers that were left from the end grain cut would be removed. We also took a smaller router to the sharp table edge that was left to round it a bit. Because I know we will be sanding the edges sooner or later, I decided on a relatively simple edge so I wouldn't have to work the sandpaper into difficult crevasses. I must say though, some of my classmates were more inventive with their edges and they look so great! 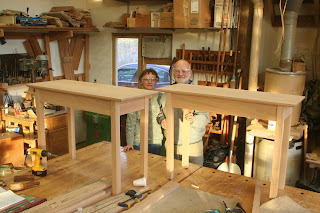 Celesta and Duane were the first to have their tables together! See how great they look! There is still finishing and optional skirt detail to toy with but, the overall product looks so wonderful. Like I said, my tenons still need some work before I can see what mine will look assembled but, Celesta and Duane gave me a little preview and a boost of motivation to get those tenons fitted quickly. We only have today and tomorrow left of class so I am anxious to learn how to finish these masterpieces up. Until tomorrow, readers, I bid you a happy Friday!
Posted by Unknown at 8:16 AM