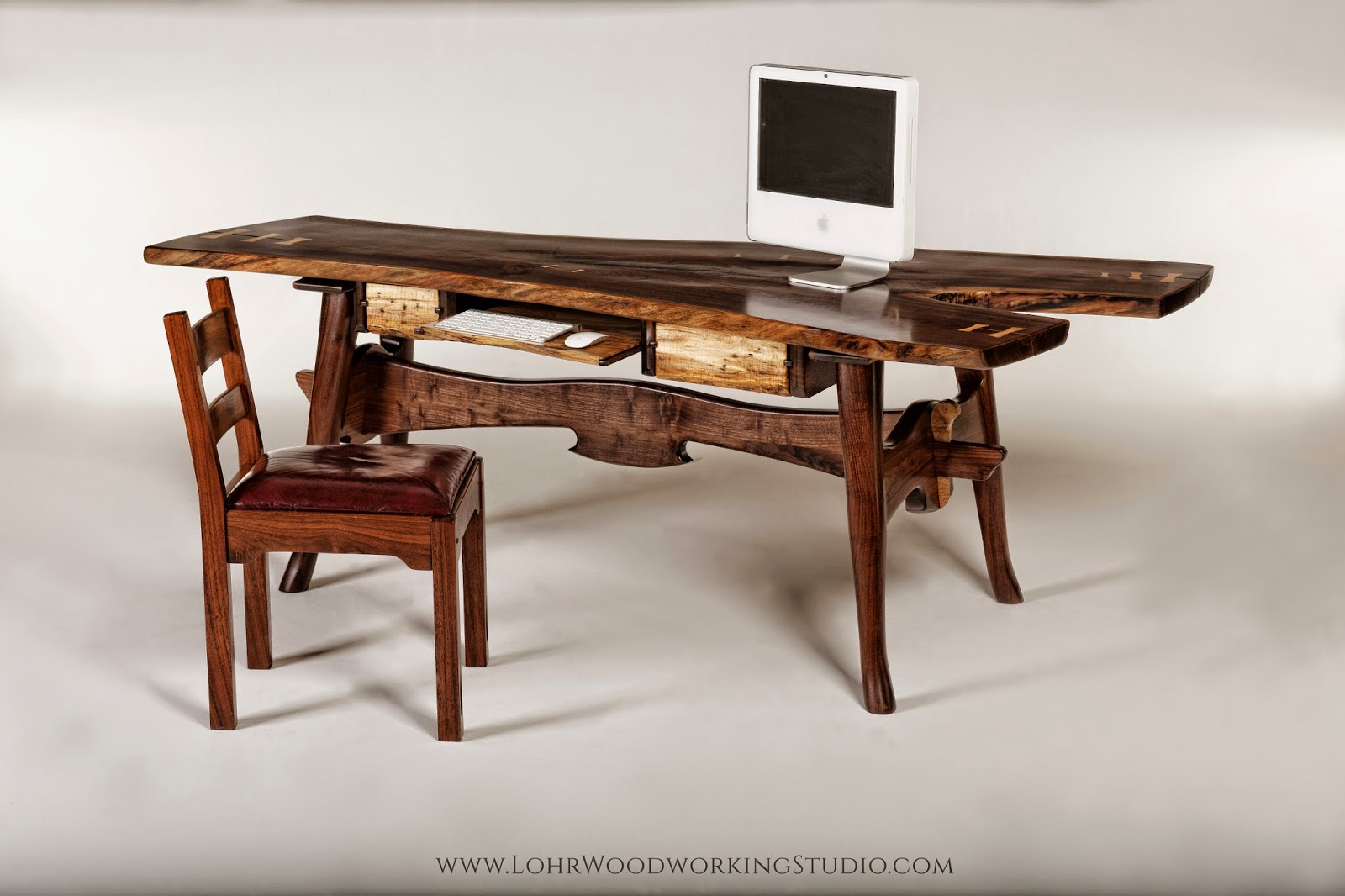 Well, folks, we've done it again; By which I mean we have finished two one-of-a-kind live edge tables AND we were lucky enough to get Eoin in here and take some stellar photos of them. Woo! 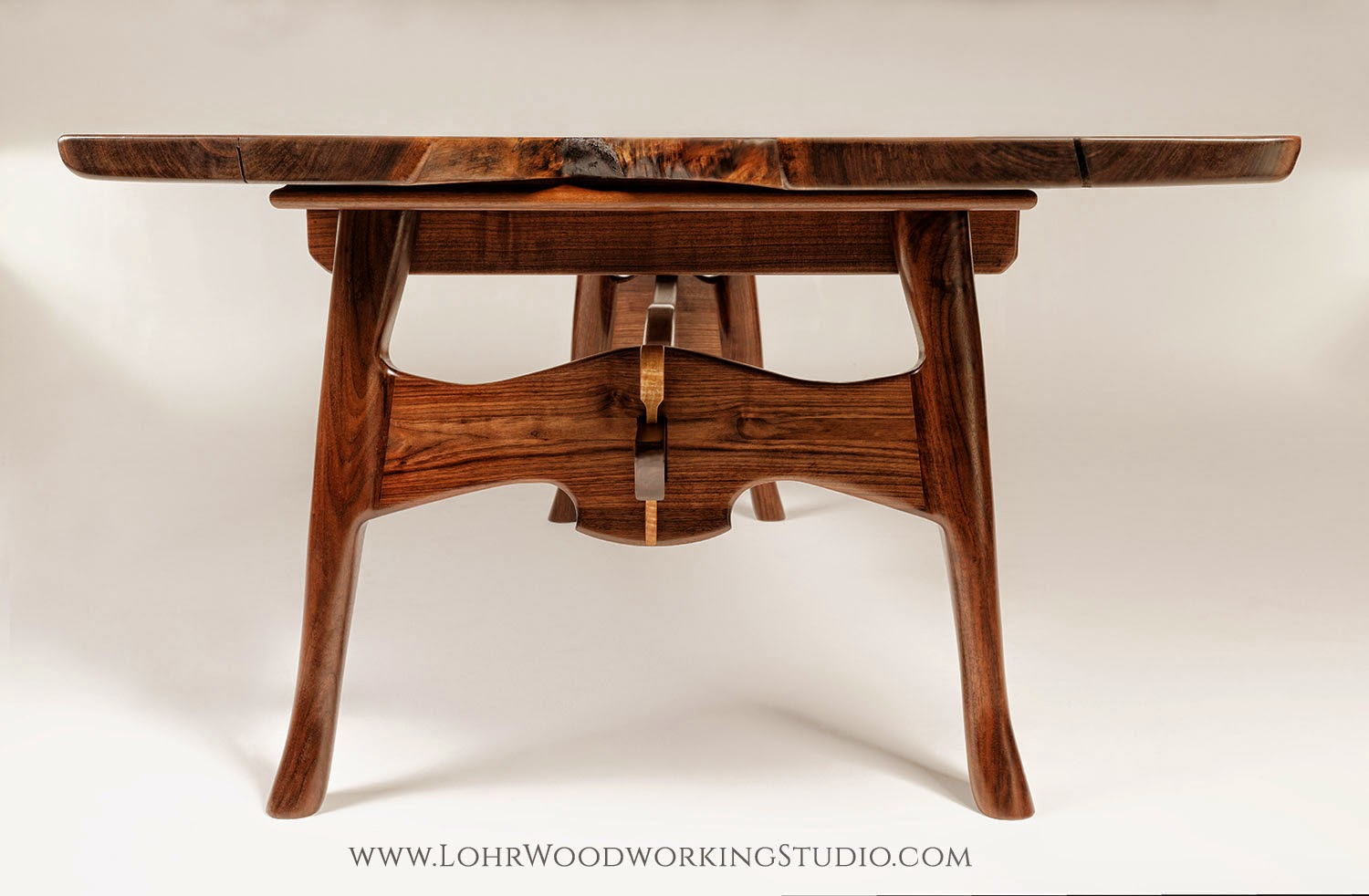 Both tables are actually desks and are made with two slabs from the same walnut flitch. The first desk is appropriately named "Great Expectations" because it's destined to be a surface from which only great things will be previous post describing the "in progress." 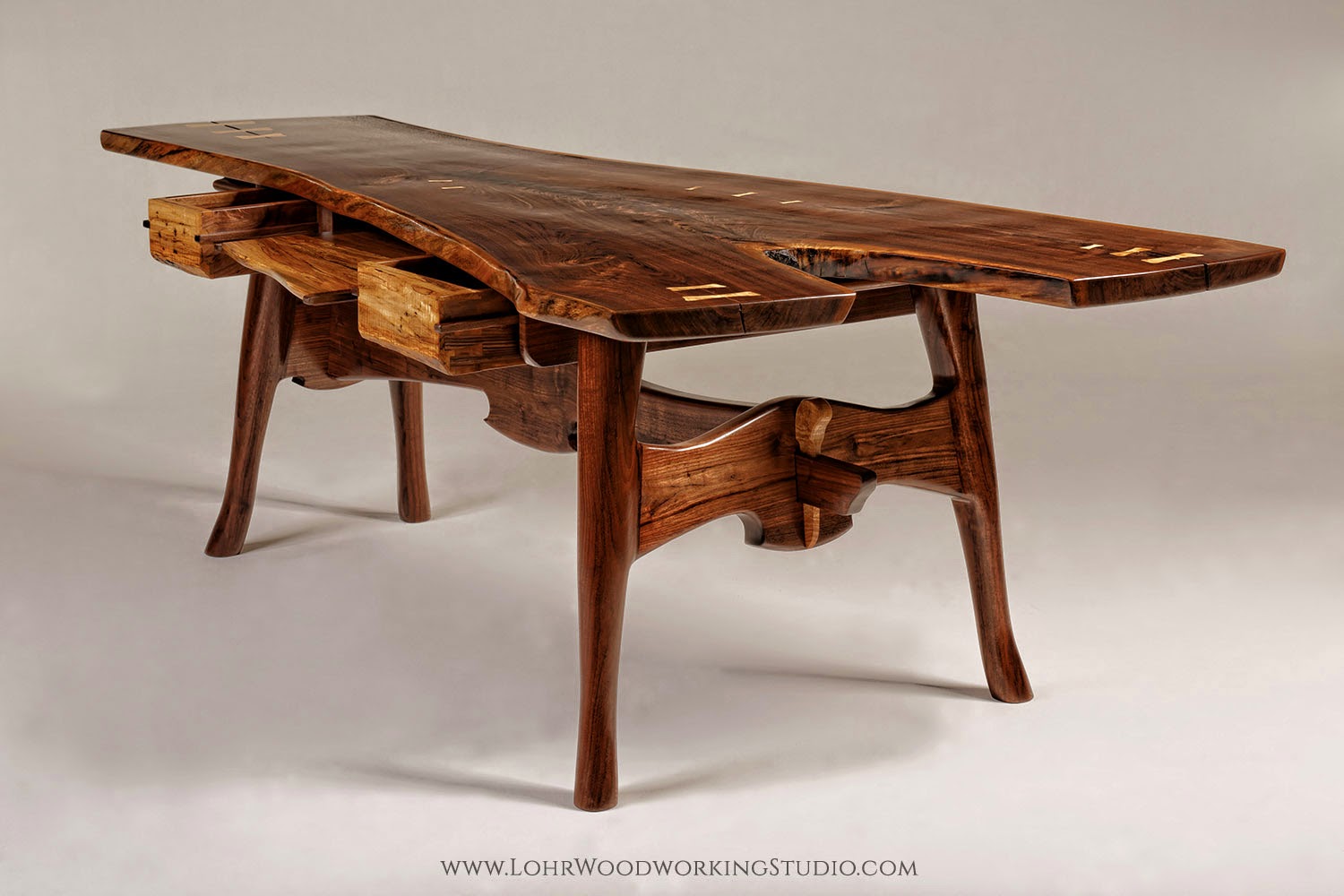 inspired and produced (I'm rooting for a grand novel to be written here). It has a solid, live edge walnut top with curly maple inlaid dovetail bones strengthening and repairing the natural splits. The trestle base has hand-sculpted legs courtesy of Jeff's awesome shaving horse skills. This version of the desk comes complete with two drawers and a keyboard tray that can be pulled from either side of the desk. The drawers have some of Rob's signature dovetails and are made with spalted maple drawer fronts that curve to marry with the natural live edge of the top. For more detail as to how we tackled the various parts, read my

The second desk is in the same vein as Great Expectations, less the drawers and keyboard tray. With a simpler look, it maintains the same flowing trestle base design and solid live edge walnut top. The legs were hand-sculpted just the same but, the dovetail bones in this one are made from highly figured walnut so they have a subtle, striking effect. Both slabs have a long, beautifully feathered grain pattern (and amazingly free of splits or checks) down the center of the crotch.

We're bringing these new fellas to Long's Park Art & Craft Festival! If you're in the area, you should come to the show because it's filled to the brim with America's best artists along with some tunes and food! 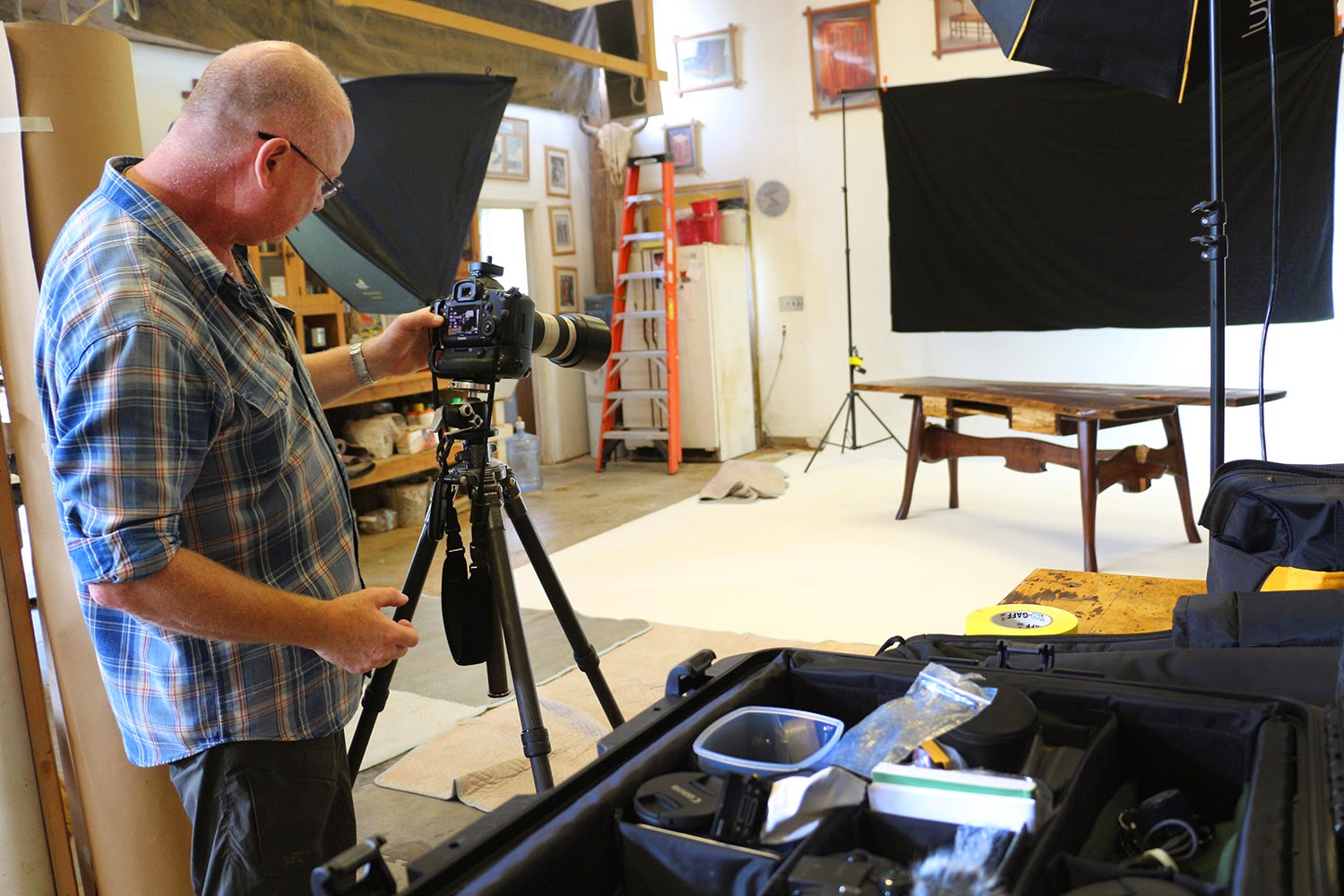 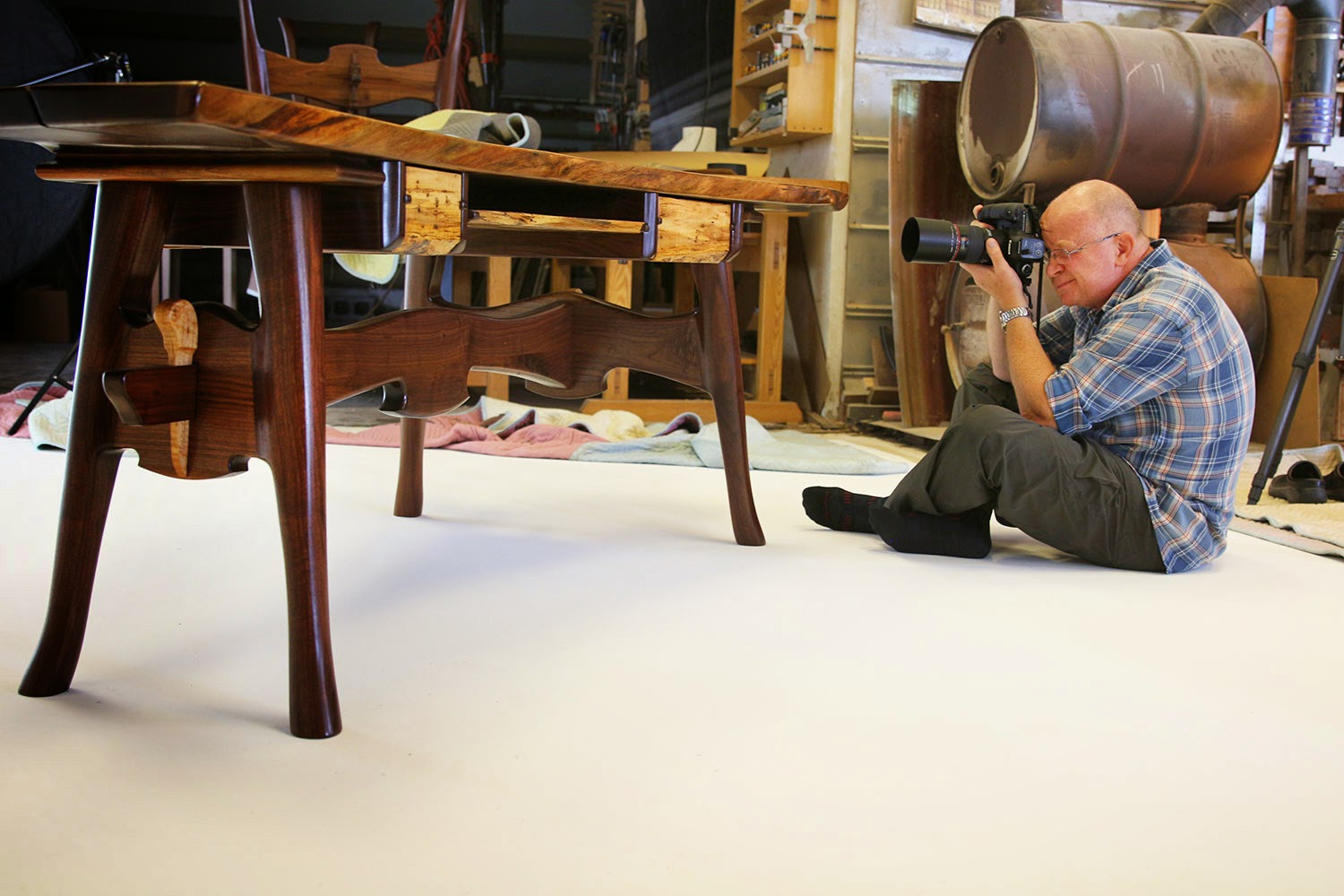 I've said it before and I'll say it again, we are lucky to have Eoin O'Neill as part of the Lohr Woodworking Studio team for more reasons than one. Above and beyond his admirable woodworking and teaching skills, this man knows his way around a camera! We work incredibly hard to create pieces that are as beautiful as they are functional but Eoin gets all the credit for capturing these stunning images of them to ensure their timelessness. Two weeks ago, we pulled up all the foam floor tiles and repainted the cyclorama wall white to prepare for the shoot. The 16' seamless wall takes up 1/3 of the shop so it's all hands on deck to prepare and maintain it's clean-ness for the days of the shoot. This time around Eoin spent two days documenting three live edge tables. And (surprise, surprise) came out with great pictures.

Thanks again for all your time, equipment transportation, and skills, Eoin. And, for those of you that can make it Long's Park over Labor Day weekend, swing by our tent to see these gems in the flesh! Until then, a happy Monday to you, internet readers!