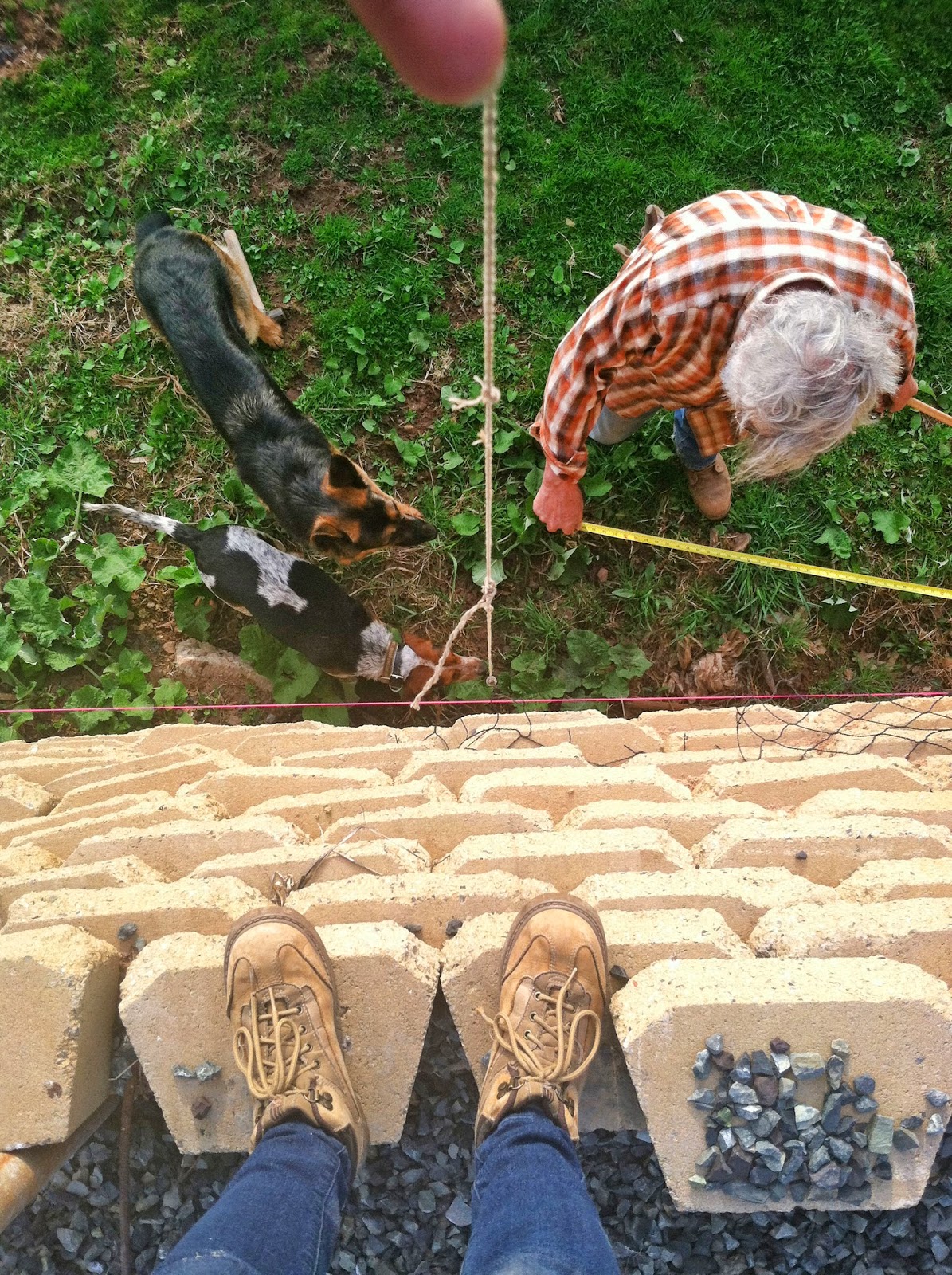 Once upon a time, a stone-filled ramp was built leading from the parking lot area at the end of the driveway up to the second floor of the sawmill building. The sides of the ramp were built with stacked retaining wall blocks. Unfortunately over time, and the added aid of the harsh winter elements this year in Pennsylvania, the stones compacted on each other to such a degree that the wall started to grow a bulge halfway down one side and the collapse of the wall was too real a possibility.

No worries though, folks, we are the Lohr Woodworking team and we are led by a master of all things practical. Jeff drafted a plan for us to use huge pressure treated posts and boards to create a strong, straight, stable box around the collapsing areas of the wall to fill with stone. For added strength, we would run cables between the posts across/under the ramp to keep them forever pulling inward. 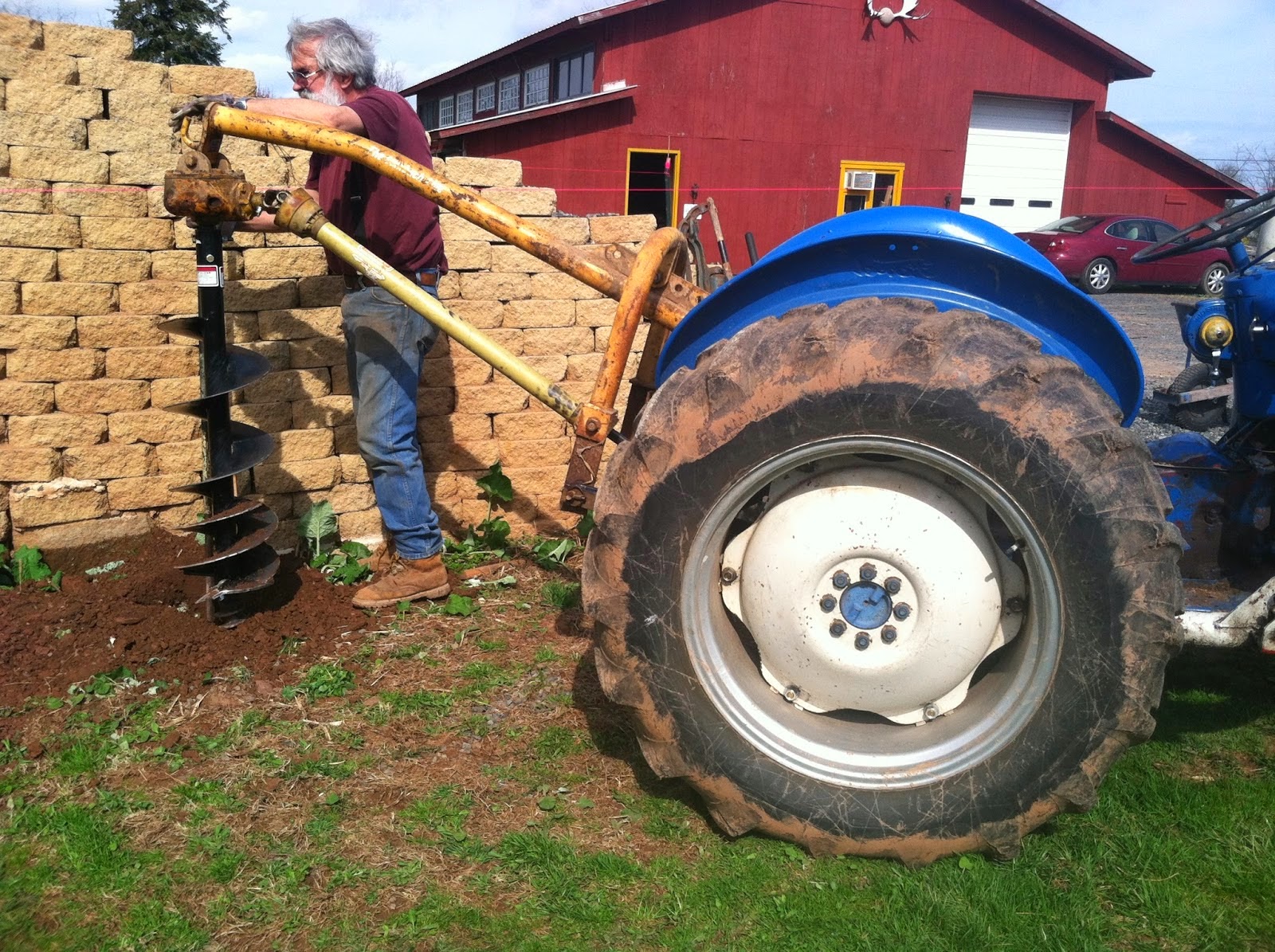 With a plan in place, we set to work. The first stage of "Save the Wall 2014" was measuring out the distance between, and placement of, the pressure treated posts. During this phase, I got my hands on a plumb bob for the first time.

After the post placements were decided on and marked with stakes, we called in the big dog- Trixie, the tractor. With a massive auger mounted on the back, she dug holes for the posts to be mounted in to. I have personally thanked Trixie for eliminating the alternative situation in which we would have had to dig out those 10, 3' deep holes with shovels. Plus, watching that auger plunge through PA bedrock was pretty impressive. 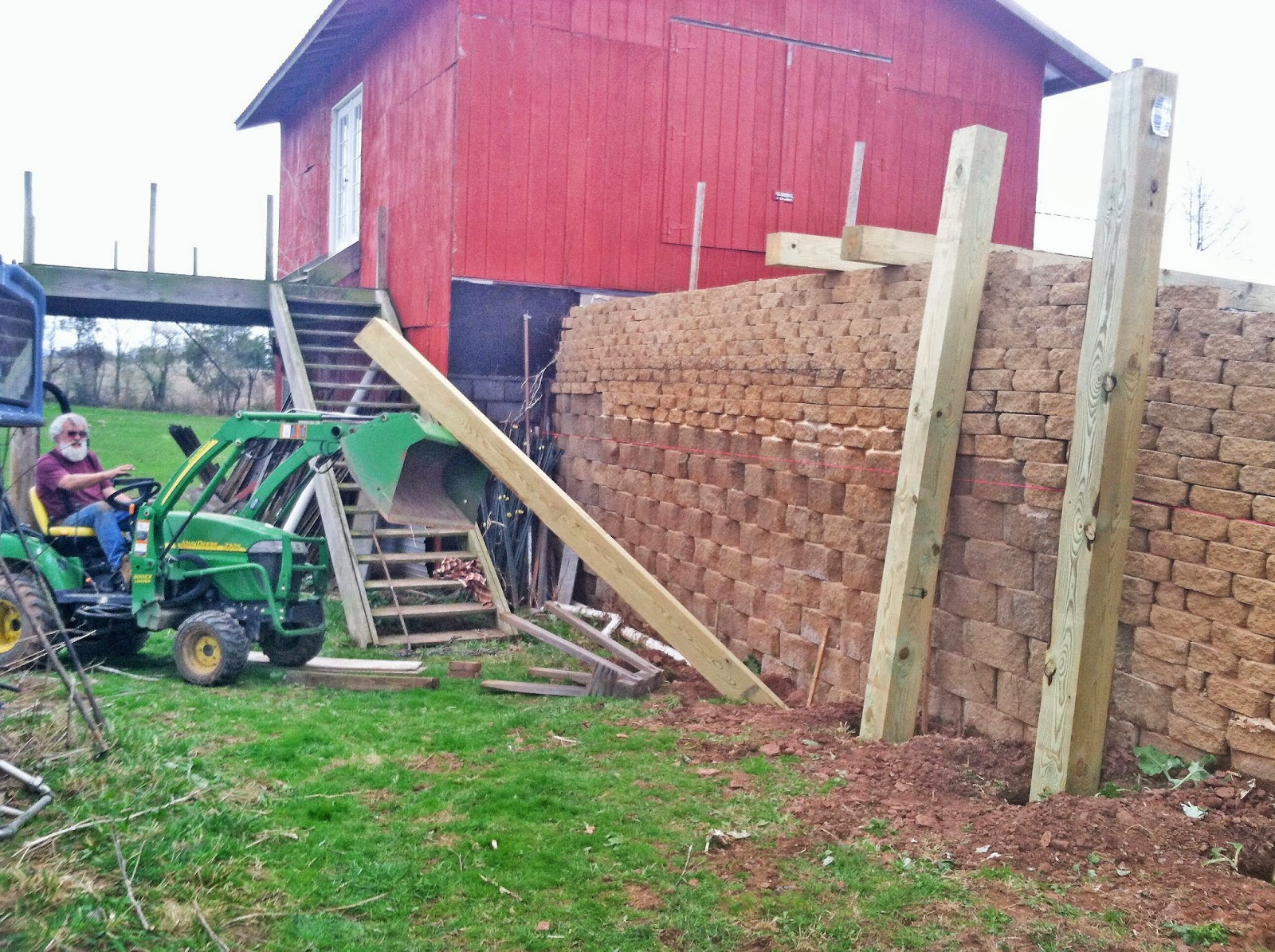 Once the holes were drilled into the earth, we were off to Home Depot to load up some pressure treated posts. With a trailer of posts and boards, we returned to hoist the posts up into their holes. Using the bucket on the tractor and some brute strength, we got them upright.

Then, we leveled the poles 90 degrees upright in all directions and held them with 2x4's and stakes. When they were all equally spaced and neatly in a row, we started mixing concrete; what a messy job, by the way! We poured a bag of concrete into each hole surrounding the base of the posts to keep them in position. 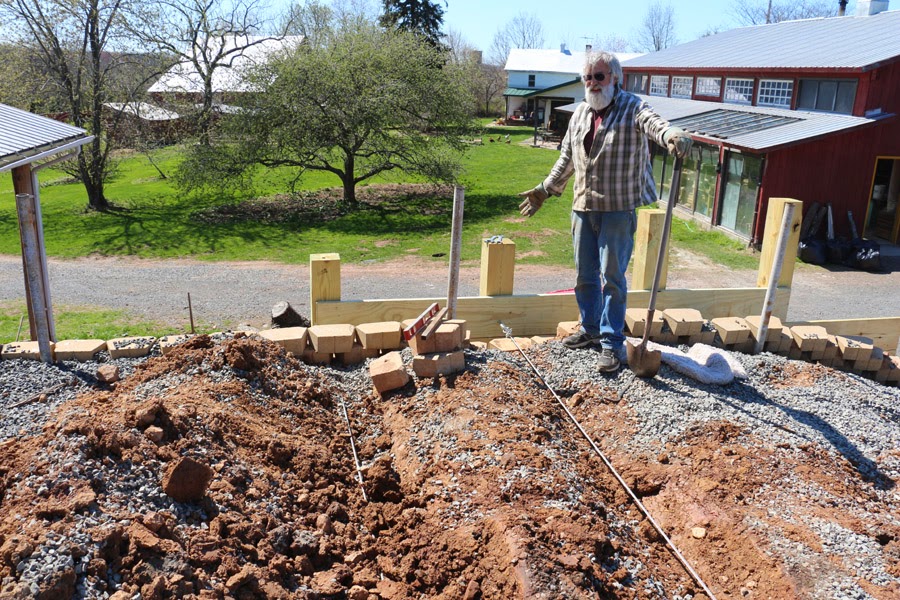 The posts were then connected to one another using long lengths of pressure treated boards to create a new, strong wall to support the collapsing stone one. We cut end caps from the boards as well to close off the areas into space to accept the tons of stone we were soon to dropped into them. 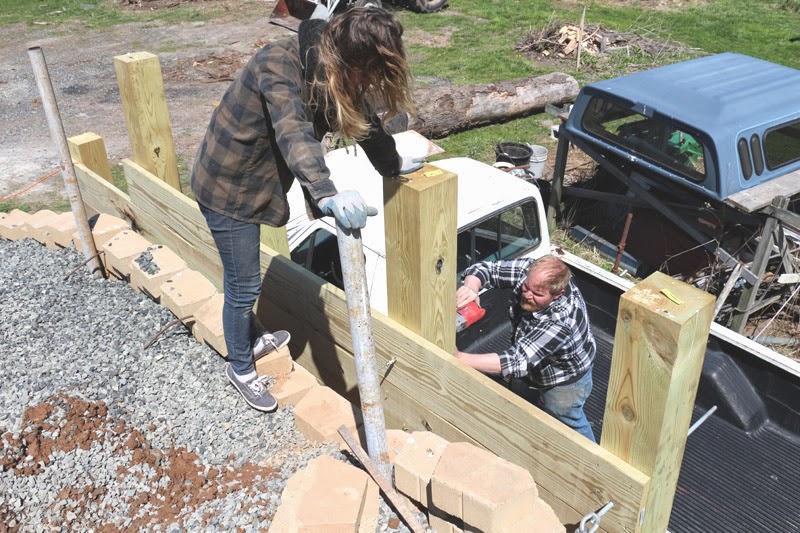 The strength of this wall-save does not stop here, though. To ensure this ramp will stand the test of time, Jeff decided it was best if we took the extra step to run steel cables between each pair of posts. First things first, Jeff jumped on the tractor again to dig 6" deep valleys across the ramp between the posts for the cable to run in; later they'd be buried with the replaced dirt and covered in a new layer of stone to smooth and level the ramp. Thanks to the spring season finally making it's way to the north east, we have been hard at work to dress up the outside of the shop. Our first mission- Save the Wall 2014. And, as you can see from the image to the left, we managed to get it up just in the nick of time. The vacant area you see between the bulging stone wall and the pressure treated posts is where the tons of gravel and stone now live to add pressure and support.

When the cables were all tight, we replaced the dirt that was removed to bury them and flatten out the ramp once again. We had over 60 tons of stone delivered the following day to smooth and level the ramp, parking area, and driveway. I had a grand ol' time driving the little tractor around with the iron drag rake in tow to disperse the stone evenly. The discussions have already begun regarding how we plan to decorate the new wall in all it's glory. But, as it stands now, it is a sigh of relief that the ramp will remain standing for years to come. 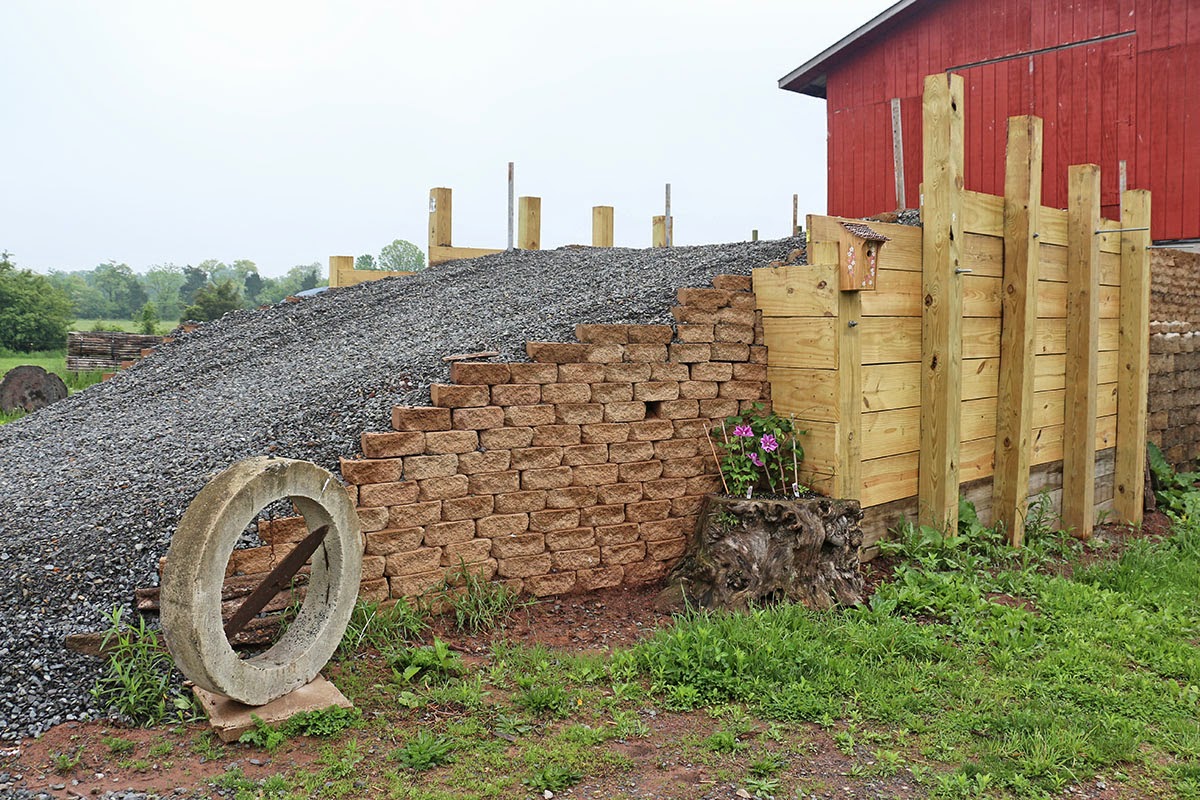 The upkeep of the Lohr Farm is an essential part of the Lohr School of Woodworking and Woodworking Studio being able to function and flourish year in and year out. Part of being a Lohr Woodworking team member means I am lucky enough to get the chance to learn about everything that goes into woodworking, milling, teaching, machine repairs and maintenance, farm/home repair and maintenance, landscaping, animal care... and, in this case, how to save a falling stone wall. Cheers to another practical and successfully completed mission at Lohr Woodworking!
Posted by Unknown at 8:10 AM