Because we are a woodworking school and we want nothing more to keep our students safe from any injuries as they learn the craft so, we are equipped with two SawStop cabinet table saws. Being a company who prides themselves in being "the world's leading maker of safe 10-inch table saws," our students, ourselves, and our insurers feel better having them around. And, better yet, we haven't encountered any incidents that disprove their claim to ensured safety [knocks on wood]. 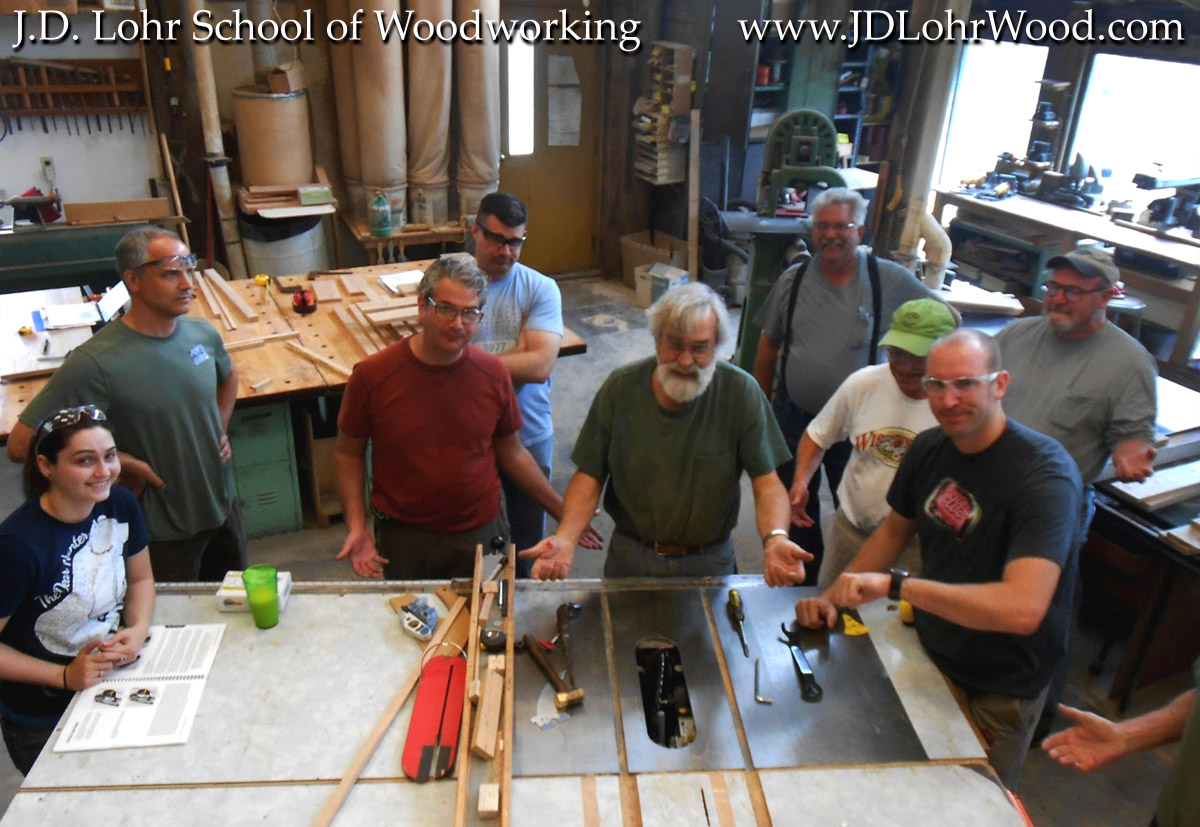 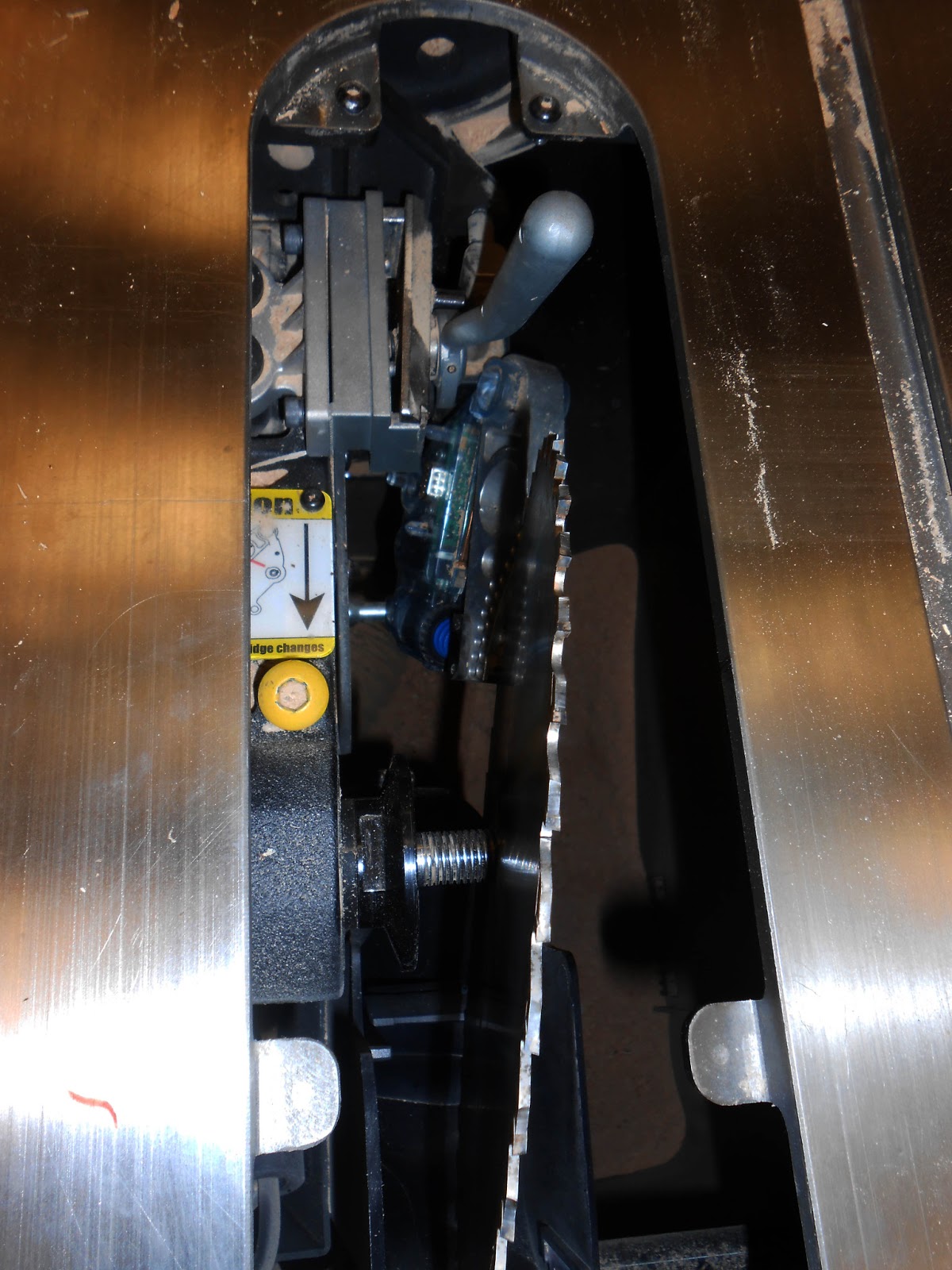 In really rough, basic, apprentice terms, the way the saw works is based around a system that monitors an electrical signal that is carried through the blade. If the system detects most any material that isn't wood, it throws a break cartridge into the blade to stop it and then pulls the blade below the table within milliseconds. It's pretty incredible if you watch the safety video.

From our experiences, the added safety is wonderful but, as with all technologies, there are times when they malfunction. On a few different occasions, we have experienced misfires when the cartridge is thrown into the blade thus ruining both parts even though there was no foreign material to trigger the reaction. One of these occasions happened during our class last week. And thus began the saga.

In this particular instance, it was a partial misfire so the cartridge was lodged into the blade and both were still locked into their place inside the saw. So, out came the crowbar amongst other tools to try and slide these things out of the saw whilst still being attached to each other. Although this was not the easiest of tasks, Jeff managed to wiggle the two pieces out and replace them (luckily we have spares for both) so the class could continue with enough usable table saws.

We sent SawStop the used cartridge and they were able to confirm it was a misfire and not a finger-saving attempt. 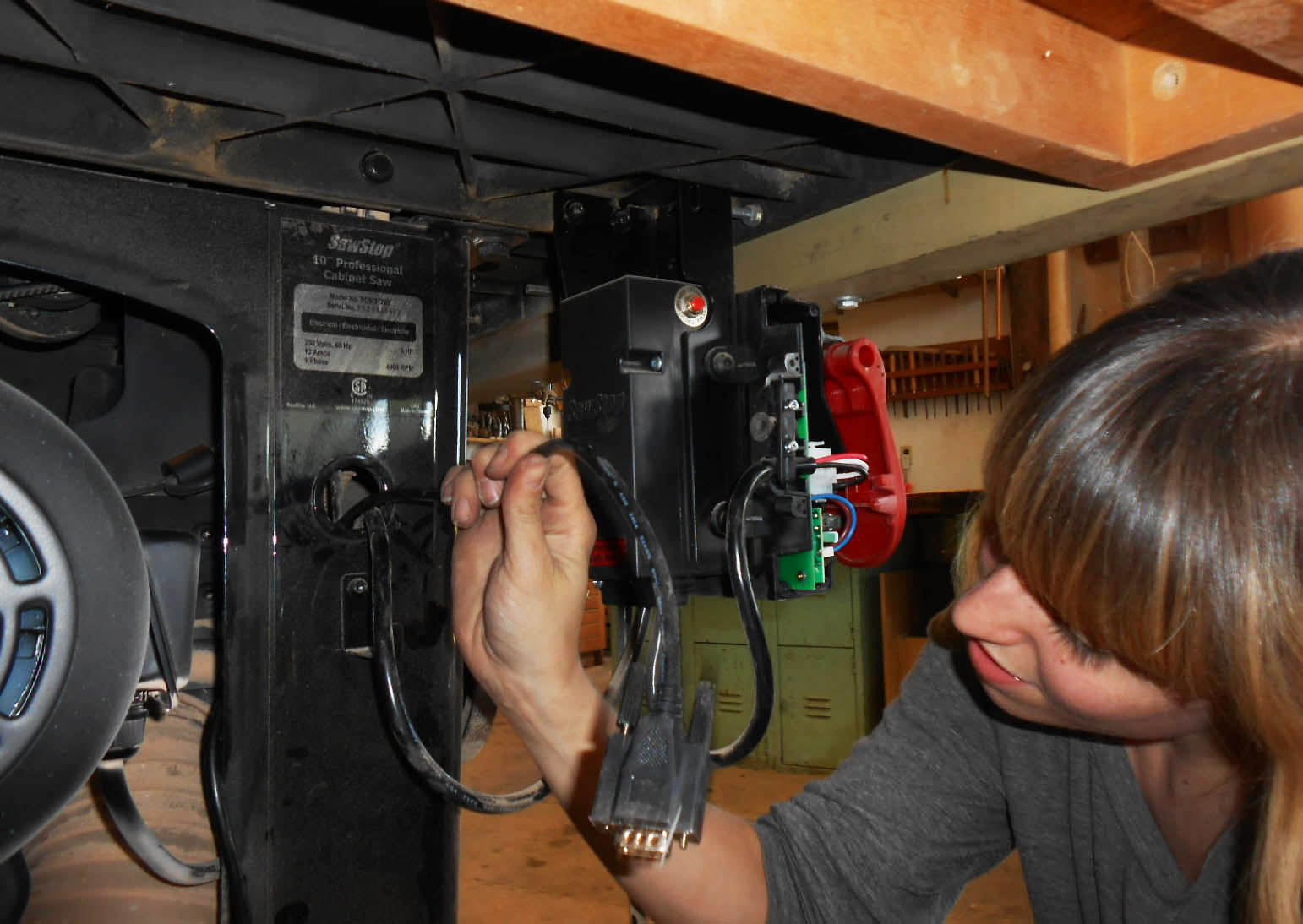 They were kind enough to overnight us new cartridges and blades to replace those that were ruined. With it, they send us a new cartridge cable replacement kit to wire through the machine in hopes to avoid any future misfires. And, yet again, my compact size was called into play. For most of the afternoon, I was climbing under, in, on, and around the table saw to place the new chip. 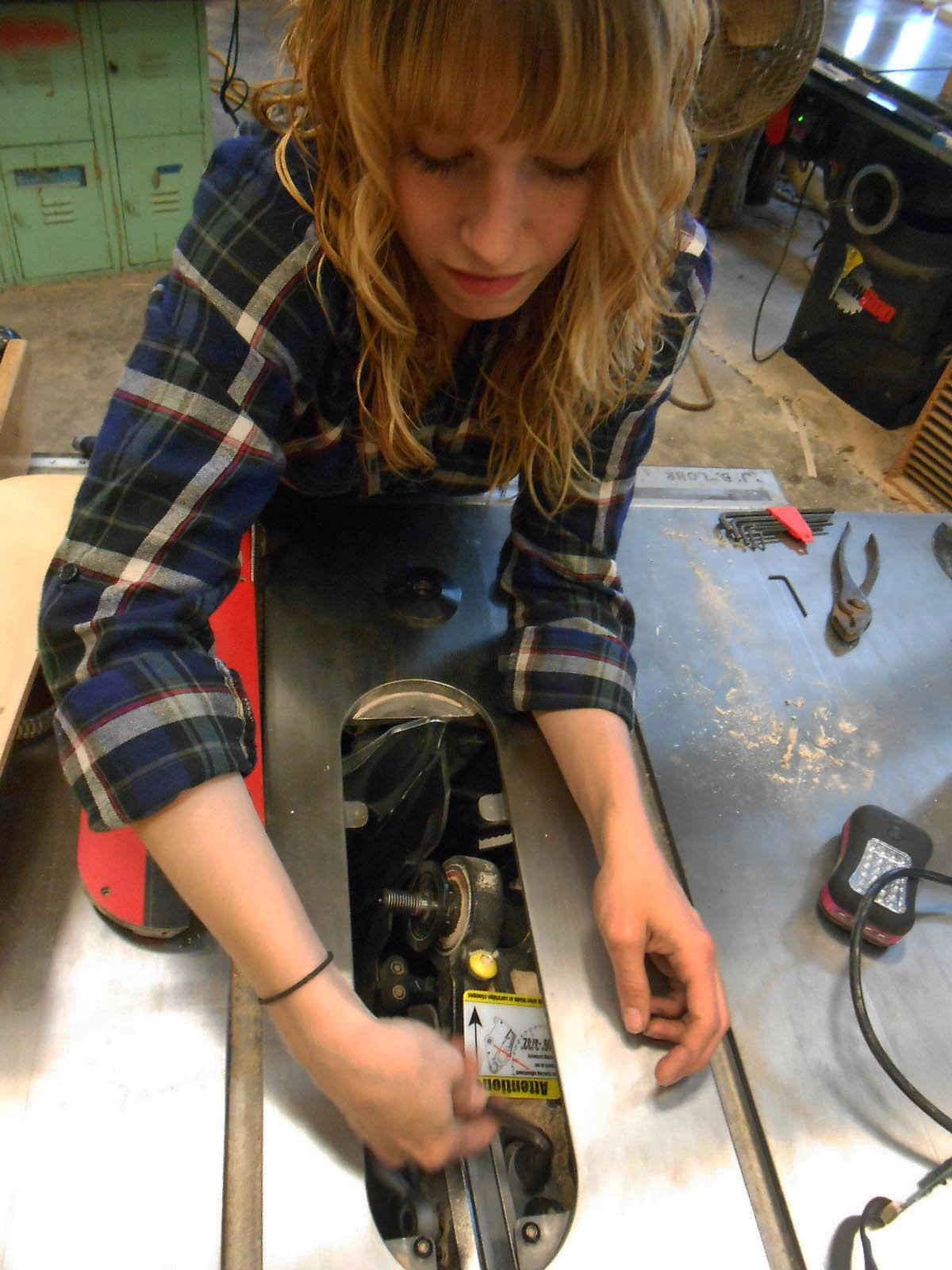 As you can see, I removed the switch box side cover and replaced the old D-sub connector with the new one. Then, I ran the cable through the
machine undoing and redoing the clamps that hold it in place throughout the inside of the cabinet. The best part about this task is that it's nearly impossible to see each of the small clamps so, I had to rely on my sense of touch to locate, unscrew, place, and rescrew the cable into the clamps.

From there, the cartridge connector needed to be placed into it's bracket. The bracket is found in a vertical plate below the saw blade where the cartridge lives when it's being used. Even with my child-sized hands, it took some incredible effort to use the Allen wrench to turn the screw whilst holding the lock nut behind. It was a Lohr Woodworking staff group effort to reach both sides of that plate. Tilting the saw back and forth, relying heavily on flashlights, and crawling under, on, and around the saw finally did the trick. 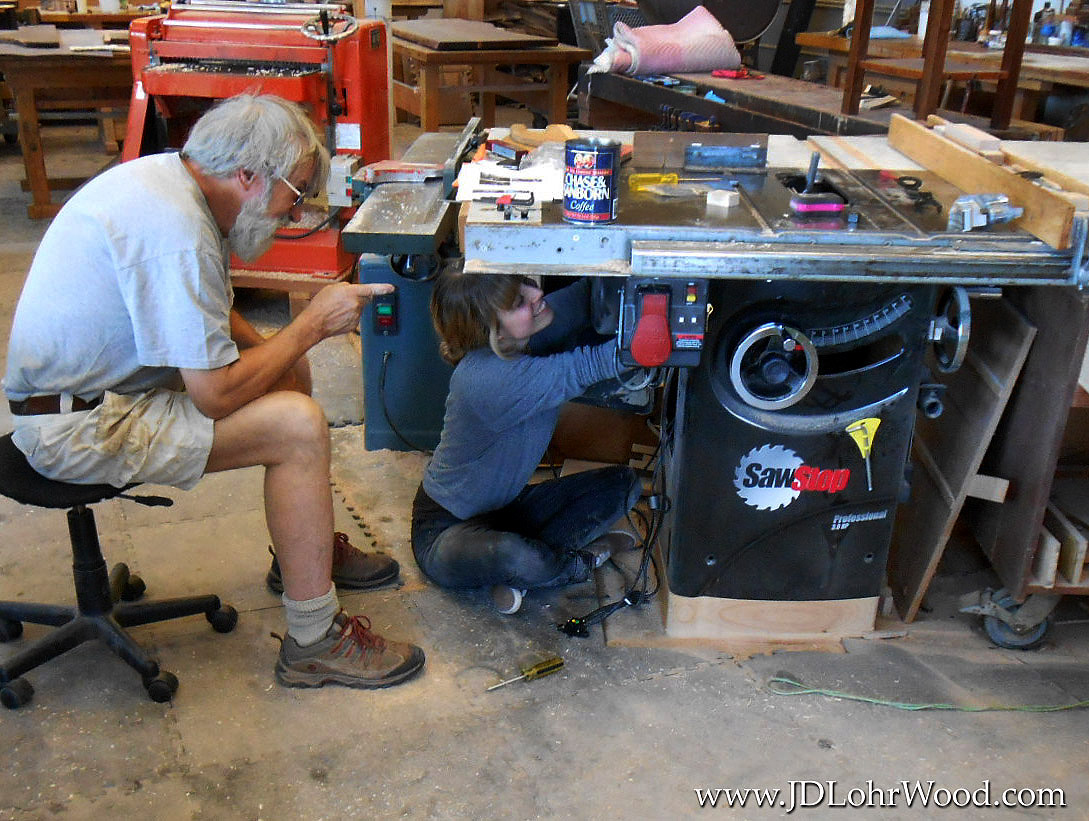 The final step was to use three tiny screws to put the circuit board into place. The afternoon ordeal came to a close when I pulled out the old cartridge cable, reassembled the splitter knife holder, put a new cartridge and blade in, and flipped the "on" switch. A sigh of relief came when the little green light illuminated but, the real test was turning the sucker on and hoping the brand new cartridge didn't fire because of a circuit chip disconnect that I had missed.

The moment of truth came and went as the blade spun perfectly. I am a long way from being a woodworking master but, I'll admit to a self-administered pat on the back for figuring out this high-tech machine. My relationship with the table saws just got a bit more intimate as I now (sort of) understand their inner workings. Thanks to SawStop for saving fingers and limbs on a daily basis but, moreso for giving me a really intricate and mechanical project to expand my brain this week.